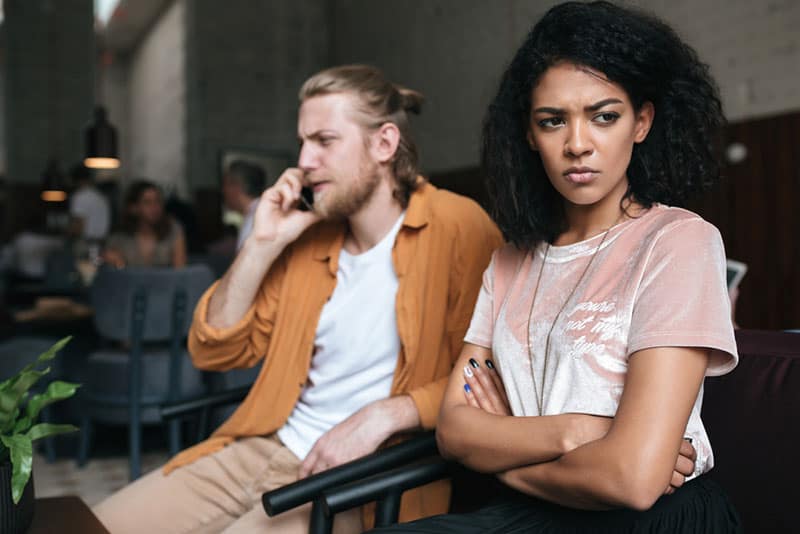 But you’re here reading this text because that is exactly the opposite of what you feel like in your relationship.

He is ignoring you, he’s ignoring your calls and your texts. When you need him, he’s nowhere to be found, but he appears when he feels like it.

Well, you see, this is not how a person who sincerely loves you will treat you. So, why on earth would you make him a priority when you’re clearly nothing but an option?

If you think this isn’t bothering you, it will in the future. Men like him never change for the better, if that’s what you’re thinking.

Men like him never have an epiphany and suddenly start caring about anyone other than themselves.

Face it, even though you’re making him your priority, he will always keep you as just an option.

Don’t let this realization hit you when it’s too late.

If you find yourself in a situation where you’re asking yourself what it is that you did wrong, then – I hate to break it to you – it’s already too late.

He’s already got you in his web and you’ve fallen for him hopelessly, making yourself his love prisoner.

With him not caring enough for you and you madly in love with him, you’re in the saddest relationship of your life.

And the hardest thing is that you want to break free because your mind is telling you that this relationship is unhealthy for you, but your heart is telling you to give him another chance because of the simplest yet most complicated thing ever – because you love him.

His behavior won’t have any excuses, but you’ll keep making them up for him.

No one else has the slightest idea why you’re doing this, why you’re putting up with him, because you clearly deserve so much better than him. Only you will believe the excuses you’re making for him.

Out of love and respect for yourself, get out of that relationship. No one is saying it will be easy.

You’re led by your emotions and you’re justifying and prolonging the relationship by doing so unconsciously.

Even though deep down you know there is no happiness with that man, you’re still in denial, desperately hoping for something to change.

You will never become a priority.

You are only a priority when you’re having sex and when he needs sex. But even sex gets old after a while.

What will inevitably happen is you’ll become uninteresting and he’ll find someone else to take your place. That’s what options are for.

Your relationship will never be what you want it to be.

Now you’re wondering: how is that possible? You’re wondering if I’m lying because he has his moments when he’s kind to you, when he makes you laugh, when he calls you to do things together.

But think it all through again…

You’re only doing stuff when he feels like doing it. He only calls you when he has no one else to call, right?

Whenever you suggest something, he turns you down because he has better plans. He never cancels those plans, he always quits on you.

So, why are you making him a priority when you’re just an option to him?

The relationship you’re dreaming about will never happen with him. Stop making him your priority when you can find someone who will make you his, too.

You have to learn to speak your mind; you have to demand what you want. Stop playing this game all men play. Stop allowing them to think they can get away with it.

If you don’t ask them right away to tell you what they want, they will string you along for as long as they can.

The end result of that torturous journey is you ending up heartbroken and him moving on to the next vulnerable girl.

You are a beautiful strong woman. You deserve anything you want!

Never stop when you reach a satisfactory level. You’re undermining yourself. You deserve to have anything you want and if you don’t stop at “just fine,” you’ll get it.

But don’t believe it’s going to be an easy road to take. You’re going to be tested at all stops you make along the way.

Just make sure you don’t keep yourself at one stop for too long, because you may get stuck there.

Like you can get stuck with this guy, just being an option and nothing else, ever.

I know that we all say this and I know you’re probably tired of hearing the same thing all over again, but it’s true. Don’t settle for less than you deserve because there is someone out there worthy of your love.

There is someone out there who will cherish you, respect you, make you laugh, love you, and always put you first.

But first, you must believe in your heart that you’re worth everything he’s not giving you.

Then you’ll find the one who will be everything he is not.