Being ignored sucks, doesn’t it? When something like this happens, you start thinking about things you did wrong. Is it something you said? Maybe you shouldn’t have texted that?

Weren’t you funny enough? Analyzing possible things that made him not text you back for a couple of days or even weeks won’t really help. Chances are that neither of them made him ignore you.

Experts have done research on this matter and bring you the most common reasons most men would agree with:

1. He was not really into you, to begin with

Men will always be men. If they are single, they will always try to flirt with as many women as possible. Every guy has his basic standards, and if you pass the basic criteria, he will take interest in you but only to some extent.

There are possibly other women he is dating or just texting that he finds more interesting or more attractive.

If this is the case, he is not even thinking about ignoring you.—“Oh, I like her so much, but she said she’s not into sci-fi movies so I have to give her the cold shoulder now”.

This will never be the case. If he really liked you in the first place, he wouldn’t let something like that stop him from texting you.

He put you to the side and will only text you when he gets bored with everyone else. Don’t let him do that—you deserve better!

2.  He is angry or hurt and doesn’t want to talk about it

If he likes you and you both started developing some feelings towards each other, one of the possibilities could be that you hurt him in some way.

He is now angry, hurt, or disappointed in you, but he is not man enough to tell you that. Afraid of making things even worse, of being hurt even more, he would rather not talk to you at all.

You can be taking the blame for making him feel that way, but it’s not your fault he is ignoring you. It’s his immaturity, ego, and pride that doesn’t allow him to confront you with the things bothering him.

It happens. It happens to everyone. You are overloaded with work and have no time for friends or family, or you have an important exam on the schedule this week and never even check your phone or social media.

This could be the case, especially if he is a career-oriented type or an artist who wants to dedicate his whole time just for his art.

Being with guys like this is hard in the first place, so it’s probably better for you if he ended it before it even started getting serious. 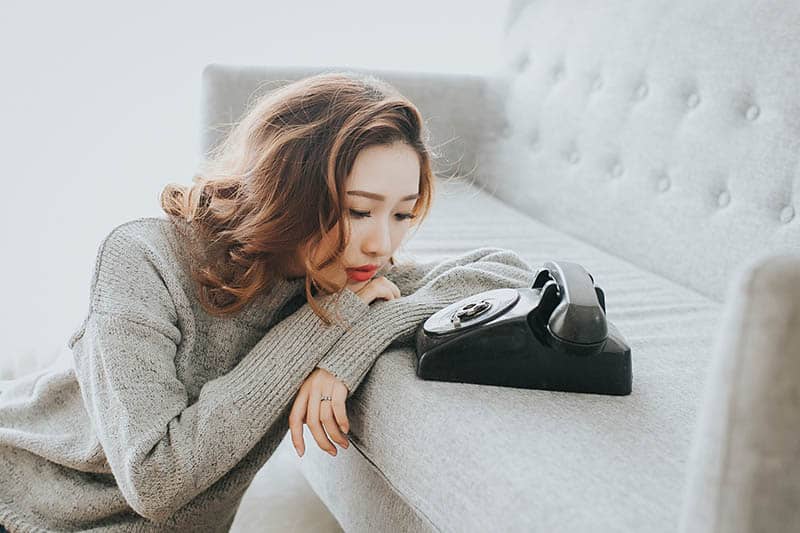 Not to say annoying. Problems start when a guy feels that he can’t breathe because of you.

Sending him messages the whole day long, and if he didn’t reply, you are calling him, and if he didn’t even pick up the call, you would bombard him with questions like “Where have you been? Who you’ve been with?”

Girls tend to do that, especially when they’re bored. Maybe he is sleeping or in an important meeting. Whatever it may be, everyone needs some space and distance from each other.

That doesn’t mean he doesn’t like you anymore. Maybe he is waiting until the evening to text you back, so you can both see how much you’ve missed each other.

5. You are getting too close

This seems hard to believe at first, but the fact that someone is getting into his life is too frightening for him. He is the type that was always a bit closed up and never really shared his feelings with anyone.

More often than not, guys like this have secrets or childhood dramas and are afraid of someone getting too close to find out.

The women he had so far were involved in his life only on the surface level. He has started to build up some closeness with you and doesn’t know how to handle it.

He got fed up with you. He just wanted an adventure with you, making you unintentionally fall in love with him, but that’s not his problem. He never took you seriously and had only one or a few goals with you.

As soon as he achieved those goals, he wants to move on, and the easiest way is just to ignore you.

Even if he had some feelings for you, he realized that he was just driven by lust and passion and that it needs to stop.

The other case could be that he met someone else and thinks that you are someone he doesn’t need in his life. Believe it or not, breaking up is harder for men than for women, and they are too afraid to face you and the facts.

This way, they are shifting the responsibility on you and possibly trying to make you start the topic first, force a fight, and get what they wanted without feeling guilty about it.

Whatever the case may be, try to talk to your partner first, honestly and without hesitation. Don’t smash your head around thinking about the possible reasons he is ignoring you.

Even if it’s the worst case scenario, do not despair, and don’t take it too harshly on yourself.

Use the space that the breakup and the distance created to work on yourself, develop yourself, and become stronger and smarter.

Everything that happens in your life can be used as experience and the mistakes as reminders and lessons for the future.

See Also:   7 Major RED FLAGS You Should Never Ignore In Your Partner