Aries in a relationship is passionate, involved, present. You’ll know your Aries is getting colder by the way they start to grow distant. When you call them, you might not get an answer.

When you text them, they might text you hours later with a completely indifferent response. They stop making plans with you and including you in their life.

When Taurus is bugged by their relationship and starts to contemplate breaking up, they become super moody.

No matter what you do, nothing works for them. Even things you know they love doesn’t suit them.

They constantly start fights over the smallest of things, and they start to avoid your affectionate touches and hugs.

You know Gemini usually enjoys long conversations. When they’re about to break up with you, though, they lose interest in talking to you.

You can also notice they are cooling off by the way they stop showing affection through physical touch – cuddling, kissing, and being intimate in general.

When Cancer believes their relationship is coming to an end, they stop speaking to you about their day.

You’ll notice that you no longer know what they had for lunch and who they chatted to when they were away.

When you ask them something, they give you short, uninterested answers, and you aren’t able to get them to talk to you about anything serious.

A Leo who’s about to break up with you stops caring about the things they used to call you out on before. No matter how big the mistake you made is, they ignore it.

You’ll know that your Leo is completely ready to break up when they stop arguing, because that means they honestly don’t care at all anymore.

Virgo is the type of person who tries to give you reasons to break up with them. When they’re on the verge of ending things, they’re more critical than ever before.

They constantly talk about your flaws and everything you’re doing wrong. They start fights about anything and everything. That’s the way they express their dissatisfaction.

Libra is the sign who’s all about romantic expressions of love. When Libra stops making these cute little gestures of adoration, you know you’ve lost them.

They stop saying that they love you and doing most of the things they usually do for you. No effort will come from their side.

You will most definitely know if a Scorpio is ready to dump you. Their emotions are so intense and impossible to ignore.

They might be super sad or super mad – either way, they question the relationship and everything that’s been happening aloud. Don’t be surprised to see them cry often.

You’ll notice that your Sagittarius has started to casually and then more intensely compare your relationship with those of other people in their life, be it friends, ex-partners, or basically whoever.

They do this to prove you’re giving them less than others. Also, they are one sign most famous for simply disappearing after a quick, non-emotional explanation.

You don’t have to worry that Capricorn is going to contemplate a breakup long before you know anything about it.

The minute they see things are not working out, they share their fears with you and confess that they don’t believe you two have any future together.

If you’re in a relationship with Aquarius, you surely remember the walls you had to tear down to reach them in the first place.

Once they start thinking about breaking up with you, they put those walls back up. You aren’t able to reach them emotionally. They completely stop opening up to you.

Pisces is a very romantic person who’s all about imagination. They live in their dream world and when they stop seeing you there, you know there’s nothing there between you anymore.

When they stop making plans that include you for far into the future, you can be sure they’re about to break up with you. 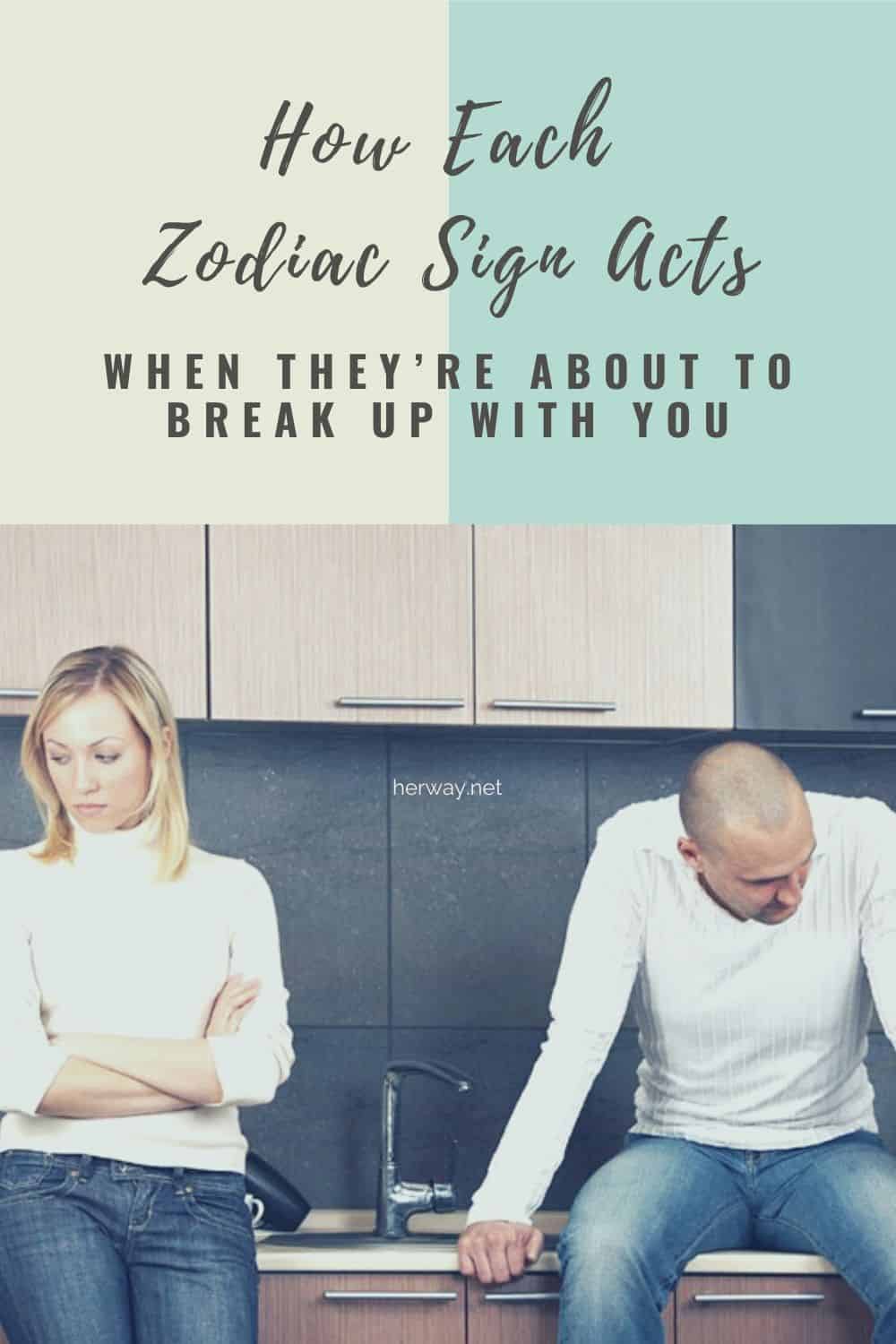 […] He wants a mirror soul who will understand the level of his ambitions because they’re really not that different. If he notices that you lack the enthusiasm to succeed, he will definitely break up with you. […]