Evil people have certain things in common. If you encounter someone with the following traits, steer clear.

Evil finds enjoyment in the misfortune of others to the point that these individuals actively try to create bad circumstances in order to get pleasure from the chaos caused. If there is too much good for the taking, they will set out to destroy it.

They’re dishonest all the time about everything – every little thing. They not only lie about the bigger things in life, such as their whereabouts, who they’re with, how much money they have or what they do for a living, but the little things, too. They may feel the need to lie about how much time they spend on social media, which grocery store they went to, or what kind of movies they enjoy. Weird, seemingly minuscule things that no one normal would bother lying about.

In fact, evil people are pathological liars. They lie about everything constantly, habitually, and sometimes without even realizing it. They can actually begin to believe their own lies because manipulating others has become entirely second nature and an everyday reality in their world.

And, you’ll likely begin to believe them even after catching them lying frequently and without reason. You will begin to rely on them as a knowledgeable source of information and at the same time you start to question yourself and your own perspective of reality. This is called gaslighting. Evil people are so adept at lying and do it so seamlessly it’s impossible to notice when they’re not telling the truth. Those they lie to frequently begin to simply take what they’re saying as fact.

In trying to control everything, evil individuals will also adapt their circumstances to match want they want reality to be. In other words, they will lie and manipulate people and situations to align with their wants and desires. If something doesn’t fit with what they want, they will quickly eliminate it. Or, if they feel it can be persuaded to change, they will swiftly zero in on this and force it into alignment.

Sometimes you’ll simply feel off when you’re around evil people – like they’re emitting an invisible force field that makes you want to run away. Because they are. Your fight or flight response kicks in because you begin to feel yourself questioning what will happen next. Their next move is entirely unpredictable, and this naturally makes you feel uneasy.

Each of us emits a certain energy – positive or negative – and whether we want others to feel it or not, they always will. Evil people emit evil energy. They do not have to say a word for someone to feel uneasy in their presence. They naturally emit a heaviness that suffocates others around them, and often, one can feel this intense energy even in a crowded room and immediately pinpoint its source. It just depends on how open one is to receiving the energy of others and how in tune they are with their own intuitive powers.

Evil is never remorseful or empathetic. These people are entirely incapable of feeling bad for their actions or regretting the things they do to hurt others. They just keep on controlling, lying, manipulating, and twisting reality, regardless of who is affected or how badly they hurt others. This is the only way they know how to live. They do not have the moral compass necessary to dwell on the negativity they create and understand how hurtful they can be.

In the same respect, they are never empathetic of the circumstances of others. If they come across someone who is down and out and in need of help, they will either twist the situation to make themselves the victim and blame this individual for not coming to their rescue, or they will simply keep on walking, not wanting to deal with it at all.

Evil is unempathetic, self-centered, and entirely incapable of genuinely loving or respecting anyone else. You will never find these individuals in helping professions. They crave the money, power, and status necessary to maintain total control at all costs.

They have no time for catering to anyone else and any relationships they form are for their sole benefit, not for the benefit of others. These connections serve to elevate them in some way, and if this changes at any point, they will immediately drop those from their lives.

The worst part about encountering evil is that it not only causes total chaos through deceitful and downright underhanded mechanisms designed to destroy others, but it will never be remorseful for the damage it causes. This is why sociopaths, psychopaths, and those with a narcissistic personality disorder are downright dangerous. They will eliminate all that is good, and afterward, they will smile about it, feeling whole and energized by the negativity they create.

Recognize when you are in the presence of someone evil – and run! 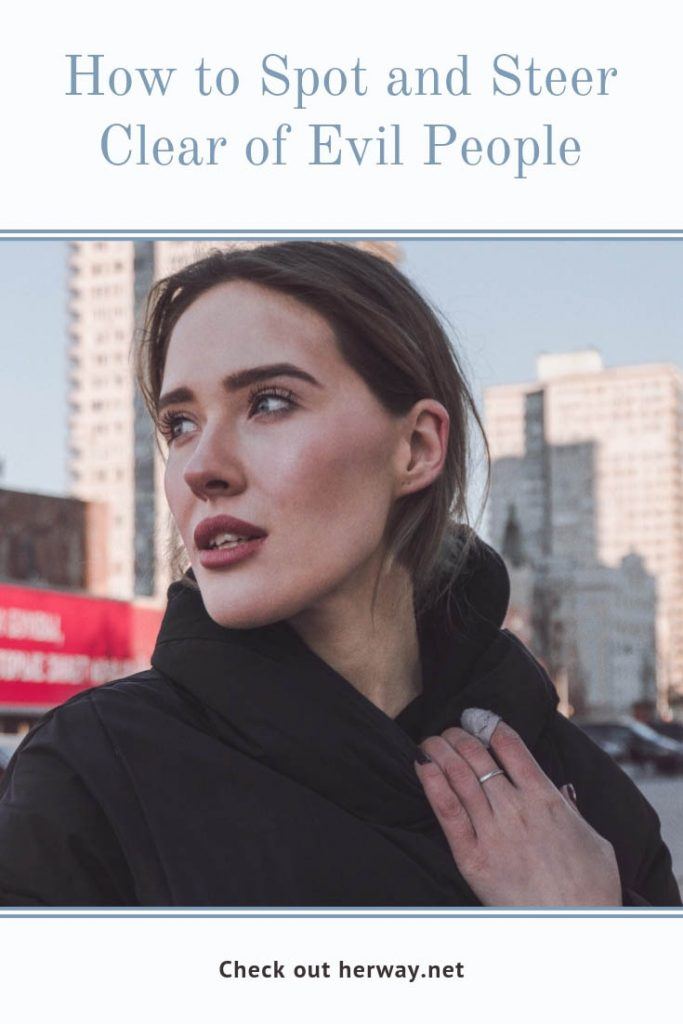