The art of conversation. Seems simple enough, right? And in most cases, it truly is. But when you meet a guy who instantly captures your attention, suddenly, all the words vanish from your mind.

That’s what I’m about to help you with. You’ll never have to wonder how to talk to men again as I’m bringing you the hottest tips on how to get any man you want through a great, fulfilling convo.

If you think the vast majority of men just want to end your first date in the bedroom, you’re wrong. There are mature, adult men out there who actually seek to find a healthy relationship (dare I say a long-term relationship even?) 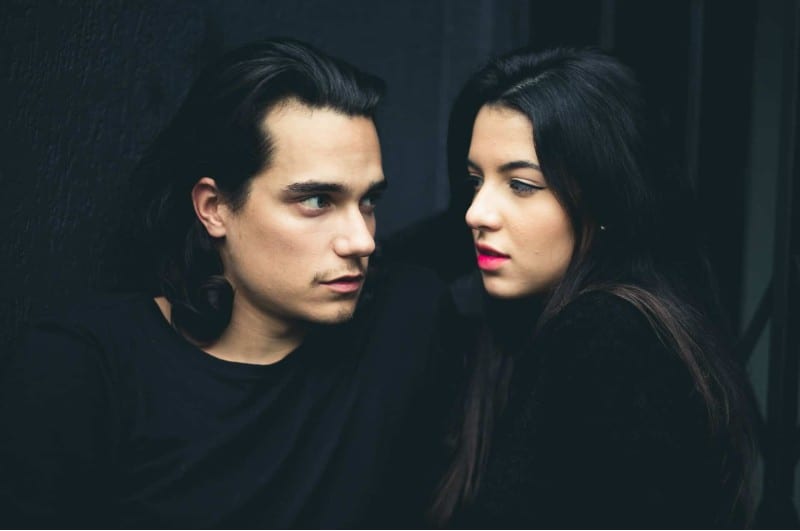 You don’t need a cheesy pick-up line or dating apps to have a successful love life. A good conversation in real-time, along with some eye contact and inviting body language are enough to get you started.

If you’re a single woman (25-year old, 35-year old… it really doesn’t matter) determined to forego online dating for the sake of finding a true connection, I suggest you keep reading.

You’d be surprised how easy it is to attract a high-quality man with the help of some really good dating advice!

See also: From Friends To Lovers: 11 Steps For Transitioning To The Next Level

Surefire Tips On How To Talk To Men

1. Understand that he’s probably just as nervous as you are 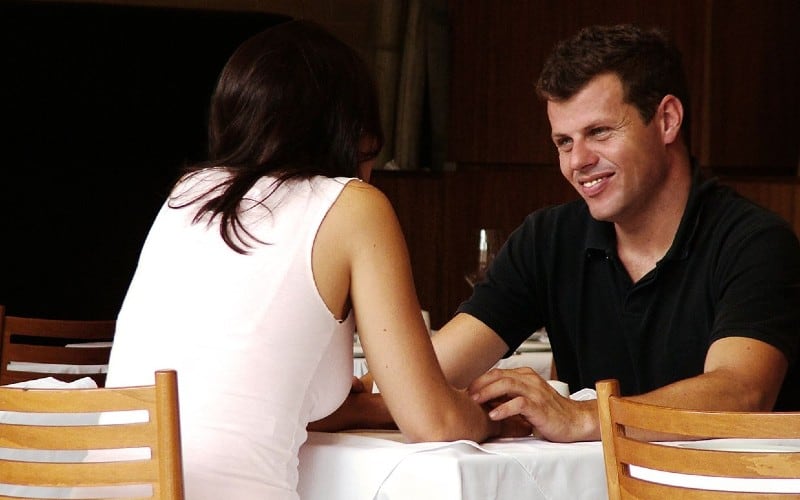 The first thing you need to realize is that men are only human. Just like you, just like me. If you’re nervous and anxious, chances are, so is he. You’re in this together and there’s no need to feel that nervous.

Drop your false beliefs that all men are assholes who just want to get you into bed. That kind of thinking won’t get you far.

Just be yourself. It’s so easy to start a conversation with a random girl in the bathroom when you realize you’re wearing the same shade of lipstick. So why would it be any different with a man you actually like?

You don’t need a kickass conversation starter. You just need to let your guard down and be your usual, fun, quirky self.

2. Know how to talk yourself up 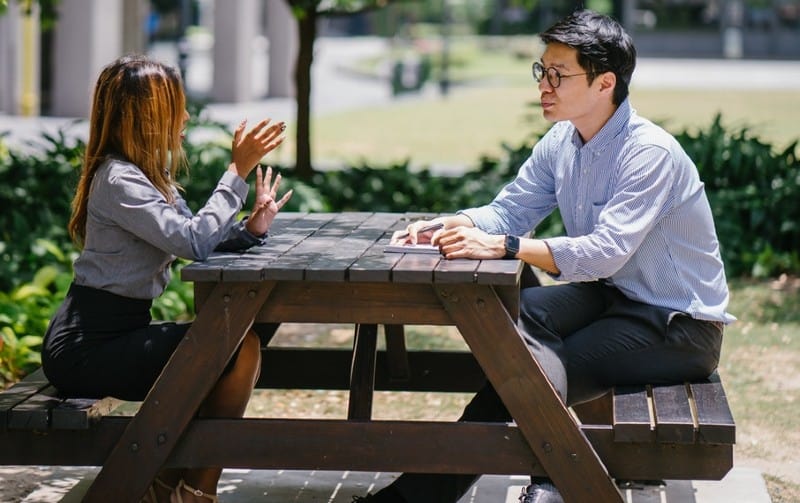 Know why you ROCK! Don’t hide all your badass qualities out of fear that he can’t handle your awesomeness. A real man knows how to handle a real woman. Period.

If you’re proud of who you are and where you are, both professionally and privately, articulate it! Let him see you’re not the kind of girl who lets anyone dim her shine.

This strategy will help you weed out the immature, dated men who are afraid of strong, successful women and don’t know how to talk to them.

By knowing how awesome you are and not being afraid to let it show, you’re allowing yourself to find the highest quality man who’ll know just how to be the kind of man you need.

3. Use ”because” as a way to help the conversation 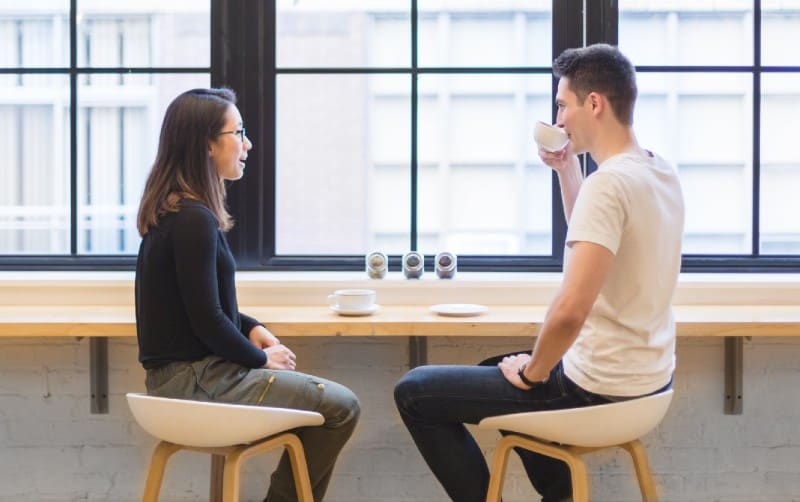 See what you did there? You told him a ton in just one sentence and gave him a lot to go on.

Now, he knows what you do, why you do it, and how happy it makes you. You showed him heart, passion, and lifelong ambition. That’s better than any corny pick-up line you’ll find.

There are a lot of communication styles that many people claim are different in men and women. But honestly, when you find the right person, talking to them somehow becomes like second nature, don’t you think? 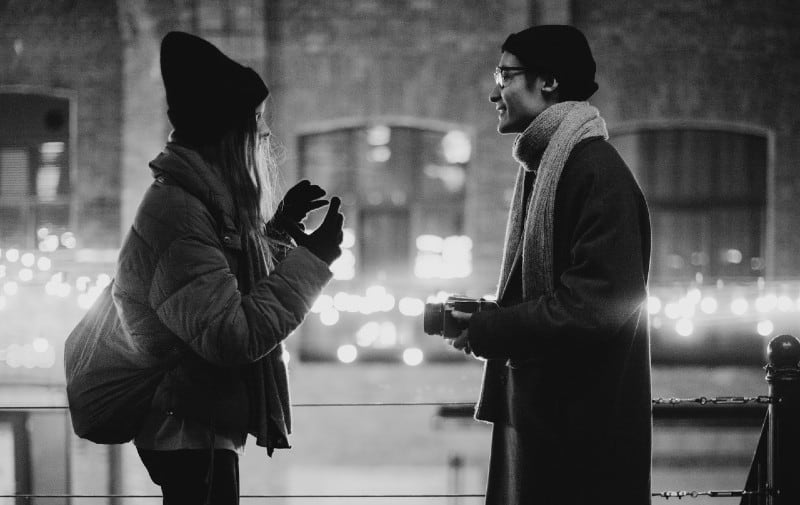 Competition is a bitch. Don’t make him act like someone he’s not if you feel like you’re somehow better than him. I’m sure he’s got enough of that with his bros and at work.

You’re both just trying to make it work in life and remain happy in the process. Be on his wavelength. Don’t make him compete for your attention or feel like he has to top what you just said.

Be nice, be kind, and make him feel good about himself.

Create a comfortable environment where he’ll open up to you without feeling judged. That’s what men appreciate. Kindness and humility go a long way. 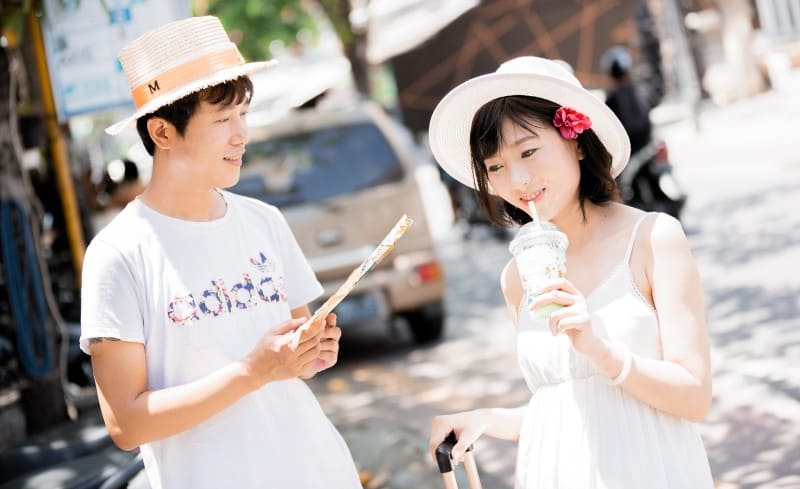 As a single woman who just happens to have extremely bad luck with men, I just want to find someone I can have an actual, adult conversation with. How is that so hard?

But one thing I’ve let affect how I approach the possibility of a first date are those dreaded silences that you just know are going to occur. You know what, though? I don’t really care anymore.

I’ve realized that it slowly destroys your mental health when you keep shielding yourself from relationships, always expecting an imminent break-up due to those little things.

Silences happen, so what? We’re not machines. Eventually, you’re going to run out of things to say! Even when you’re having the best conversation you’ve ever had, it just happens.

You stick it out, you survive, then find a new thing to discuss and life goes on.

6. Pay him a compliment 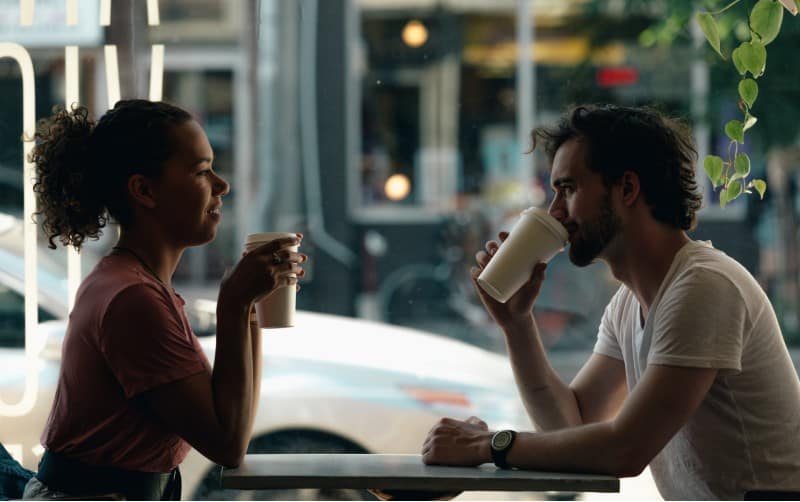 I know, men can be so weird with compliments. They pretend like they don’t care and just brush it off, but in actuality, they dig it. A lot!

You know how you compliment so many women you don’t even know on their hair, lipstick, shoes, or scent? Men love that shit too. So next time you see this guy, be sure to tell him you love his new cologne.

Maybe he’s got a new pair of kicks that are really rad? Maybe his new haircut makes his eyes really pop?

Find something that genuinely makes him seem or feel acknowledged and appreciated, and just casually throw it in. Men LOVE it (even though they’ll never show it).

See also: Confused Man: 8 Reasons For His Uncertainty And How To Deal With It

7. Don’t sugarcoat anything (be authentic and real) 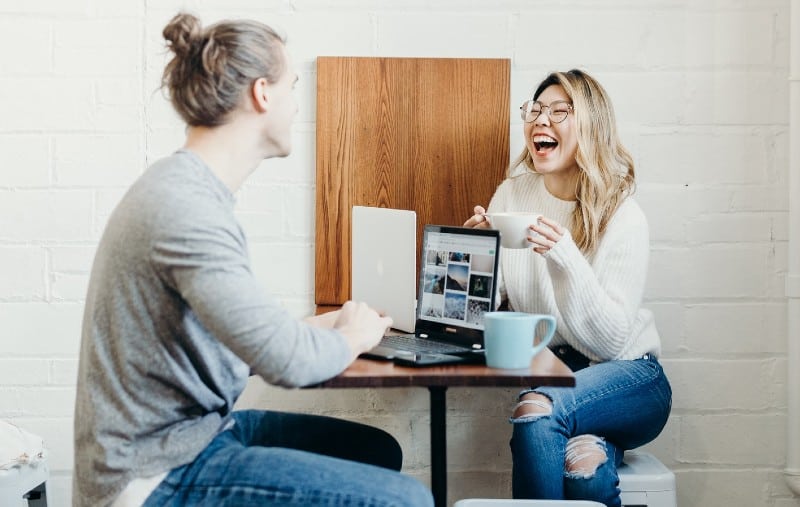 The most important thing is to be as honest and transparent as you can. The fact of the matter is, if you end up dating and start a healthy relationship, he’s going to find it all out anyway.

So why not be upfront with him from the get-go? If you’re a total klutz who just smashed into a pole yesterday while typing on her cell, tell him while laughing at yourself.

If you’re feeling like you might want to start looking for new challenges in your professional career, why not share it with him? It will give him a chance to ask you follow-up questions and make it into a full-blown conversation.

That way, you’ll be able to talk sincerely about things that are relevant to your life and he’ll be an active participant in that conversation. Let him see the real you. That’s what most (mature) men want anyway.

8. Let him tell you about his job on his own terms 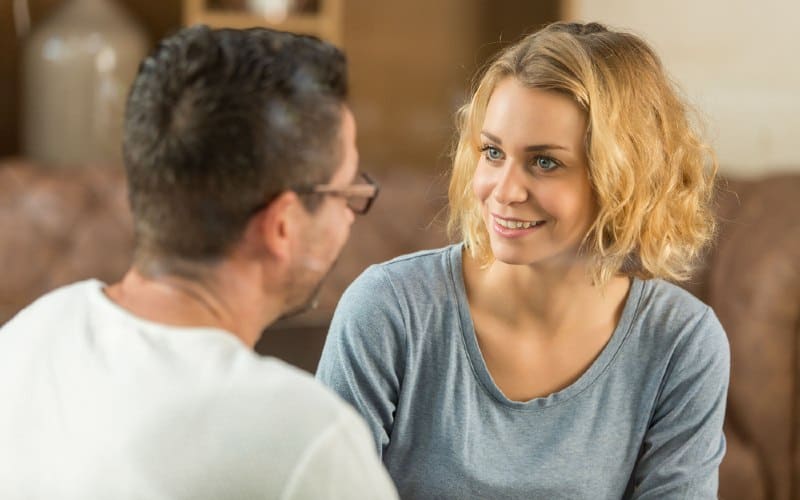 I’m sure you’re eager to find out what he does and every detail behind it. But my suggestion is: Let him tell you on his own.

Let it come up organically, without you forcing him to share. I bet it’ll come up faster than you think; it might just be better if you let him initiate the convo.

Sometimes, it feels a bit interrogative and pushy, which makes him not want to talk about it. He should feel free to talk about whatever he wants, not his work situation right from the start.

He’ll be impressed if you don’t ask him (trust me). It’ll come up at some point and he’ll be happy it happened organically. 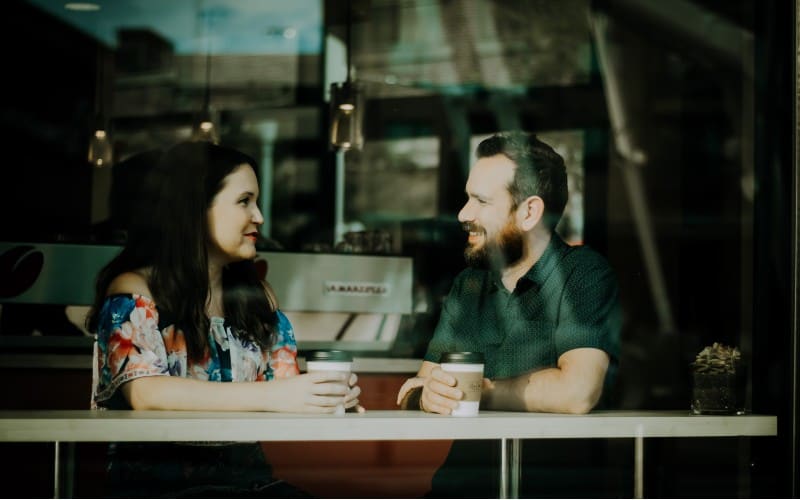 You have probably heard this one a million times and are getting tired of it. But eye contact is just that important.

If you browse around the bar (or wherever you two are), he’ll feel like you’re not paying attention and aren’t interested in anything he has to say. And that’s just rude, wouldn’t you say?

That’s why keeping eye contact matters so much, especially if it’s the first time you two are one-on-one. It lets people know they’re being seen, heard, and acknowledged.

I’m sure you wouldn’t want to go on a date with a guy who keeps checking out other girls’ asses, right? Well, the same goes for him. Pay attention to him and no texting while talking.

See also: How To Get A Guy To Ask You out Using These 7 Sneaky Methods 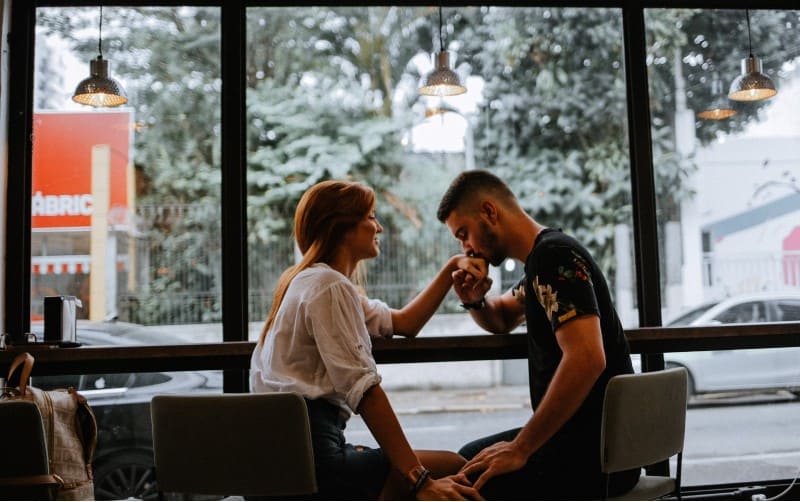 I know this is such a cliche thing to say, but living in the moment is really what life is all about. You never really know the importance of a moment until it’s gone. That’s why you should never take any of them for granted.

If you’re enjoying a beautiful date with a gorgeous guy and you’re really clicking, just be present!

No work, no errands, no worrying about things that can wait. Don’t ruin a perfect moment with unnecessary things that don’t matter right that second.

You only get one chance at a good first impression – don’t blow it. If you want to have a fulfilling love life, you need to dedicate yourself to really being there. Otherwise, it’s just a waste of time.

11. Leave something to the imagination 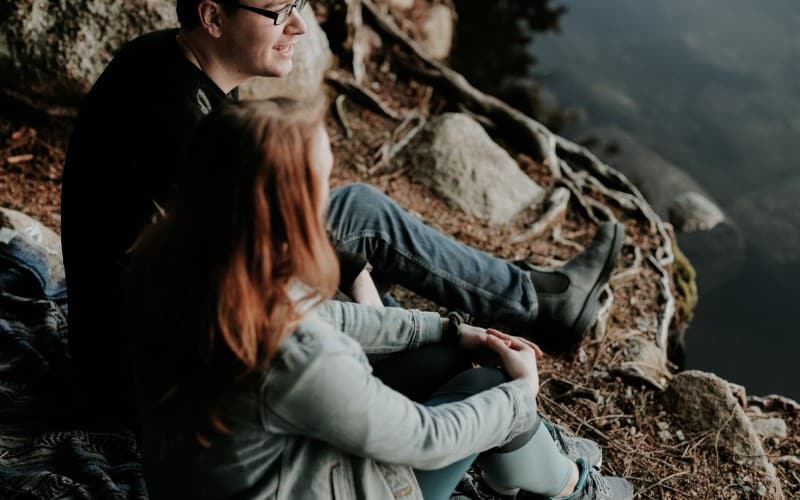 While honest communication is vital for a long-term relationship, so is a little mystery.

Don’t put it all on the table at once. Don’t share every interesting thing about yourself in one go. Leave something for later. Make him crave your attention.

That way, you’re likely to hook him and make him keep coming back to you. He’ll feel an air of mystery and just have to get to the bottom of it.

But the thing is, it’s not going to be so easy.

And that right there gives you an edge. If you keep making him want more, he’ll keep coming back to you. That way, you get a chance to develop a real connection and figure out where you want it to go.

12. Ask him questions and opinions 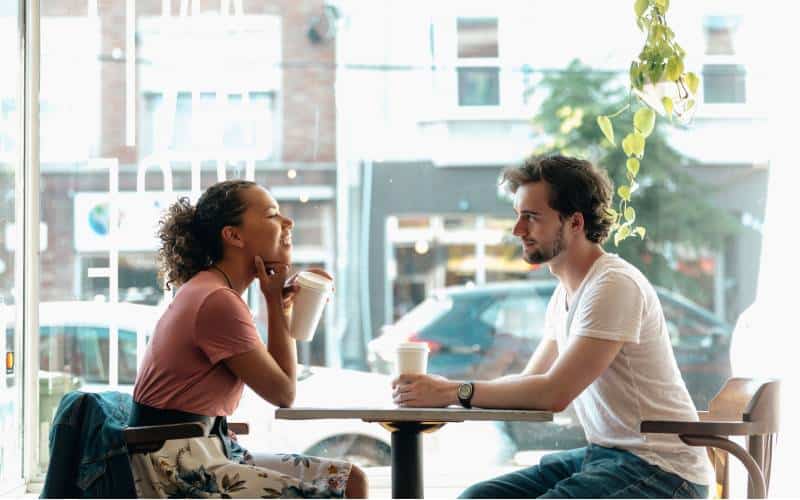 Basically, let him talk! Men love to give their opinions. They also love being asked things as it makes it easier for them to talk without feeling like they’re being pushy.

If he lives in a particular part of town, ask him what made him move there, as you’re thinking of getting a place in that neighborhood.

If he plays the guitar, ask him if he would mind playing something for you someday (I bet he wouldn’t!) and that way, you’re getting him to do something he really loves and ensuring a second date!

See? It’s really that simple. Just be yourself, let him talk to you about what he loves and use any chance you get to double the odds of seeing him again. If he’s a solid dude, it won’t be too hard.

See also: Does My Ex Miss Me After The Break-Up? 15 Signs You’re On His Mind 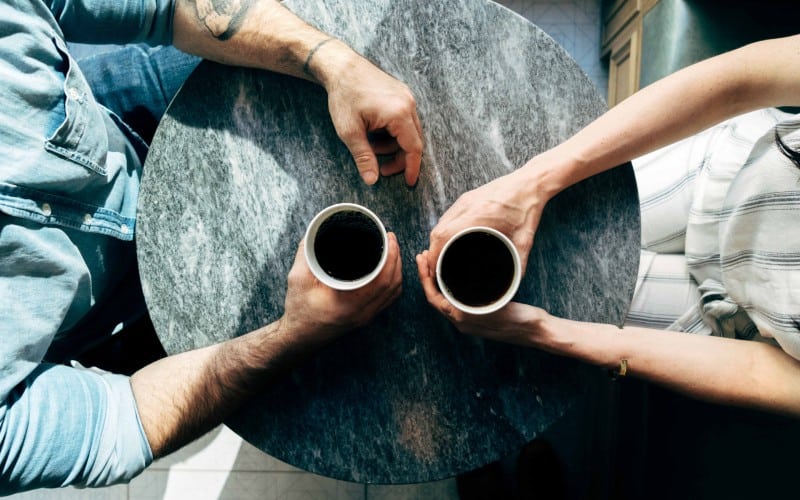 Men aren’t aliens. They’re just regular human beings who crave a real connection and a girl who isn’t afraid to be herself.

Knowing how to talk to men isn’t that hard. If he’s really someone you see any type of future with, these tips and tricks should help you get to a good place and develop organically.

If you have to force it, it’s not worth the bother. Good communication is the cornerstone of any relationship and you should never settle for someone you can’t have that with.

Use the tips I suggested and don’t let irrational fears overwhelm you. If he’s a good guy, he’ll meet you halfway and you’ll be having the most fulfilling conversations in no time.

Show him the real you and see if he can handle it. A real man won’t have a problem keeping up with a real woman.

See also: How Long Does A Crush Last? And 10 Ways To Successfully Get Over It 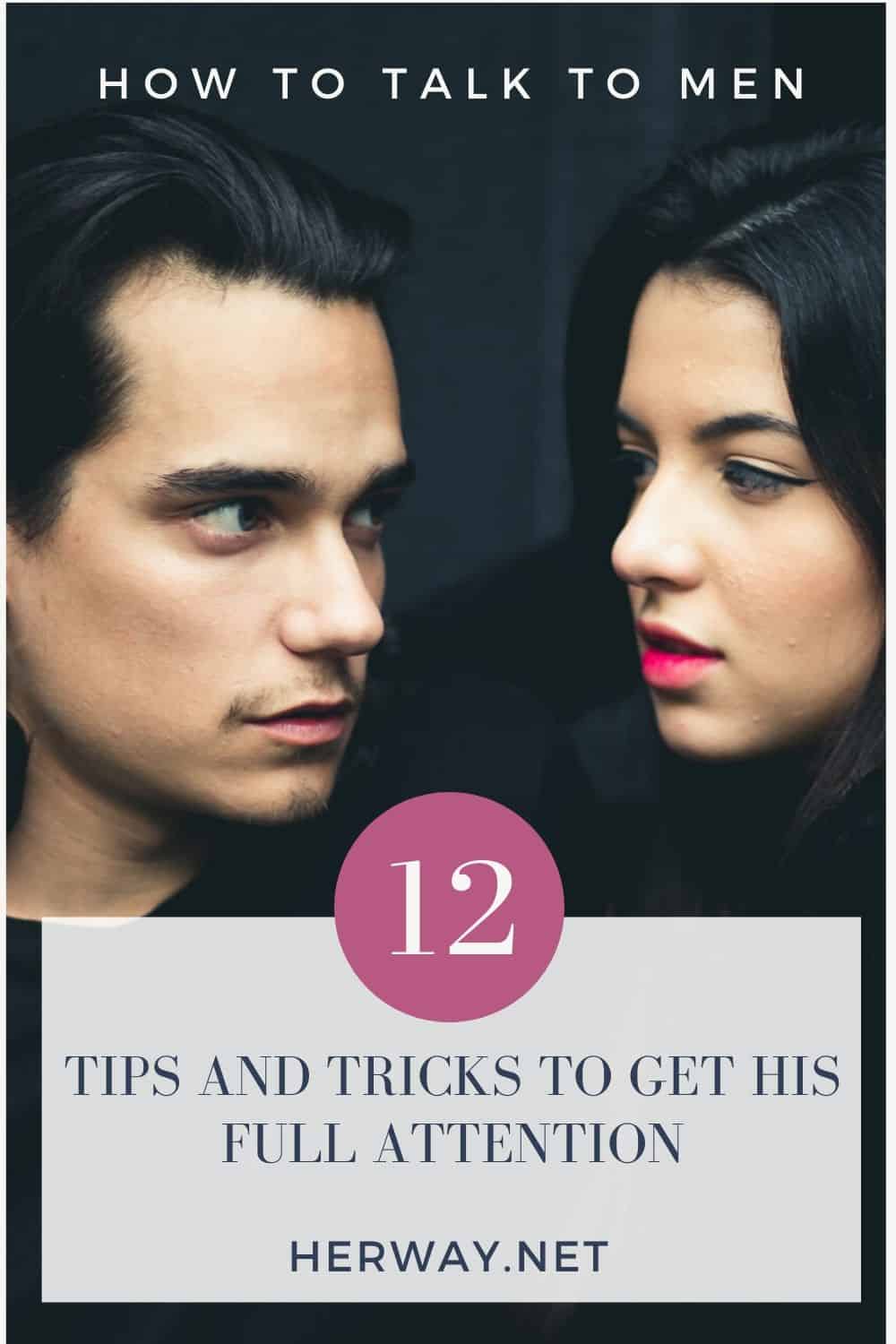