An insecure man is the worst thing that can happen to an Arian woman. You have days when your self-esteem is low and when everything seems pointless.

You need someone to encourage you to regain your self-esteem every time it starts to fall. Someone who sees what you are made of and doesn’t allow toxic thoughts to get the best of you.

Basically, you have your own stuff to deal with and being with someone who is insecure will only make your problems bigger and more difficult to solve.

A Taurus woman loves life and has the full intention to enjoy it to the fullest. The only thing that can ruin your intent is if you are mismatched with someone who is grumpy and pessimistic.

Even though grumpy can seem cute at first, especially if it comes in the form of tall, dark and handsome, it will be a drag in the long run.

The bad days will be worse because he will complain constantly and the good days will be ruined by his whining and him constantly complaining about how nothing is ever good and how the universe has conspired to ruin his life.

Do yourself a favor and run as far away as you can when you find yourself with someone like that.

Although your dual personality is enough to keep you happy and occupied with yourself, you love to socialize, especially with the person you are romantically involved with.

So the man you should avoid is the one who never has time for you. While he is busy with life, work and all sorts of things, you get crumbs of his affection and attention.

That just doesn’t cut it. If you get stuck with a man like this, you will start to feel lonely in no time. You didn’t enter a relationship to spend all your time alone, now did you? You need a man who makes time for you even when he has none.

An emotionally unavailable man is a big NO for a Cancerian woman. You are sensitive and emotional and the last thing you need is a man who doesn’t know where his head is at.

A man like that will string you along, he won’t care how his actions affect you and he will always have one foot out of the door.

You need a man who can provide stability and safety, somebody mature enough to know what he wants and who doesn’t run away from commitment. Anything other than that will break that big and soft heart of yours.

A Leo woman is charismatic, strong, independent and full of confidence, that’s why the last thing you need is someone who will control your life.

A jealous and possessive partner isn’t the right choice for you. Doubts, tracking your every move and non-stop calls and texts are not things you deal with well. If you give your trust to someone, you expect the same in return.

You don’t need someone who will try to tame you or cage you. You need a man who will support you and be by your side and love you in a way that makes you feel free.

As a Virgo, you are at the top of your game. You like order, you plan ahead and you want to be with someone you can count on. That’s why an irresponsible man is the worst possible match for you.

Even though at first it won’t seem so major, as time goes by he will drive you insane. He will say one thing and do the opposite. He will always be late or cancel at the last minute. He will do all sorts of things you find incredibly stupid.

Be honest with yourself, you don’t need that, no matter how cute he is. You need someone who will be consistent and above all honest, someone who will take you and your relationship seriously and not someone who messes you around.

Empathy and politeness are the two most dominant virtues every Libran woman possesses. That’s why a rude and insensitive man is someone you ultimately won’t be able to stand.

A man who matches this profile won’t be just rude to you, he will do his best to belittle your friends, his friends, and even the waiter when you go out to eat.

He will make you feel uncomfortable and embarrassed. Sooner rather than later, you will dump him because even though you are understanding, there are no excuses for being an asshole.

Even though they are mysterious themselves, they don’t like mysteriousness when it comes to relationships. Most Scorpio women are known for their tendency to be jealous and suspicious. If you are one of them, the type of man you should definitely avoid is someone with a lot of female friends.

Even though this is something you should try and solve about yourself and you should work on any trust issues you may have, it’s better to avoid these situations for the time being.

Men who like being in a rut and are comfortable with boredom are not for you either. You like to make last-minute travel plans or go out for a cocktail in the middle of a work week.

All in all, you don’t like boredom and you don’t like to feel stuck in a relationship. That’s why you will be the happiest once you are with your soulmate, someone who will match you perfectly by being both similar to and different from you.

Capricorns are stubborn by nature. So a man who shares a similar personality trait is definitely not made for you. When stubborn and stubborn confront one another, that can only result in chaos and constant fights.

Also, a lazy man is a poor choice for a hardworking Capricorn woman. You won’t feel good in a relationship with some deadbeat who doesn’t provide for himself.

You won’t appreciate a man who doesn’t do half of the things you do around the house. For you, it’s all about equality and reciprocity and you shouldn’t settle for any less.

Dominant men are not your cup of tea. You live your life by your own rules and you don’t need someone who will constantly be on your case and tell you what to do.

You need someone who is more laid-back, someone who doesn’t feel threatened when you express your opinion or when you do something on a whim.

Bending to fit someone else’s needs and expectations is not something you enjoy. Being spontaneous is something you do best so why mess with perfection.

Liars are the worst kind of men for a Pisces woman. Well, for any woman actually, but a Pisces woman can’t function in a relationship where trust doesn’t have solid foundations. They want and need to feel safe and without trust that’s impossible.

That’s why you need a man who stays true to his words. Someone who doesn’t hide his phone every time it lights up with a text and whose eyes don’t wander off every time some pretty woman crosses his path. 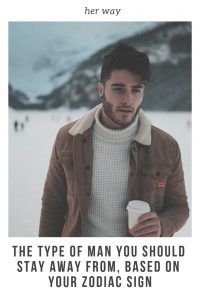