One moment they are all affectionate, showering you with sweet gestures, and then another they start doing their little annoying things like leaving their socks under the bed for eternity, thus making you test your tolerance.

But, who can blame them? It seems it’s in their nature to exhibit different traits that make you love them and at the same time hate yourself for loving them.

However, one thing’s for sure—they will never stop doing those little annoying things, and we’ll never stop bitching about them.

The only thing that’s left is to remind ourselves of their silly nature and have a good laugh about it!

Contents show
1 1. Farts and burps on all fronts
2 2. Wears his shoes while laying on the couch
3 3. Leaves socks under the bed or on the floor for eternity
4 4. Leaves dishes
5 5. Forgets plans if they are made a few nights before
6 6. Uses your towel
7 7. Remains silent when you’re pissed off
8 8. Picks up the wrong thing from the store
9 9. Doesn’t notice the mess around him
10 10. Pretends he’s listening to you

1. Farts and burps on all fronts

A convenient time for farting and burping doesn’t exist.

Worst of all is that it is their most amusing fun game that they don’t have to download to play.

No matter how hard you try to convince them that there’s nothing entertaining about it, they keep being persistent.

Sometimes they bring this shit to another level by spreading their silliness when being in public, with you forcing yourself to pretend that you don’t know them. (Unfortunately, you know them pretty well).

2. Wears his shoes while laying on the couch

He spends the whole day in his sneakers out there, and then just casually enters the premises and lies on the couch while still wearing the same goddamn sneakers.

I mean, is it so hard to take them off like the rest of humanity? I guess this one will remain an eternal enigma.

3. Leaves socks under the bed or on the floor for eternity

Believe it or not, they will not magically wash themselves if you leave them rotting on the floor.

Take off your socks, put them in the hamper, and wear new ones. It’s really as simple as that.

You seriously dare to complain that you don’t have any of your freaking cereal bowls when you know you were voluntarily just piling up dishes in the sink for a whole week?

To be more exact, you were sorting them like playing freaking Tetris (and to be honest sometimes it amazes me).

5. Forgets plans if they are made a few nights before

If the plans are not announced ten days before the event and repeated approximately ten time every single day, he will forget them.

Whether deliberate or not, it just isn’t fucking fair.

If I can remember every goddamn detail about your game, I’m sure as hell positive that you can try to remember one single thing you’re told to.

Seriously? Why is it so hard to pay attention and try to memorize which towel is yours?

Why would you use my towel, not tell me about it, and reassure me that it’s okay if I wipe my face with the same towel you wiped your ass?

I certainly don’t want my face to smell like your ass because it’s not hygienic (if you’re even familiar with the word).

7. Remains silent when you’re pissed off

If I’m pissed off and you’re being silent, you will make it even worse!

There’s no need to pull away and leave me be because with such behavior, you’ll make me even more pissed off. It’s as simple as that.

Say anything, but do not stay silent!

8. Picks up the wrong thing from the store

You ask him to bring soda. He brings milk instead. You’re having a bad period and you need your pads or tampons.

He brings you daily panty liners instead. Somehow, magically, he always manages to pick up the wrong thing from the store (without even trying).

And if you give him the whole list, there will always be at least one thing he read incorrectly.

9. Doesn’t notice the mess around him

Even if he was sitting in a pile of stinky laundry or was encircled with chocolate wrappers, he simply wouldn’t notice the mess around him.

And when you ask him when he’s about to clean the mess, he asks you: “What mess?”

And then you start questioning your own sanity whether something’s wrong with your glasses (if you wear them) or if he really doesn’t give a shit about it.

10. Pretends he’s listening to you

Why do guys have this tendency to play a video game or do something else and nod at every single word you say to them, and when you ask them about it, they have no idea what you’re talking about? 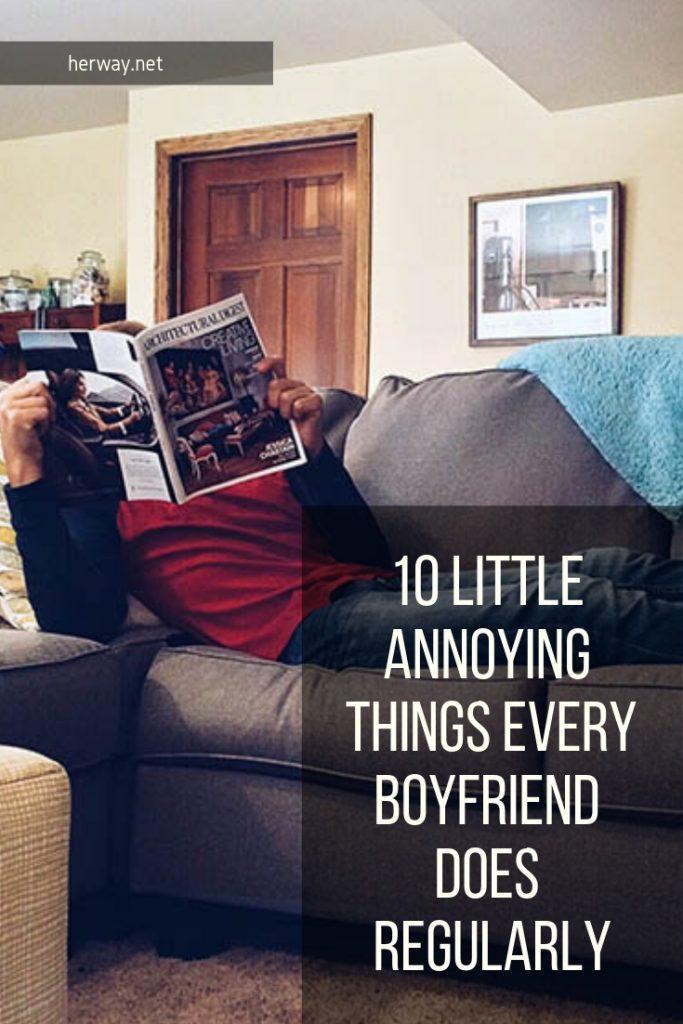 14 Things To Do When You Are Unhappy In Your Relationship

[…] You are so irritated with every single thing that happens and you are anxious that you will lose him. […]

[…] is normal that couples annoy each other from time to time, but if you feel that you get annoyed by your partner every day, it is definitely a bad […]

[…] You’ll give him dozens of second chances, and he won’t even think about changing his approach to your relationship because you’ve clearly shown him you’re going to tolerate every shitty thing he does. […]