I don’t know about you guys but this dating world becomes more and more confusing by the second.

When it comes to dating, after a while all of us would like to know where we stand, and whether the other person feels like we do or if they are still testing the waters.

The easiest way to solve the dilemma would be by simply asking them directly. But after you cross a certain age, it seems that this becomes more difficult.

I feel awkward now going up to the person I am dating and asking if we are exclusive or if I am his girlfriend. It sounds kinda funny and childish when you have to utter those plain questions.

Luckily, there are some telltale signs that can give you an answer without going through the awkwardness or he can at least give you the right idea of where you stand until you get the courage to ask straight-up.

These are the telltale signs that you are in an exclusive relationship:

Contents show
1 You both uttered the words, “I love you,” and backed them up
2 You met each other’s friends and family
3 You have personal stuff at each other’s place
4 You include each other in future plans
5 You tell one another if exes reappear
6 Online dating profiles don’t exist anymore
7 You have photos together on social media
8 You both pay attention
9 You have unique nicknames for each other
10 Not every sleepover ends in sex

You both uttered the words, “I love you,” and backed them up

But when you are with somebody who is true to their word, they will do more than say they love you—they will show you.

They will back their words up with actions. They will be there for you no matter what, they will text and call, and they will make sure you know you are as important to them as they are to you.

You met each other’s friends and family

You don’t introduce your friends and family to someone random and unimportant—you introduce them to somebody who means something and that goes both ways.

So if you are spending some time with his friends and family it means that he is making a place for you in his life and that he wants to be a part of your life too.

You have personal stuff at each other’s place

You have a toothbrush, cosmetics, PJ’s or even your own drawer at each other’s place, nothing too much that would indicate you moved in completely but just enough to know that you belong there.

You spared some space in your home for each other and even when you are not around you have these little reminders of one another that make your day just by looking at them. This is definitely a sign of something that’s about to get more serious.

You include each other in future plans

You evolved from day-to-day plans to those that are more long-term, like planning a summer vacation together, attending a family reunion next year or buying concert tickets months in advance, which all indicate that you are in this for the long haul.

You make plans that are for you two and you prefer to spend time together no matter what you are doing.

You tell one another if exes reappear

If the person you are dating tells you that their ex contacted them in any way, that is a very good sign of exclusivity.

They don’t want their past interfering with their present and they would much rather be open and honest about everything rather than risking the relationship they have with you.

An even better sign is if they mention you to their ex but if they ignore their text completely, it means that they are only concentrated on you.

If you both deleted dating apps from your phones, it means you stopped searching because you have found what you were looking for.

There is no need to check other people’s profiles or keep in touch with them as you are both off the market.

You have photos together on social media

The easiest way to tell the world that your heart is taken is simply by publishing a photo on social media.

Some people find it annoying to change their relationship status on social media but photos of the two of you are proof enough that you are in an exclusive relationship.

The saying ‘a picture is worth a thousand words’ is not for nothing.

You both pay attention

By now you already got to know each other in a way that makes you predict some of the moves your partner makes. Luckily it’s not boring but rather cute.

You know each other’s habits, likes and dislikes because you pay attention and spend a lot of time together.

You know how they will behave when somebody misspells their name. You know what they will order at a restaurant.

You know they will take a nap after work and text you right after they open their eyes. And they also know what you would do or say in certain situations.

You have unique nicknames for each other

Your relationship is so tight that you don’t have just cute nicknames or some heart-melting contact names for each other, you also have some that only the two of you can understand, things you can connect to at some moment or some story. It can also be something that reflects what you love the most about each other.

Not every sleepover ends in sex

While it’s normal that at the beginning of a relationship, sex dominates, later on, you will naturally fall into a place where you will have some days where you would much rather cuddle and watch TV than get busy between the sheets.

Exclusivity is also about spending time together and enjoying it no matter whether sex is in or out of the picture at that moment. 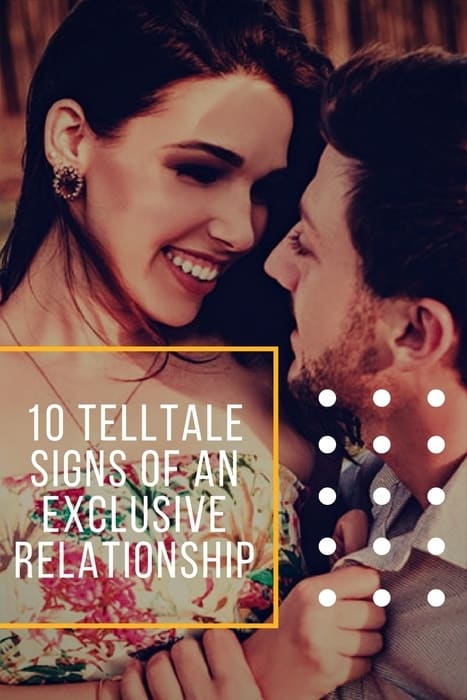