Cutting off communication after you break up with someone is important, otherwise you would never get over them.

But sometimes that is not an option. Sometimes, you are forced to spend time with him or see him every now and then.

This sucks but you have to deal with it and do the best thing you can. You have to keep it together and act according to the situation you’re in.

You mustn’t let your emotions rule you, you should go with your reason and that is not the easiest thing to do.

When you run into your ex, the feeling of rejection kicks in and you automatically feel hurt and you get flashbacks of how it all went down.

This doesn’t only hurt emotionally but it hurts physically, too.

Luckily, there are some tips that can help you control yourself and appear to be cool and pretty much indifferent:

Although you’re falling apart on the inside, never let the man who broke your heart see that. Never show anyone that you’re hurting. If you run into him, looking however you’re looking, act surprised and somehow happy that you have run into him.

Ask him how he’s doing and where he’s been but keep the conversation short. If you prolong it, you’re risking your self-defense mask falling and revealing how you’re really feeling. Be the better person by acting polite and when you’re finished, move along.

You can cry at home for as long as you like, to get it out of your system.

You’ve probably been thinking about all the nasty comebacks to say to him if he tries to apologize to you. That may satisfy you for a minute but you’re not going to achieve anything.

You’re still going to feel like shit because you’ve been hurt. That’s why what you should do is take the high road and accept his apology.

Nothing else will change how you feel, especially if you’ve been cheated on.

If you know that you’re going to run into each other, the best thing to do and the most mature and responsible thing to do is set up a meeting with him.

Tell him everything you want to say and try to talk things through to avoid the stress of encountering him with a group of friends or co-workers.

This way, you’re going to avoid the uncomfortable situation you and the people around you would be in.

If there are still too many feelings involved, if your eyes still tear up when you think of him, it means that you’re not ready to confront him.

It’s easy to ignore him if you’re not forced to see him, even if he contacts you. Just don’t answer the texts and calls and you’ll be fine.

But if you’re in a situation where you have to be close to him, the best thing to do is ignore him. Rather pretend that he is not there than saying something you’ll regret once you stop being emotional. 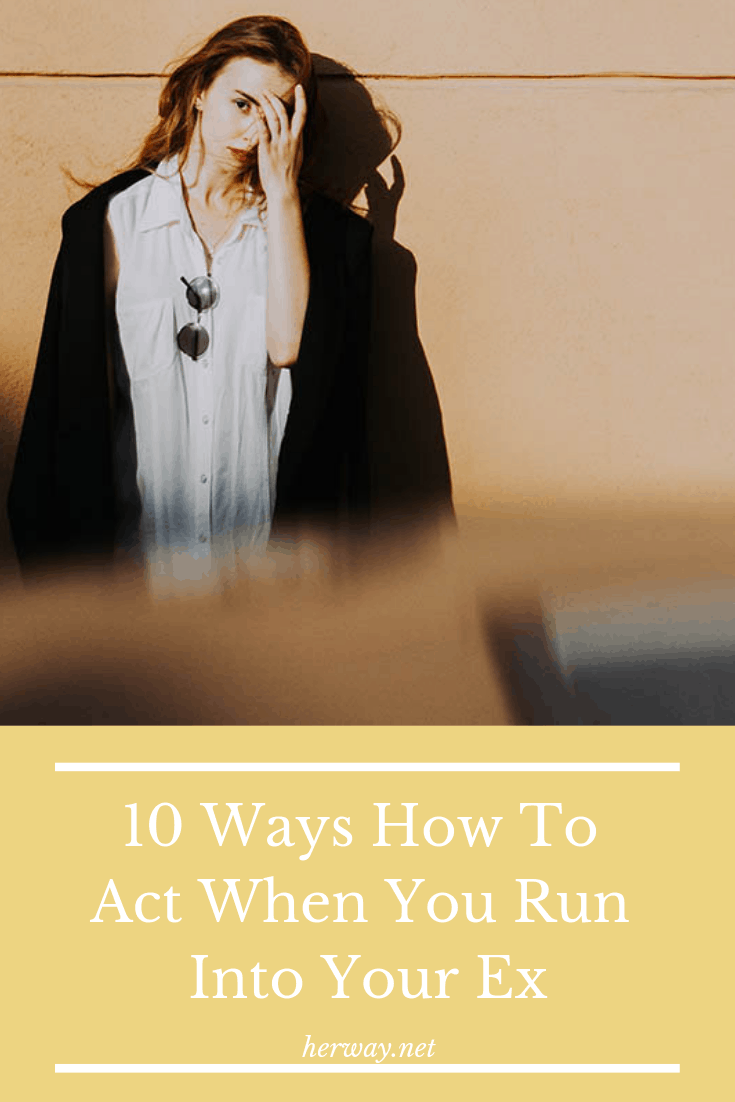 That is a bad idea. If you see each other on a night out, don’t get beer muscles and say something you’ll regret the next morning.

In that situation, you can only make things worse. So, listen to your friends who will probably try to talk you out of it and make you look the other way.

Also, don’t try to make him jealous and end up with a random guy just to ‘hurt’ him. The only thing you’re going to hurt is your pride.

If you really want to talk to him, I suggest that you do it sober.

If you saw him, he saw you. That’s a fact. So don’t risk looking like a complete idiot and run away from him.

Instead, use the advice from before and greet him and keep it short, just enough not to fall apart.

If you try too hard to talk yourself up, chances are he is not going to buy it. Sure, success is the best revenge you can have and the best thing to do is rub it in his face.

But if you shout it from the rooftops, you’re taking it a bit too far. Being humble about your accomplishments is the best thing you can do. The fact you’re doing so well will find its way to him and he will find out. Don’t worry about that.

8. Don’t talk about the past

If you bump into each other or if you plan a meeting, don’t talk about the past. It will only agitate the both of you and it will probably end up in a fight.

You’re with him to make peace and to have some kind of closure. Do it the honorable way.

9. Prepare for the worst thing that can happen

Prepare yourself for seeing him anytime and anywhere. You won’t probably look your best because that’s how it usually works but don’t let that get to you or affect how you’re feeling or what you’re going to say.

Being unprepared can affect you and you can say something you didn’t want to. So prepare yourself for the worst case scenario and have a special speech for those situations. As long as you stick to the script, you’re going to be fine.

10. Don’t make him the center of your universe

You’ve broken up and frankly, he doesn’t deserve even one bit of attention you’re giving him. The best thing to do is completely let go of him and move on with your life but that is easier said than done.

You’re pressuring yourself and then when you actually see him, you’ll be a mess. You’re going to bump into him sooner or later and when you do, be prepared.