Skip to Content
Contents show
1 1. He keeps his emotions hidden
2 2. He is either too available or not available at all
3 3. He thinks he can come and go from your life as he pleases
4 4. He does things on a whim
5 5. His mood changes more often than the weather
6 6. He loves to provoke you
7 7. He acts like he is doing you a favor by being with you
8 8. He brags about his achievements
9 9. He has strained relationships with other people
10 10. He is unable to take responsibility for his actions
11 11. He is stuck when he hits a bump on the road
12 12. He usually can’t control his anger

1. He keeps his emotions hidden

You constantly have to read the signs and decipher his mixed signals to see where his head is at because he will never say it aloud.

His behavior is making a gap between you. You don’t know how to cross it and make you closer. He started acting like this because he is afraid of rejection, and it’s his way of dealing with it.

2. He is either too available or not available at all

You don’t know what his deal is because he has phases when he is always by your side and periods where you barely ever see him and you have to bend over backward to make him find time for you.

He can’t find a middle ground in anything he does. His emotions are not balanced, and he goes from one extreme into the other.

3. He thinks he can come and go from your life as he pleases

He never knows what he feels for you. One minute he is there and completely intoxicated by you and the next he is gone.

Of course, after a while he’ll come back because he’ll realize he made a mistake, and he will keep repeating this scenario as long as you allow it because he can’t handle his feelings.

4. He does things on a whim

He is impulsive, and you never know what he is going to do next. The worst of all is that he doesn’t know it either. He does things without taking time to think about them.

He says he will do one thing and does the complete opposite. He says he’ll be somewhere and never shows up. He is totally unreliable, and his actions are sometimes borderline dangerous.

He doesn’t think about how his behavior will affect you. He just makes a momentary decision regardless of everything else.

5. His mood changes more often than the weather

We all get moody at times, and that’s ok. But his mood can turn from extremely happy to highly depressed in the matter of seconds…or in the worst cases from loving to aggressive.

At one point you are cuddled up on the couch, and he is being super sweet, and before you know it, he is belittling you and calling you names.

His emotions are not just off balance. He is emotionally unstable, and he needs professional help, not a girlfriend.

6. He loves to provoke you

You sometimes feel like he is deliberately starting fights just to provoke a reaction. He loves to get into debates, and he won’t stop until you’ve admitted your defeat, apologized for something you probably haven’t done and proclaimed him the winner.

His behavior is highly toxic, and he is not someone you need to be around. The best thing you can do is get away from him as soon as possible.

7. He acts like he is doing you a favor by being with you

He acts like he is the best thing that happened to you. He even says that you would be lost without him. He is praying on your emotional stability, and he is doing his best to destroy it.

Not only is this a red flag sign of someone who is emotionally unbalanced but also of narcissistic and sociopathic behavior, so be very careful.

8. He brags about his achievements

He has this inexplicable desire to talk on and on about all the things that he is proud of. Every little win he has he will share on all his social media accounts.

And while there is nothing wrong with being proud of yourself, you will notice when a man is taking it to extremes, and he is seeking admiration and acceptance from the rest of the world.

9. He has strained relationships with other people

He always has problems with other people. He will say it’s not his fault and that nobody gets him. But ask yourself: ”Is it possible that so many of his friends and coworkers have done him wrong while he portraits himself as a saint?”

People who are emotionally unbalanced have poor social skills, and they often find themselves conflicted with people around them.

10. He is unable to take responsibility for his actions

One more thing that narcissists, sociopaths and emotionally unbalanced men have in common is that they have mastered the art of playing the victim.

He will much rather convince you that you’ve done something wrong than admit that he is the one to blame.

Stay away from a man like this. Not being able to take responsibility for his actions is just an indicator of much deeper issues.

11. He is stuck when he hits a bump on the road

Whenever a problem or an issue arises, he is constantly thinking and talking about it. He can’t just solve it or accept it happened and move on.

Whenever you and him have a problem, he is able to fight for days at a time. Even when he says ‘it’s all water under the bridge’, he will bring up the subject a few more time.

Also, he loves to bring up issues from the past and rub them in your face. If he is doing that, you will soon enough realize that he is your biggest problem.

12. He usually can’t control his anger

By now it’s pretty clear that the emotionally unbalanced man gets into arguments a lot. He is not able to control his emotions. He also has a habit of being extremely happy or sad, but his anger is the worst.

He has a short temper, so he shouts and screams when he is upset. He also has a tendency to be violent. That doesn’t mean he is necessarily physically violent towards someone he is angry with but he might punch the wall, break dishes and furniture or slam the door.

The emotionally unbalanced man is someone you should stay as far away from as possible. He can make your life a living hell. 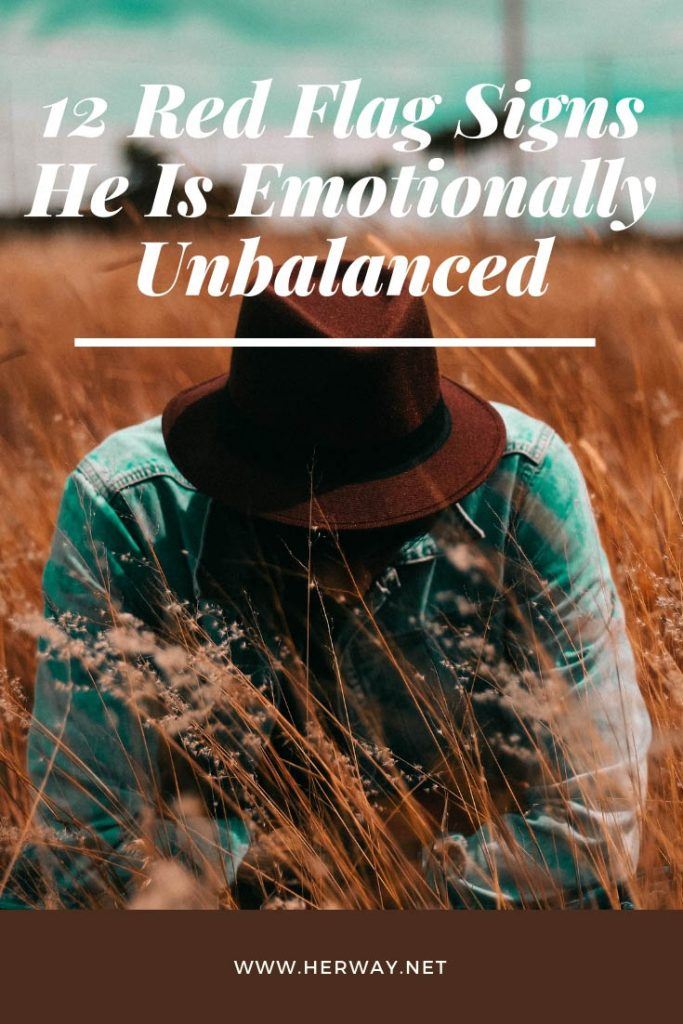