People are always quick to tell you to steer clear of those with emotional issues and self-doubts. But the thing is, in each and every one of us there are hidden insecurities that some of us are just better at hiding than others.

We all wish to be taller, thinner, smarter, more outgoing or with a perkier ass. That doesn’t make us flawed; it only means we’re human.

But in some people, these insecurities are much deeper and greater, and they play a very dangerous role in deteriorating their relationships.

Don’t let your man get away with these 5 insecurities that he is taking out on you and that are slowly but surely ruining your relationship and killing your spirit and self-esteem.

Contents show
1 1. He shames you
2 2. He doesn’t seem to have friends
3 3. He is often threatening to break it off with you
4 4. He stalks your social media and is vocal about his opinions
5 5. He can’t take criticism

Now, a normal amount of teasing is good for a relationship and is somewhat healthy. Couples who tease each other are proven to last longer.

BUT, when he doesn’t stop at anything and just shoots his shot without thinking how humiliating and low it is for you, that’s where you have a problem.

If he makes fun of any aspect of your physical appearance, the way you do something, and even talks about it shamelessly in front of other people, he is a deeply insecure individual who is putting you down for no justifiable reason and doesn’t deserve you at all.

2. He doesn’t seem to have friends

Let’s be honest. EVERYBODY has friends. It doesn’t really need to be a big number (quality over quantity, duh), but we all have those few people in our lives that make us better.

But he never mentions friends, never hangs out with anyone (or extremely rarely), and only spends time with you.

Now, spending time with you is obviously a good thing, but come on, we all need some breathing time every now and again from our partners.

And if he genuinely seems interested in only hanging out with you, that is something you should probably explore.

If he doesn’t have people around him, what is that saying about him as a person and his character? Exactly.

3. He is often threatening to break it off with you

Every time there is an argument or a disagreement, he threatens to leave you. Normal people talk things out and find solutions to their problems, but he immediately goes to the extreme.

He does that because he is ridden with insecurities and is trying to manipulate you into caving in and making his ego inflate.

He needs you to beg of him not to leave you because that is the only way he feels good about himself. He is a very weak man with a fragile ego.

4. He stalks your social media and is vocal about his opinions

Whenever you post a photo, he’s the first one to see and comment. If he sees something that he doesn’t like, he’ll make sure to tell you, and even go so far and tell you to remove it.

He watches your every step there, and nothing happens without him seeing it.

He needs everyone to see that you’re with him, and he lets his presence be known by leaving comments on the majority of your posts.

Whoever stalks you this way has serious issues and is really creepy. Only an insecure person would be so controlling, so keep that in mind.

Even if it’s the smallest thing, you can’t tell him anything without crushing his deeply fragile ego. He is immediately defensive and feels attacked.

Even though he is the first to point out the slightest imperfection in you or anyone else, he can’t take it being reciprocated.

So you don’t even bother saying anything because you know it won’t go well. He cannot accept that he, just like every other human being, is flawed. This means he has serious superiority issues.

Now that you know some signs of insecurities that are extremely unhealthy in an individual, it’s up to you to determine how far advanced it is with your man, and if it’s worth staying.

Just remember: you are nobody’s punching bag. If he can’t handle his own issues, don’t let him use you as a fall guy. Leave while it’s still not too late. 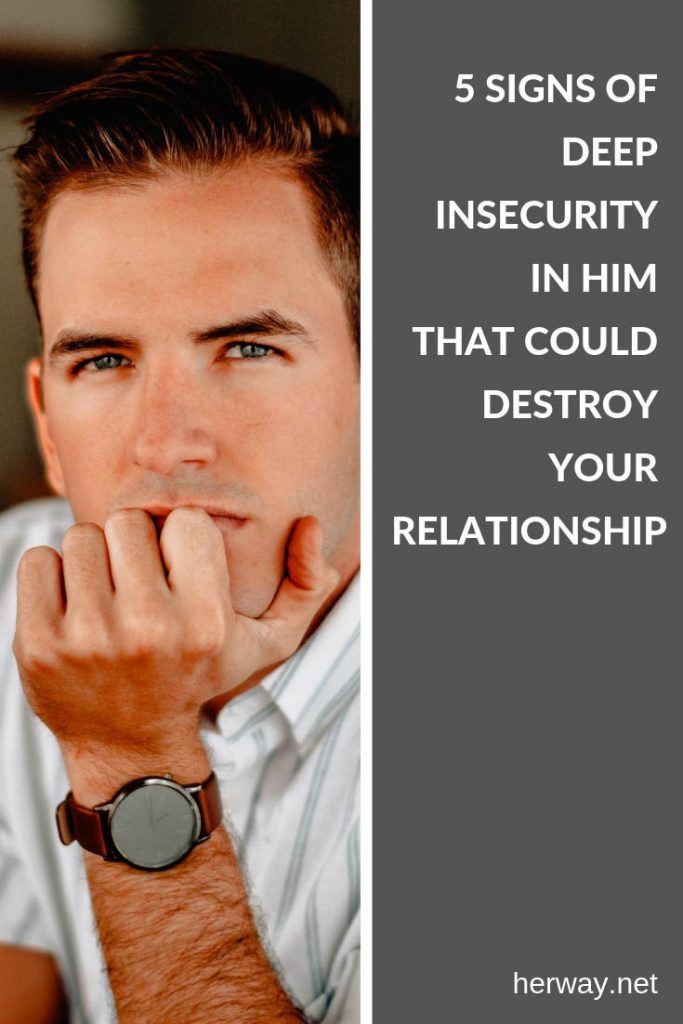