Skip to Content
Contents show
1 1. Wearing loads of make-up
2 2. Wearing ridiculously high heels
3 3. Being so confident that it’s borderline cocky
4 4. Wearing clothes that leave nothing to the imagination
5 5. Talking shit about your exes
6 6. Going along with everything he says without offering your own opinion
7 7. Drinking like a fish and getting wasted on a regular basis

I’m sure you love wearing make-up just as much as the next girl (hell, I do too!) and that’s an awesome part of being a girl—playing with make-up and enhancing our best features.

But there’s a huge difference between making yourself look like a cute, playful version of yourself and looking like a freaking clown.

Guys love to see the real us under all that disguise.

You don’t want him to leave the date wondering what you look like when you take all that off, right? I’m not saying not to wear make-up—just keep it light!

And let me tell you why. Firstly, let’s face it, after an hour or two, your feet are going to be impossible to stand on from all the pain and it’s going to ruin your mood whether you want it to or not.

Secondly, you don’t really know what the guy has planned for the evening and wearing sky-high heels could be the worst thing you can do if you’re in for a lot of walking.

If you really love high heels, then take along a pair of flats at all times so you can quickly change and give your feet a much-needed rest when you feel you need it (and trust me, it WILL happen). 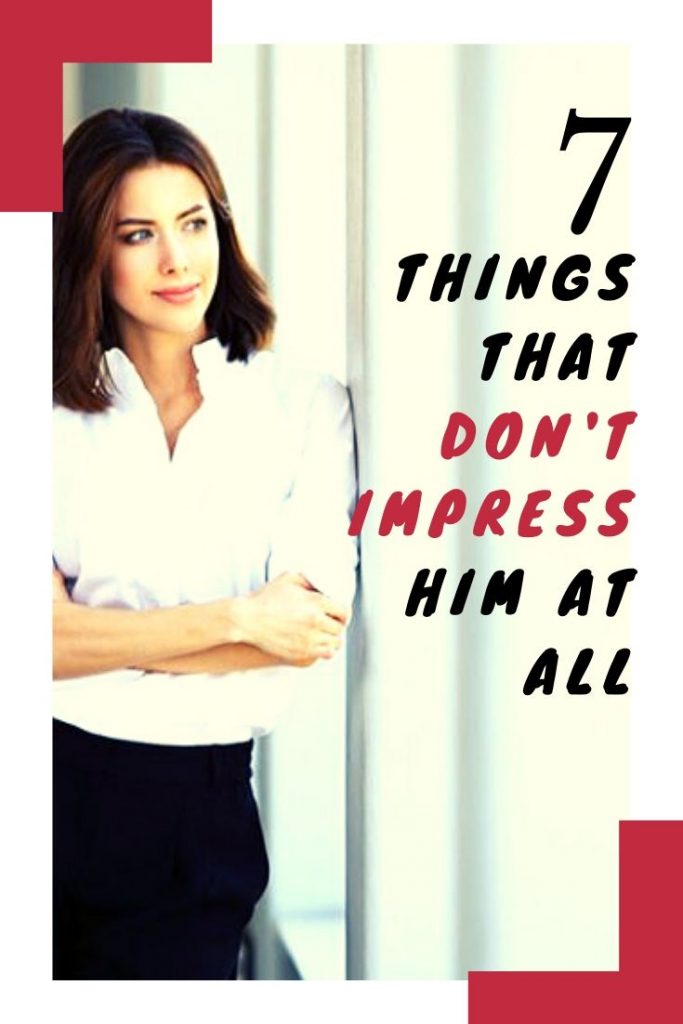 3. Being so confident that it’s borderline cocky

It’s important to believe in yourself, be confident and self-assured.

But it’s never appealing when a girl behaves as if she’s the best thing out there and expects a guy to worship her like she’s all that.

Guys like girls who are chill, fun, able to open up and just enjoy the simple things in life.

But when you look down on everyone, he’s going to immediately be turned off.

You don’t have to prove anything to anyone. Just be yourself and let him see you for who you really are, not for the girl you’re pretending to be. Be confident—but humble.

4. Wearing clothes that leave nothing to the imagination

Wearing a tiny crop top and a skirt that barely hides your booty might seem sexy to you but in reality, it’s just a disaster waiting to happen.

You never know when your boobs might fall out or when your skirt might pop up and show your panties.

And honestly, in my experience, guys really don’t like it when a girl shows too much skin. It’s a little desperate.

I always say that it’s better to leave a little something to the imagination and save it for the privacy of your home when you two are alone.

That way, he will appreciate it much more, because it’s just for him.

The entire world does not need to see so much of you. It’s still sexy when your skirt is down to your knees and your shirt doesn’t look like it’s about to burst open.

5. Talking shit about your exes

If you’re so open about every little detail regarding your previous break-ups and badmouthing all of your exes, how is he supposed to think you’re not going to do the exact same with him?

Not every draining detail is necessary to bring out in the open.

Yeah, it may have been messy but it’s never a good idea talking shit about your ex to someone you’re starting a relationship with.

It paints a negative picture of you and makes the guy think he can’t be completely himself around you.

Leave your exes in the past and focus on this guy and your joint future!

6. Going along with everything he says without offering your own opinion

Guys love women who are bold enough to contradict them when they disagree with something they say.

They appreciate girls who won’t stay quiet and don’t just agree with every single opinion.

Contrary to what you may believe, it doesn’t make you look cute or appealing if you do this, it only makes him think you cannot form an original opinion on anything, so it’s just easier for you to agree with his.

Don’t be a parrot and repeat whatever he says. If you have an opinion, be vocal about it! Talk about the things you’re not on the same page as him with and discuss topics you’re passionate about.

Have your voice heard and watch him fall for you harder than ever.

7. Drinking like a fish and getting wasted on a regular basis

I am in no way saying that alcohol is off limits. Who doesn’t enjoy a glass of rosé or a shot every now and again to take the edge off? We’re only human after all…

But if you make it a point to get hammered almost every time you’re together and you just can’t seem to stop, he’s not going to be attracted to that side of you for much longer.

Don’t make him think that you can’t be sober around him and enjoy a nice night out together without a glass of wine in your hand at all times.

Of course it’s okay to have a drink, just don’t get wasted every single time.

It’s important that you’re able to walk home at the end of the night without stumbling the whole way there—everything in moderation!

So show him what a fun date you are even when you’re totally sober!