You like a guy, and you want to do something about it. It seems he likes you, too.

First, you try to find the courage to be the first one to send a text. And you do, but sadly, you’re not getting a text back.

Like sending the text isn’t stressful enough. On top of that, you don’t even get a reply.

How to deal with it and what to do?

Texting has changed the whole dating situation. Now that communication is too available, we expect the person we like to send the text back that instant.

We know that all of us keep our phones on us all the time, and it’s almost impossible that a text got unnoticed within half an hour.

Before phone and texting, if you hadn’t heard from him all day, that was completely normal. Today, that causes panic!

1. Don’t send one text after another

It’s painful when you don’t get a text back right away, especially because most of us come up with the worst case scenario as to why he didn’t text back.

But sending one text after the other is not going to solve the problem. It will probably make it even worse. Don’t send too many texts, and don’t send texts to his friends because he is not texting you back.

It will make you look desperate and maybe even a bit crazy. It’s definitely a turn-off, especially if the guy you texted really couldn’t text you back for some reason. Imagine his reaction after seeing the phone loaded with your texts? I wouldn’t be expecting him to text back. Not after that scenario.

If you can’t endure not getting a text and you have to send another one to see what’s going on, I mean if you really can’t stop yourself from not sending a text, then at least go with a casual text.

I personally would never send text after text, especially if I hadn’t heard from him after more than two days. Everyone can misplace their phone for a few hours, but when days are in the equation, then I wouldn’t do it.

But once again, if you absolutely have to, then send a casual text. Don’t send mad, threatening texts because you never know what is going on and what’s the real reason he hasn’t texted you back. You can only guess.

Don’t start panicking and imagine the worst case scenario—that he’s not that into you. You don’t know the real reason why he didn’t text you back, and there are so many of them.

Maybe something important came up, and he didn’t have the time to tell you. Maybe he got held up at work or the most usual reason of them all—he ran out of battery. So, before starting to panic, think about whether it’s possible something else happened, and wait for a few hours.

4. Do not touch your phone

DO NOT TOUCH YOUR PHONE! You’ll be freaking out. You’ll stare at your phone. You’ll turn it on a million times hoping that the next time, you’ll see a text on the screen. But no! What should you do when he doesn’t text back? Simple. Don’t text him.

Imagine if he had an emergency and wasn’t around his phone. What happens when he sees the follow-up messages which were clearly the product of your panic state? That guy will never send you another text in his life.

So, resist your urges, and don’t text him immediately after he didn’t text you back.

5. Reach out to a friend

But be careful, don’t complain to your mutual friend. Be very careful who you talk to. While you’re trying not to bomb him with texts because he didn’t text you back, talk to a friend. It will be easier for you to hear advice from someone close to you.

If not that, at least you’ll preoccupy your mind—at least for a while. You’ll make the time go faster, and those two days are going to pass like 2 hours. Just once again, don’t talk to your mutual friends because it’s most likely your misery will reach him.

He’ll see how desperate you are which is even more of a turnoff for a man.

You look at this guy you’re interested in like a prize. And when you feel that prize is getting away from you, you panic because you want it too bad. But instead of chasing him, you should look deep into yourself.

You have to realize that you are someone’s prize, too. You have to have so much self-respect and self-esteem because you are worthy of the chase, not chasing someone else.

Basically, if a guy doesn’t respond to your text in two days, there is only one possible outcome to this situation – he is not interested in you, and he doesn’t want to talk to you. You can send as many texts as you want, but nothing will change his mind.

By following up on one text after another, you’re only making damage for yourself. You can only feel worse and less worthy because someone rejected you. Instead of feeling sorry for yourself, be the one who gets chased, not the one who chases.

If he doesn’t react, if he shows no interest whatsoever, seriously, move on. You don’t need validation from anyone. You don’t need to seek attention because there is a man out there who will give you attention without you asking for it.

Anyhow, move on and cut your losses. You’ve probably dodged a bullet anyway. 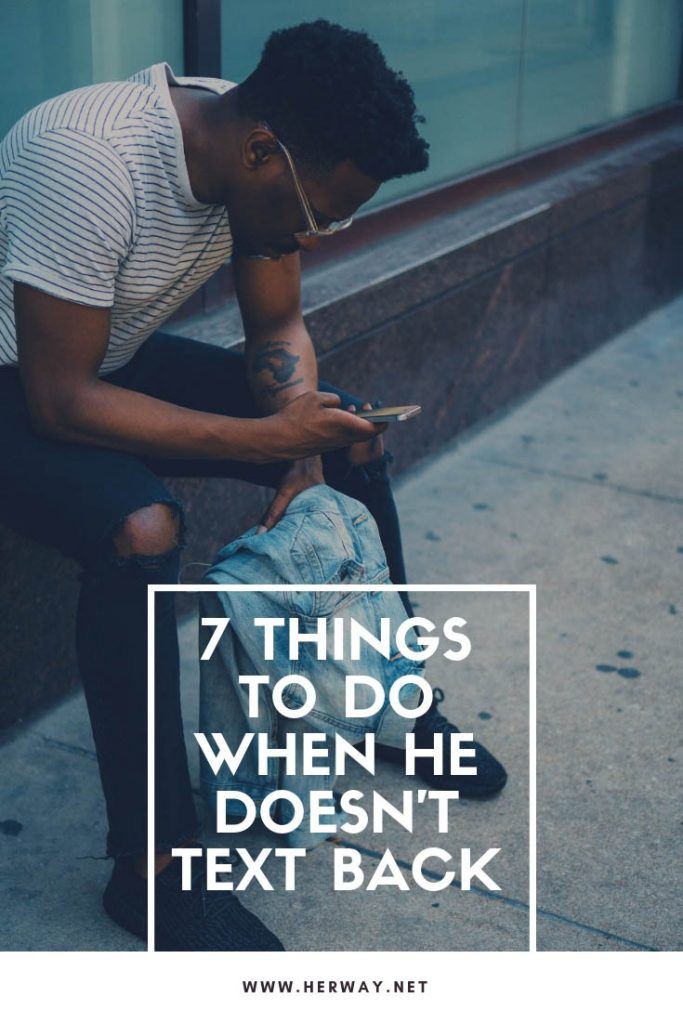