I am officially retiring from chasing after you. I am sick of it. I am tired. I am exhausted. I can’t keep on breaking my own heart by staying by your side.

It was my choice to stay in this thing we had, as it is my choice to put a stop to it. I have no other choice really. I didn’t stop caring about you. Far from it. I still care about you but I care about me more.

Somewhere down the line, I forgot that I exist too, that my feelings matter too. I was so caught up in making you happy, with making you mine, that I lost sight of myself.

I am retiring from being the one who keeps us going.

I feel sad when I think about you not being able to meet me halfway. I initiated most of our texts. I was the one who called when I missed you. I was the one who would drop everything as soon as you called and said you wanted us to hang out.

I won’t call, text or be at your beck and call anymore. I can’t do that. I feel like my self-esteem is getting lower and lower every time I do one of those things.

I am retiring all of my efforts.

It’s excruciatingly painful to be in something that is mostly one-sided. I am exhausted from making all the effort, I am tired of giving and not receiving anything in return.

I see now that all my efforts were in vain. I should have seen that a long time ago. When not everything goes both ways, when two people are not equally invested in something, there is no going forward.

I am retiring from trying to be someone I am not.

Whatever I did, however I behaved, it was never good enough for you. I tried my best, I went above and beyond and it still didn’t quite cut it.

The saddest thing is that I felt the necessity to try that hard. I realize now that I was always good enough. But your indecisiveness and your occasional coldness made me believe otherwise. 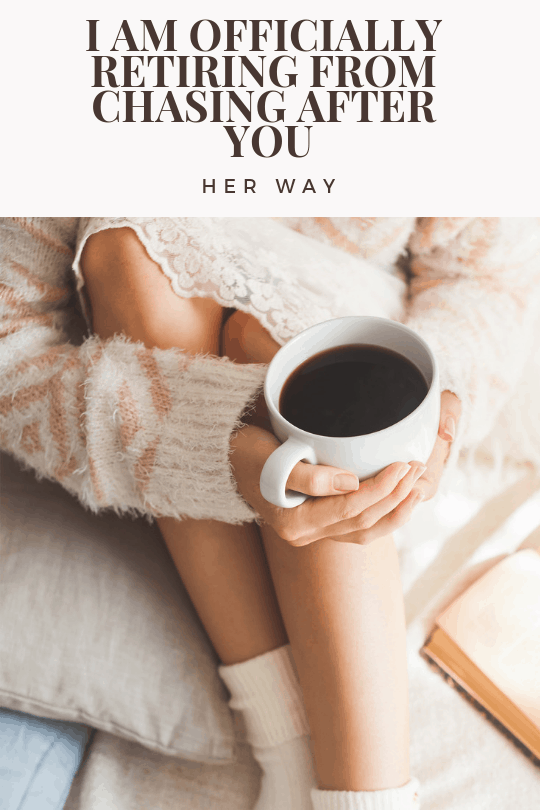 I am retiring from defending you all the time.

So many times when people around me tried to warn me about you, I would defend you. I would find excuses even on those occasions when I knew that they were right.

It’s time I face the truth, that you were always only halfway into this relationship, or better said, in the ‘situationship’ we were in. You were never there for me. You were never completely mine.

I am retiring from waiting for you to be ready.

I know that day will never come. At least not for you and I. It pains me to say but something is missing between us in this story. A lot is missing, actually, as you can see from everything I said before.

I am retiring from dreaming about the future we might have had.

But I am done with those dreams. I am done with all the what ifs. You had enough time. You could have been bolder and decided to try something more meaningful with me but you never did.

I know you will miss me. I know you will regret not taking a chance on us, not trying. But it will be too late by then. By then I will have moved on.