No one likes to be ignored. Being ignored feels like someone is neglecting you as a human being because we all need attention to a certain degree.

When someone you don’t really know ignores you, it’s not such a big deal because you’re not that emotionally attached to that specific person.

But, if someone in your circle of friends or family ignores you, you start panicking because you don’t know what to do or how to feel about it. It is especially painful if the person who ignores you is your husband.

MY HUSBAND IGNORES ME

If you feel like your husband ignores you to the extent that you don’t remember the last time the two of you had a decent conversation, you have a problem. Do you feel humiliated thinking that something’s wrong with you?

Lack of communication is a serious issue when it comes to marriage because it is the essence of your bond. If you two cannot communicate properly, you’re subconsciously creating a gap in your marriage.

Depression, humiliation and being upset are all the symptoms of a lack of communication. So, if you want to save your marriage, finding a solution is of the utmost importance.

10 WAYS TO MAKE HIM OPEN UP TO YOU

1. Find his interests to make him more engaged in a conversation 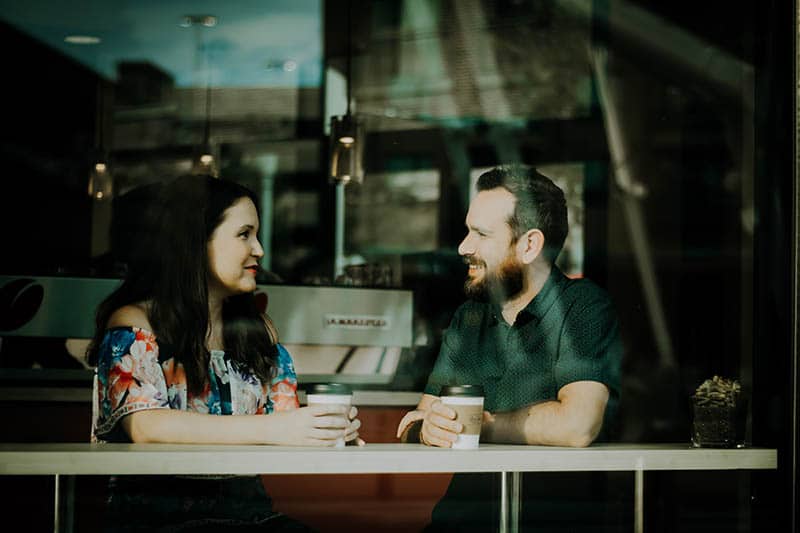 Men are really tough when it comes to communicating. If you want him to open up to you, you have to find a way to make him more engaged in conversations. First, think about his interests and hobbies.

Are there any specific activities that he enjoys doing in his free time? Does he collect vintage toy cars perhaps or stamps? Does he play the guitar? If yes, ask him about the progress of that certain activity to show him that you’re interested in what is going on in his life.

If you’re not sure how to initiate a conversation on a specific activity, just Google it beforehand. I’m sure he will be more than happy to start talking to you because when we are passionate about something, our brains simply light up at the mention of that specific thing.

The key is to make the topic interesting to him. If you do that, half of your job is done.

2. Don’t interrupt him while he’s talking 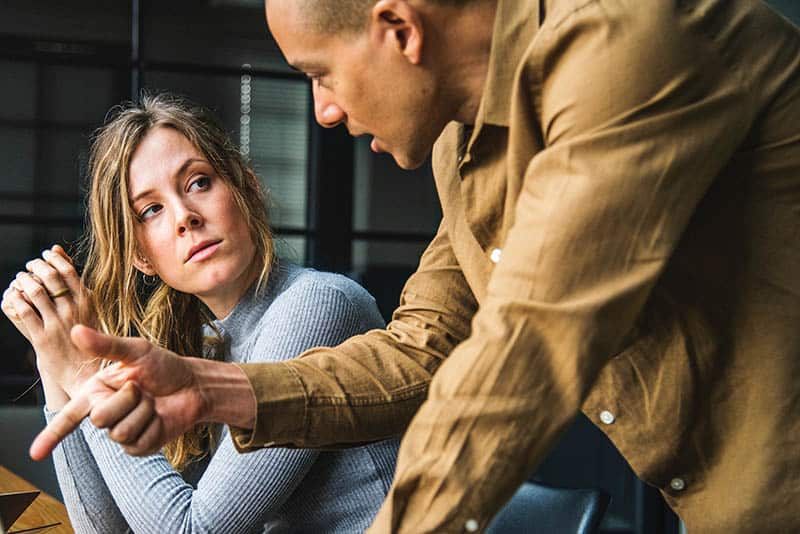 Once you get your man to talk, do not interrupt him because he may retreat again, and all your effort will be in vain. So, the best option is to let him speak, and only intervene if you sense that he is about to stop because men are really case sensitive when it comes to being interrupting.

Men are really hard to open up, but once they’re engaged in a conversation they enjoy, you will not be able to stop them. 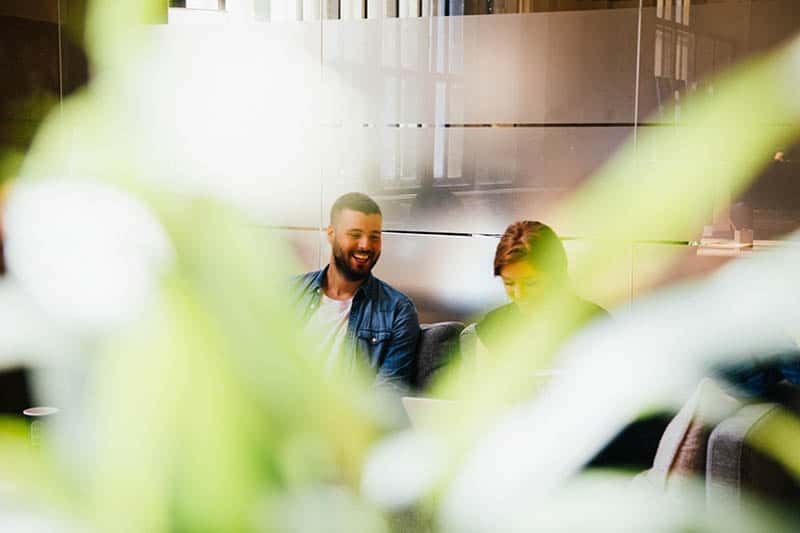 Everyone thinks that only women are those who should be laughing at their partners’ jokes. But, the truth is men like to be treated the same way. Remember the time when you two started dating.

He probably enjoyed making you laugh all the time because it makes men feel like they’ve accomplished something. They want to feel like that, too.

If a woman makes a man laugh, she has won his heart instantly. No matter how mad he is and no matter at which stage of ignoring he is, he will not be able to stop himself from laughing.

It doesn’t have to be big. Simply make a funny comment about that guy on news or something similar. He will immediately cheer up because laughter is very soothing, and it deletes all the negative emotions he may be going through at the moment. 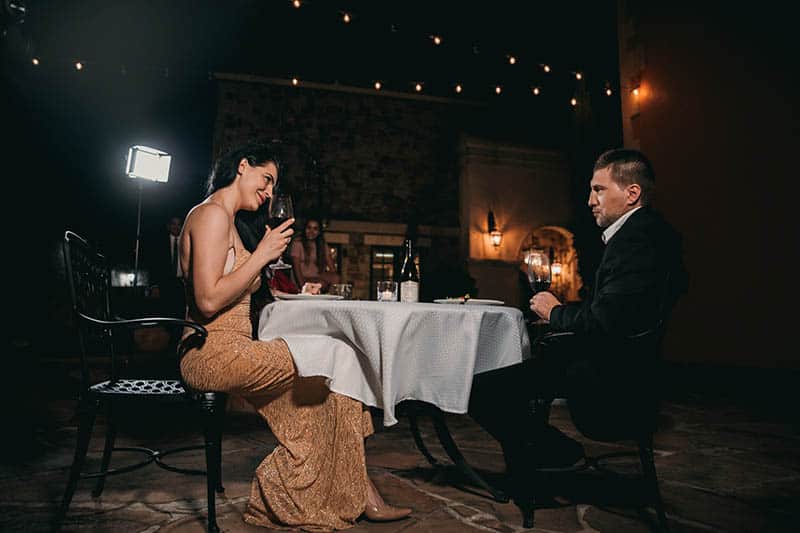 Even though he’s ignoring you, do not give up on the idea of surprising him. Men like to be surprised just as women do.

It doesn’t matter if it is something trivial like his favorite bread or something spicier like a new sexy outfit. I know it is hard to even think of sex games when he is ignoring you, but if you don’t try, you can never know solve anything.

Join him in the shower, and I’m sure that he will not be able to reject you. Revive the old passion, and he will not only talk, he will start eating out of your hands.

Men are weird creatures, and in most cases, the main reason of their retreat is because they sense the lack of passion in your marriage. You can prevent this from happening by spicing up your sex life from time to time.

That way he will be unable to ignore you because he knows that he will not get a piece of his favorite cake – you.

I know this is a little bit sneaky, but it’s how they function, and we just have to adapt to their shifty nature.

5. Talk to him when he least expects it 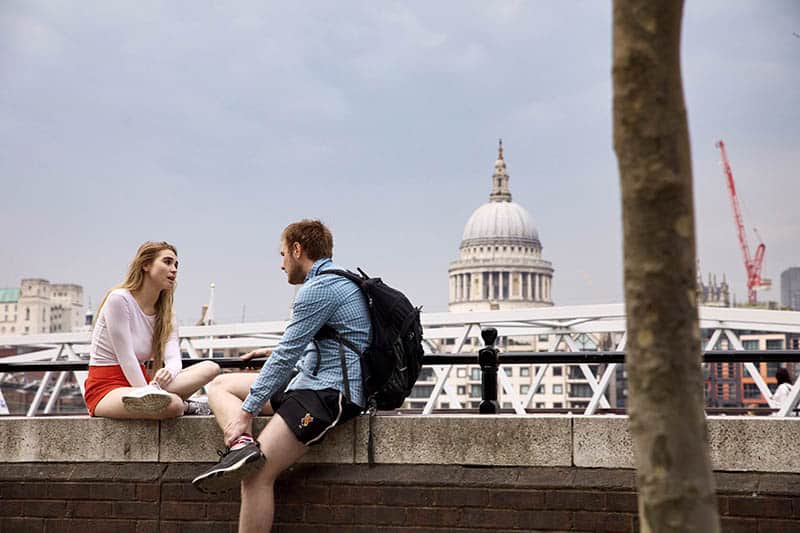 In order to make him open up to you, you have to talk to your man when he least expects it. For example, he’s washing the car or perhaps the dishes and you subtly ask him random questions like: Did you like the game?

You can use this situation to ask him more important questions – questions concerning why he is ignoring you. If you ask something that he isn’t expecting, he will subconsciously answer you without even realizing it.

But, don’t create a list of serious questions that you’re about to ask him when he least expect it. Don’t overdo it because he will get scared, and the situation will get even worse.

If you call your man to talk to him face to face, he will most definitely get scared of you and the possible conversation. Men don’t like direct conversations because they always think you’re going to attack them for something they have done.

Because of this, you have to engage him in indirect conversations as described above. You have to lure him into your cave. Just be tactful and always one step ahead.

Read his mind, and connect the dots. Think like a psychologist, and play dirty if you need to, if it is going to make him open up to you.

6. Tell him how you feel (but don’t attack him) 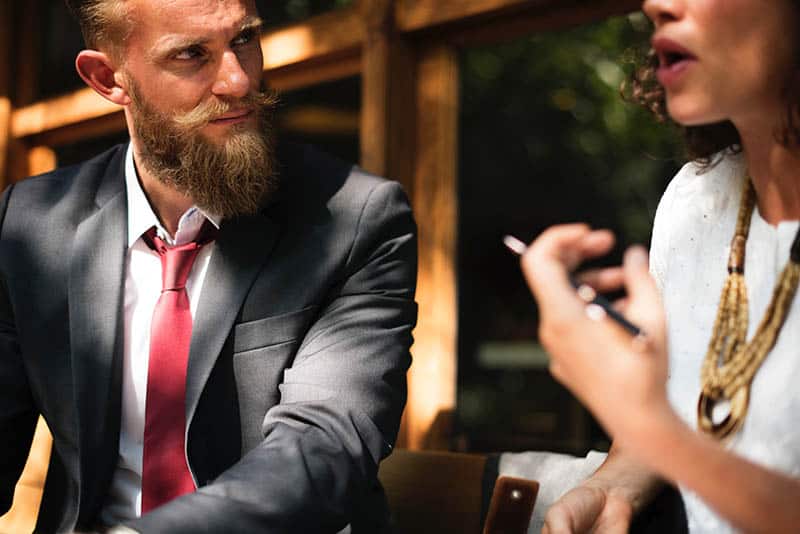 If everything above fails, don’t hesitate to talk to him directly. Whatever you do, just don’t attack him. Tell him gently your opinions about his behavior, and I’m sure you’ll succeed in making him understand you.

Here it is important the way you construct your statements. For example, don’t tell him: You’re ignoring me! I don’t know what to do anymore!

Even though you’re not attacking him directly, he may feel offended by it because of the statement’s structure. Instead, try with: You’re making me feel ignored. I’m not sure what to do about it.

Be sure that he will instantly start replying because he will feel bad and sorry for making you feel this way.

7. Don’t be an open book. Leave some things to the imagination! 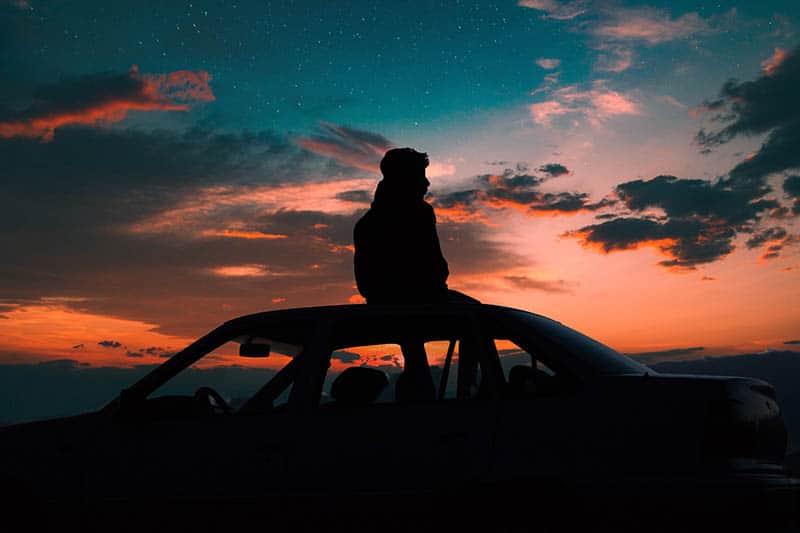 Try using the same strategy he is forcing upon you, but you have to be very skillful and careful with how you’re going to do it. Act like you’re occupied all the time and too busy to notice him ignoring you.

Go out with your favorite people, have a drink or two and don’t answer his calls if he starts wondering where you are. And when you do answer his call, let him know that you’re having a wonderful time (without him), and ask him whether he wants to join you.

He will immediately abandon his man cave and start giving you attention because he knows that you’re good without him.

Instead concentrating on himself, he will give you his full attention which you’ve certainly deserved. 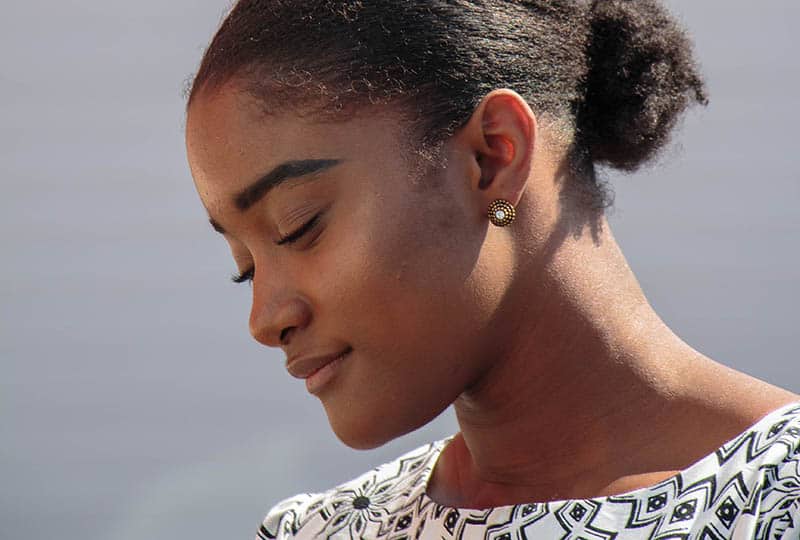 I know it’s hard to stay positive when something like this happens, but please do your best and try not to go wild about it. If you rage at your man, he will ignore you even more and vice versa.

Don’t worry about a thing because every little thing is going to be alright (as Bob Marley would say). Understand that if you stay positive for a certain period of time, chances are higher that he’s going to open up to you.

We all know that no one wants to open up to someone who is all negative about the situation. So, positive thoughts are the best weapon one can use against his “enemy”.

In this case, your enemy is his ignoring you, and if you keep being persistent at solving the situation, the enemy will vanish just like that.

9. Ask someone to help you 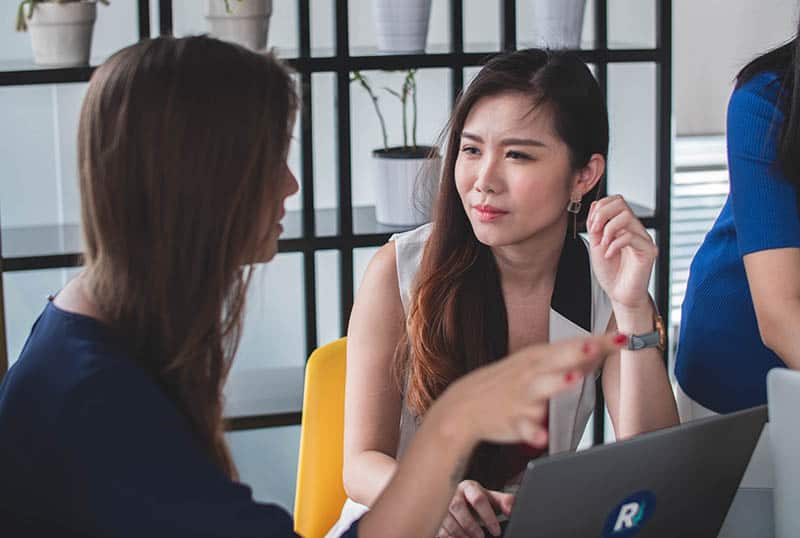 If you’ve tried everything and he’s still not giving you any clues that he’s about to open up to you, contact your friends to visit you. It is easier to resolve the issue when there’s a third person in the room.

The third person can have a better insight of the situation, and this will lead to a better understanding. Perhaps an even better solution is to contact his friends, and ask him them to tell you if they’ve noticed something unusual about your husband.

If they confirm it, try to persuade them to talk to him and tell you later if there’s something you should know about him.

10. Be open to forgiveness 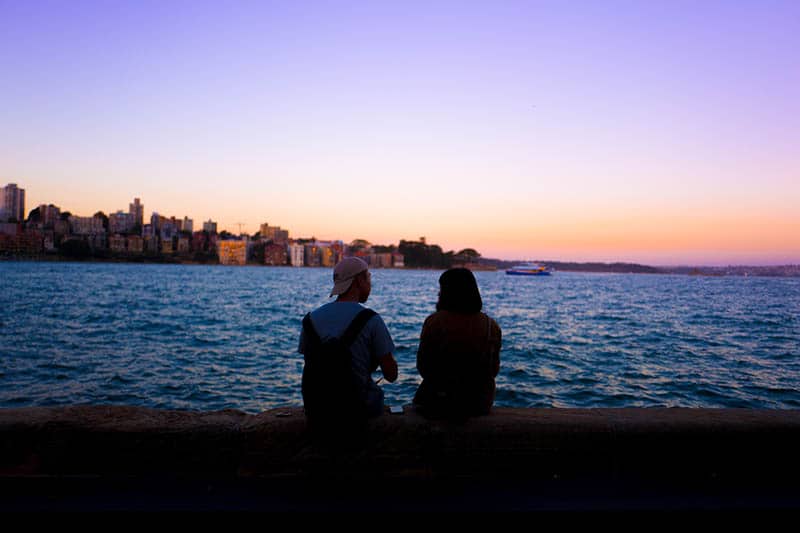 If you succeed in making him open up to you, please be open to forgiveness. Whatever the reason be, I’m sure he will be more than happy to try to make it up to you.

When he tells you that he is sorry, don’t be stubborn and ignore him just to show that you can. Passive aggressive behavior is the worst enemy of marriage. If you want to save your marriage (and I know you do), then you have to learn to be open to forgiveness.

There will always be someone who sins and the other who has to forgive. Perhaps next time you’ll be the one who will ignore him and after, expect him to forgive you.

Remember that marriage is all about compromising with each other. It is a complex construction that consists of love, sins and forgivenesses. 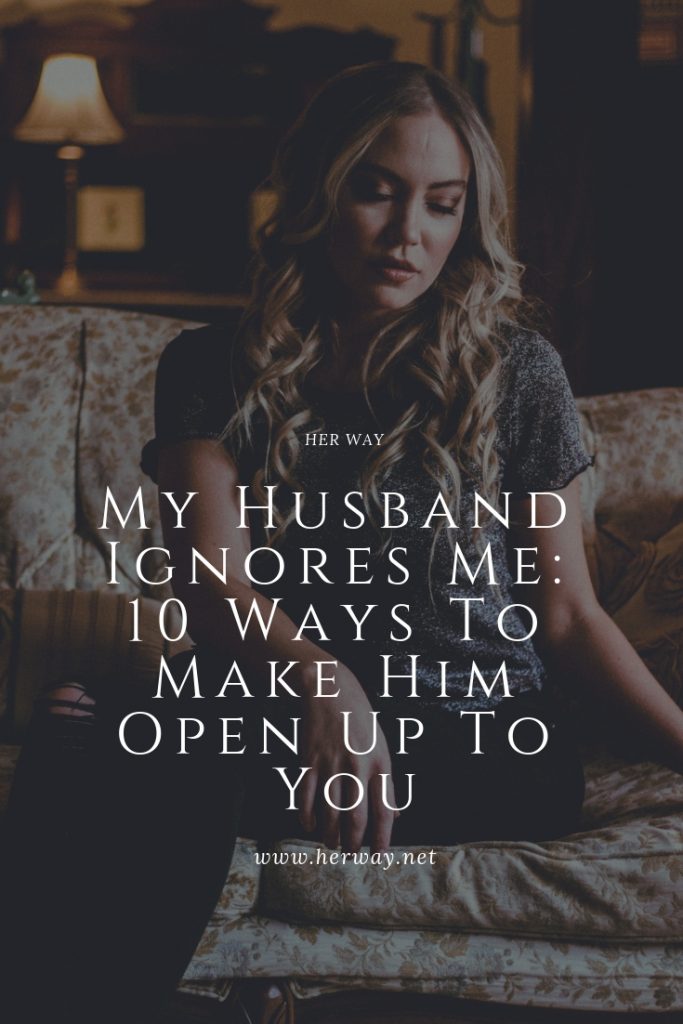