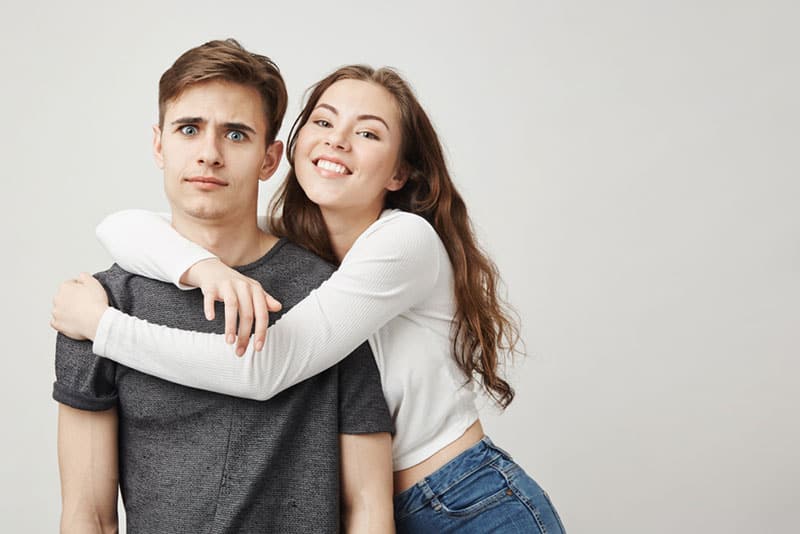 We women often accuse guys of acting silly and crazy. And while this is true (in most cases), sometimes we’re also guilty of acting crazy but we’re just not aware of it.

When we really like that one guy, our brain becomes completely irrational.

We think it’s normal to constantly text or call him, talk about the future too early or ask for access to his every single password for every social network.

When we like someone and especially when we’re afraid to lose someone, we start acting a little bit desperate or we start doing crazy things because we don’t know what else to do.

In our mind, all of this is completely legit but in their mind, it really isn’t.

So, if you find yourself guilty of doing these 10 things, guys will think you’re a little bit crazy!

1. Constantly texting and calling him

Texting and calling him on a regular basis is totally normal and desirable. But doing it a little bit too often might make you look crazy in his eyes.

If you’re sending him tons of messages and then incessantly calling him if he’s not responding throughout the day, he will feel trapped and he will think you don’t have a life of your own.

We all need some space and time for ourselves, so doing this will only make him think you’re desperate and really stubborn.

So, it is always good to make some rules when it comes to texting (and there are also plenty of them on the Internet) to make sure you don’t turn into a texting or calling machine.

2. Talking about the future too early

I know that it feels totally normal to you to talk about the future with someone you really like but guys don’t see it that way.

If you start talking about the future when it’s too early, they will get scared of it and they will think you’re a little bit crazy.

If you do this, you will scare any guy out there and it will be hard to reclaim the balance to the relationship you once had.

So, it is always wise to keep it to yourself for the time being and start talking about it when your relationship progresses.

3. Insisting on meeting his friends and family right away

This one is similar to the previous one. If you keep insisting on meeting his friends and family right away and you haven’t even been on a few dates so far, I’m sorry to tell you but he will think that you’re crazy.

He will feel forced to do something he’s not yet ready for and this will ruin your future time spent with him.

Insisting on such things will only make you look insecure because forcing someone to do something is the biggest sign of an insecure attachment style in a relationship.

If you have a strict list of A-Z demands that you’ve devised specifically for him, he will get scared immediately.

Again, making demands in a relationship is another sign of being insecure. There are other ways to make him do things you desire and making demands is simply not one of them.

Instead, you should be proud of and confident in yourself and tell him when he fucks things up but in a nice way.

When you let him know that you expect certain things in a relationship (without making demands), he will be more than happy to fulfill them.

Trust is the basis of every healthy relationship and when it is disrupted, nothing will ever be the same.

You build trust with your words and actions and not by demanding him to give you access to all his passwords.

If you do this, he will definitely think you’re crazy. Even though I completely understand a woman’s need to have everything under control, some things are just not right.

And even if you had all of his passwords, this would only make things much worse.

Constantly living in fear of finding some hidden actions by them will only force you to jump to conclusions for no apparent reason.

6. Getting upset over little things

It’s perfectly normal to get upset over some things you are really annoyed by but it is not normal to be constantly upset over every single little thing he does.

If you do this, you will upset him as well and there you have it! You will create an emotional mess that will make your relationship unstable.

7. Digging up personal information about him behind his back

I understand that you want to know everything about him at any cost but you should never dig up personal information about him behind his back.

For example, if you decide to contact his ex-girlfriend to find out a few things about him, he will label you as the crazy one.

Also, if you force his friends to share his personal information with you, he will definitely be mad at you and he will see this as a sign of intrusion.

If he’s not texting you back immediately, this doesn’t mean you should follow him around the city or similar.

You don’t want him to think that you’re some kind of a psycho who doesn’t want to let him live in peace.

Guys are especially annoyed by this one, so you shouldn’t do it under any circumstances. And it will also save your nerves as well.

Do you have a tendency to act passive-aggressively after a big fight? Do you ignore his every word and attempts to apologize to you?

Passive-aggressive treatment is every guy’s biggest nightmare. They simply fear it like the plague and they never know how to approach you when you hold a grudge forever.

10. Constantly changing your mind and expecting him to act accordingly

If you one day want one thing and another day you want something different, he will lose his mind and think of you being crazy.

It is really not fair to expect a guy to understand what you really want if you’re not being consistent regarding your own decisions.