Aries can’t cover up the fact he’s in love. If he really wants you and doesn’t want to live without you, he will make sure you are aware of that.

Staying in a loveless relationship where there is no attraction and passion is not an option to him. He will rather risk hurting you by telling you he’s not interested than stringing you along—which is actually a good thing for the long haul.

If he wants you, he’ll come and get you. Everything other than that is a sign that he’s not interested.

He is the most ambiguous sign when it comes to ‘he loves me, he loves me not’! You’ll have no idea if he’s interested or not. But, regardless of his behavior, he has a tell which can help you see if you’re just wasting your time with him.

Taurus men are very curious. It takes a lot of time for them to decide whether they like someone or not, so they ask a lot of questions and want to know everything there is to know about you. So, if he shows interest in your life and who you actually are, then you definitely have a shot.

Gemini love to flirt. If your Gemini man doesn’t show affection, try hard to impress you, and make you laugh, he is definitely not that into you. If he doesn’t insist on going on adventures together, he probably wants you just to be friends.

When a Gemini man likes you, he will turn his full charm on. He will use every trick in the book to seduce you and make you fall head over heels in love with him.

If a Cancer man has feelings for you, you’ll definitely know it. They are natural caretakers, and every Cancer man will make sure to give you everything you need. If you’re sick, they’ll come running to you with a bowl of warm soup and hot tea.

If your Cancer man reacts in any way other than showing affection and worry, he’s definitely not that into you.

Leo men go out of their way for the girl they like. If you’ve ever dreamt of a certain situation or something you’d like to do or see, and if you told him that, be sure he will make your dreams come true, but only if he’s into you.

He’ll pay attention to everything you say, and sooner or later, he will surprise you with everything you want and crave. Leo will make sure that the woman he likes doesn’t miss anything from her life.

Virgo’s are unsure about everything. Their analytical approach often destroys any chance for love. Why? Because it takes them forever to show or say they like you, and usually most women lose interest or just think their crush is not interested after all.

Here’s where Virgos make a mistake every time, so good luck to you with finding out whether he likes you or not. Although, if you’re extremely lucky, he will buy you small things as a sign he thinks of you when you’re not around. That is the only clue he will give you, so open your eyes and pay attention!

A Libra man will show you his affection through social skills. It’s as simple as that. Since they are real social butterflies, they will show you they care for you through conversation.

If they want to engage you in conversation, logically, they find you interesting, and they want to explore you a bit more. So, as long as a Libra is talking to you about interesting subjects, you can rest assured he is interested in you.

Scorpio men are super possessive and jealous. If the woman they like talks to other men, he will go crazy. Then, judging by his behavior, you can be positive there might be something going on between the two of you.

He will ask you a million questions about guy friends you’re hanging out with because he wants to make sure he is better than they are. His jealousy may be freaky or cute—depends on how you look at it.

Sags are brutally honest which can be both good and bad. The good thing is that you won’t have to wonder whether he likes you or not. They will tell everything they feel about you right to your face without holding back.

But the bad thing is when they are not into you, they won’t have any problems breaking the bad news coldly and distantly, not giving a damn about your feelings.

Capricorn men are hot-headed and stubborn. Making compromises is not how they roll. So, taking that into consideration, if you manage to put a Capricorn up for something they don’t like, he definitely likes you.

Otherwise, if he turns your request down with a solid no, taking nothing into consideration, he doesn’t like you that much. Sorry.

It has probably happened to you that you’ve been sending all the signals possible that you like an Aquarius man, but he doesn’t seem to get them. Well, I hate to break it to you, but they are not stupid. They get your signals perfectly well—the problem is they are not interested.

When someone likes them but they don’t like that person back, they will act like they are clueless, and you might interpret that as playing hard to get, but sadly, they are just not that into you.

Pisces can’t hide if they are in love. As one of the most sensible and sensitive signs of the zodiac, Pisces fall in love at the speed of light, and they want to do something about it as soon as possible.

If they are not showering you with love and attention, they are not that into you because the end of a night out with a Pisces who’s into you always end up in a kiss and not in a handshake. 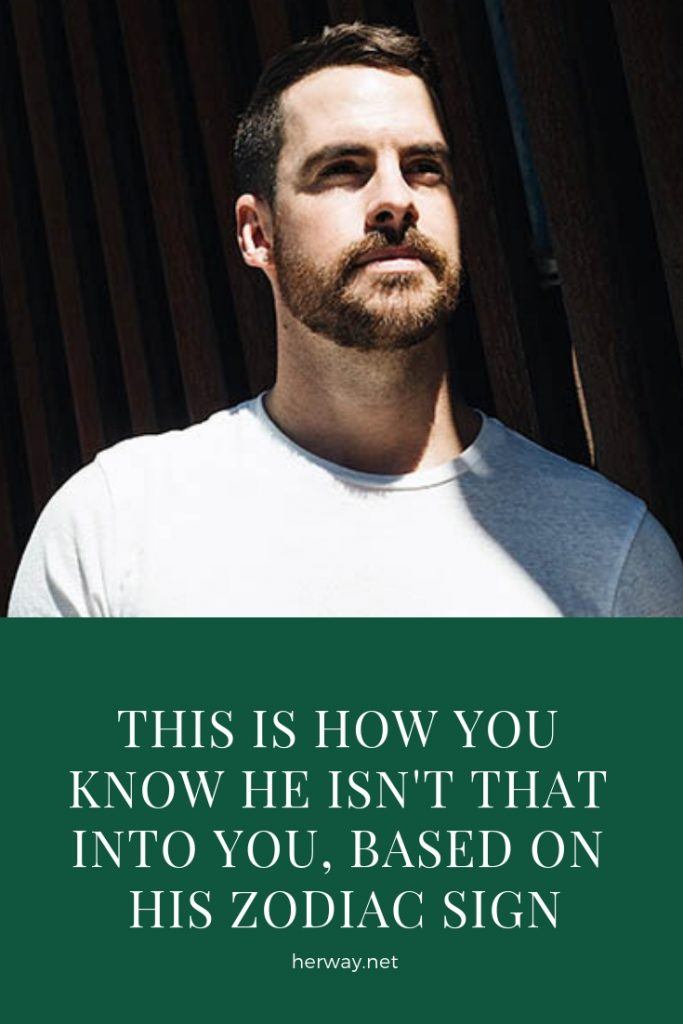