Too often, having high standards is confused with being overly picky or impossible to please, but is that really the case?

Having high standards means you’re not putting up with anyone’s bullshit. You know exactly what you want, and you’re not here to waste anyone’s time. You’re not afraid of saying ‘No’, and knowing what you’re after saves you so much time.

So why is having high standards always seemingly frowned upon by the people around us?

Sometimes it can appear as if you’re judgmental, cocky, or unreasonable. But in my opinion, knowing exactly what you want in a person can only improve your chances of finding them, and help you save time you’d normally spend on people you know you’re not interested in.

People can think what they want, but those who are a little picky really do have more luck in finding the right person, simply because they know what they want and how to get it.

Having high standards is important both in relationships and in life, and here’s why

When you know what it is that you want, you’ll have an easier time finding it

Like all of us, you’ve probably gone through so many crappy dates. Each time, you just knew that it wasn’t going to work, but you pushed through, having that tiny glimmer of hope it might actually turn into something real.

It never really does, and all it does is make you never want to go on a date again. I mean, what’s the point? There is always a chance the guy will be your polar opposite, and you’ll be counting seconds before it’s actually over.

But when you have high standards, you don’t go out with just anyone. You know what you want. So what if it makes you seem a little superficial? What’s inside is what matters most, sure, but before you get to know him, shouldn’t you be physically attracted to him?

So, never feel bad for going after a particular type. That way, you weed out all of your bad matches and improve your odds at finding just what you’re looking for.

Even better if you’re online dating. You can type exactly what you’re interested in, and only those that are seemingly good matches for you will turn up.

All you’ll feel is happiness for going after what you want and not lowering your standards for anyone. Never apologize for that.

You know your worth and you put yourself first

Before taking care of others, you make sure that you’re okay. And that is more than fine. When you know you’re good, it’s easier to make sure everyone else is, too.

You understand that it’s important to always be your own priority, because if you’re not, nobody guarantees you’ll be anyone else’s.

By knowing your worth and not accepting anything less than what you deserve, you let everyone know you’re not here to mess around, and if they don’t treat you right, you’re walking out the door.

That way, those who aren’t worthy of you will be out of the picture, and only those capable of being with a strong, ambitious, and driven woman will stay.

Maybe the simple reason why you have such high standards is the fact that you are an amazing woman, and you know when to ask for more than what you’re getting.

There is nothing shameful in knowing your qualities and asking for what you feel you are deserving of.

Just be careful and ask yourself every now and again if what you’re saying ‘No’ to is something that is truly not worth your time and energy or if maybe you’re just too used to saying it.

Check yourself from time to time to make sure your head is clear and that what you’re doing has its reasoning. You don’t want to risk appearing big-headed, which is why it’s important to reel it in if you deem it necessary.

Your partner will appreciate your ‘no-bullshit’ demeanor

Sometimes, the biggest obstacle in relationships is miscommunication and being passive aggressive. But by being outspoken and straightforward, you lessen the chances of this deteriorating your relationship.

People tend to sulk when they don’t get what they want. Sometimes, they just expect their partners to read their minds. When this mind reading doesn’t happen, they resort to the silent treatment, but none of that ever leads to anything good, and it’s extremely unhealthy.

Luckily, you don’t have those issues.

You know what you want out of your man, and you say it without hesitation. When you have a problem with something he did or didn’t do, you won’t hesitate to point it out.

The whole point of this is to be honest, transparent, and give your relationship the biggest chance it has to succeed. You never mean to hurt his feelings, and he knows that. Honesty is your policy, and whomever can’t take it, isn’t your kind of guy.

The only issue with having high standards is that there is a fine line between judging people for no real reason and simply wanting somebody who will make you burst with happiness.

Always be considerate of other people’s feelings. Don’t let your bold personality make you seem off-putting to people who don’t even know you yet.

Keep your mind open, and don’t say ‘No’ those who aren’t the exact thing that you have in your head. Sometimes, people can surprise you if you give them a chance.

Stick with your ways, and don’t change yourself for anybody, but all I’m saying is, be kind while doing so. Make sure you’re doing the right thing and not hurting anyone’s feelings in the process.

If you’re in a relationship, be sure to show your partner how much you love and appreciate him. Sometimes, this can get lost when you’re so focused on other things, so never let him doubt your love.

Just because you won’t settle for less than you deserve, doesn’t mean you shouldn’t be a little flexible with your man. Chances are he’s a really great guy if he meets your every need, so be considerate if he ever messes up.

We’re all human, and we’re all prone to making mistakes. Being forgiving and letting him be a flawed human doesn’t make you weak. It makes you that much stronger and it shows character.

Know what you want, and always fight for it, but also know when to turn the other cheek. Therein lies your power. 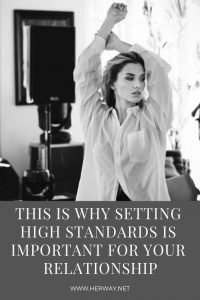 What A Virgo Man Wants To Hear: 15 Things To Tell Him

[…] can be critical but not for his own sake – he keeps himself and others to high standards. However, underneath a seemingly cold exterior is a gentle and shy person who will do anything for […]