Look me in the eye and say it again. Tell me again how it’s not your fault and that she was stupid for leaving you. No, she’s not. You can’t blame her. She had no other option because of your attitude, your words and the way you treated her. You were never the one who deserved to have her on his side. You didn’t know how to keep her safe and give her serenity. That’s why you’re left alone now, by the only woman who was ever willing to give everything she had to you.

You can’t blame her for finally realizing that you had been lying to her. You’d been telling her stories that weren’t true, just because you thought that you would seem a bit more interesting that way. But that wasn’t actually necessary, taking into consideration that she loved you for you. You were telling her tales and you never even once took a moment to think about what would happen if she found out that everything was a lie. Lying to her about whom you were going out with? Lying to her about your plans and where you were going? It was all such a huge mistake. But the biggest lie you told was when you told her that you’d be there for her, because you weren’t.

You can’t blame her for realizing that she should be a priority, not an option. Her eyes are finally wide open and she sees that she was always only an option to you. This doesn’t mean that you chose another woman over her but rather that everything else in your life was ten times more important than she was. You didn’t know that work and your so-called obligations toward your friends were going to drive her away from you. She had enough of fighting for your time and effort. She had enough of nights spent crying because you, once again, had canceled a date. She’s gone now because you weren’t able to put in enough effort to make her your priority.

You can’t blame her for loving herself. She loves herself enough to be able to see when someone else doesn’t. You didn’t love her enough. You never showed your love besides words but words don’t mean anything when your actions don’t follow them. Telling her that you loved her wasn’t enough, when the next moment you’d scream at her, telling her that she wasn’t worthy of your attention. These things break people. You should’ve thought twice before doing it.

You can’t blame her for realizing she deserves something better. She deserves someone who’s going to treat her with the utmost respect and love that anyone can. She deserves to be shown affection every step of the way toward eternity and you weren’t able to do that for her. That’s why you don’t deserve her. You’re just like all those other men before you, and as much as you’d like it to be a lie, it’s the truth. You hurt her. You broke her heart. You made her leave.

You can’t blame her for leaving. What other choice did she have when your relationship didn’t even feel like a relationship anymore? It felt like torture and pain, without any sign of love. She left and she won’t be coming back to you anymore because she knows better now than to fall for someone who doesn’t make her feel special.

You can’t blame her for moving on. She has someone new in her life now and she’s happy. Just stay away from her. You weren’t able to love her. You couldn’t treat her right. She can move on and he will treat her right. He knows that she’s wonderful and that she deserves all the love a man can give her. That’s why he is worthy of her, unlike you. 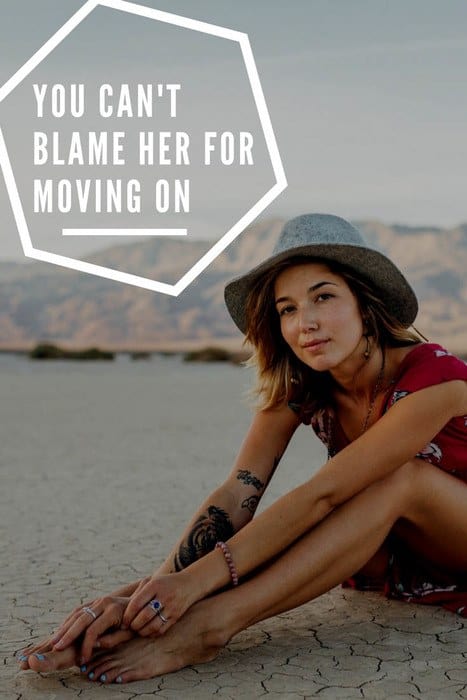