Is it just me or there are more of us who get that burning desire to go a bit back into the past as far as dating habits are concerned?

This hookup culture is really tiring at times, and I catch myself wondering if there are still men out there who are willing to make an effort to awe a woman.

Some old school dating habits should definitely make a comeback—or at least they should preserve their essence and undergo a modernization process.

This is how it should all look:

Contents show
1 1. A man asking a woman out on a date a few days ahead
2 2. Making your intentions clear right from the start
3 3. Trying to look your best
4 4. Slow dancing
5 5. A modernized version of polished manners
6 6. Walking a woman to her front door
7 7. Making a grand romantic gesture
8 8. No wi-fi
9 9. Slowly building a relationship
10 10. Dating for the sake of dating and not to get into somebody’s pants
11 11. Fixing things instead of giving up

1. A man asking a woman out on a date a few days ahead

I am not saying that anything is wrong when the woman takes the initiative, but for me personally, the whole dating experience is better when the man makes an effort and shows his genuine interest.

A man who took his time and planned a date is so rare these days. All we usually get are last minute plans and late-night calls to hang out—which is really sad.

2. Making your intentions clear right from the start

This is definitely one of the best things about old school dating habits. You knew when you were going steady with someone or as we would say it ‘exclusive’.

There wasn’t so much fuss about having ‘the talk’. You would just straight up ask someone if they like to be with you—well men usually would because it was a manly thing to do, even if back then there were some who were exceptions to the rule.

3. Trying to look your best

You know what they say: “You never get a second chance to make a first impression.” That’s true. We need something that will attract us before we get to know the soul of the person we are dating.

It’s nice when both men and women make efforts to dress nicely, smell good, and make someone notice that you want to impress them. Efforts are sexy.

When you go clubbing these days, you don’t really get the chance to slow dance. The music is too loud, and you can’t hear one another.

Luckily, there are still some places that you can slow dance at, and you should explore that option. Even if you are not a good dancer, it’s an opportunity to learn something together.

The sound of music and a laid-back atmosphere relaxes both men and women and enables them to talk with more ease. Also, it puts them in a position where they are physically close which increases the sexual tension between them.

5. A modernized version of polished manners

Even though opening car doors (or any doors) for a woman, a flower when you go out on a date, pulling out her chair or something along these lines sounds great and it shouldn’t go out of style, it would be a bit awkward for most people these days.

But why can’t we just modernize some things and bring them more up to date? For instance, polished manners these days could be letting a woman order first; walking beside her holding her hand instead of a few steps ahead of her; sending a goodnight text; etc.

6. Walking a woman to her front door

It’s not just about good manners. It’s one-on-one chivalry, and it should never go out of style. First of all, it’s a great kissing opportunity, and it smells of romance in this not-so-romantic modern era.

Secondly, it makes a woman feel safe. On a subconscious level, it sends the message that the man is interested in the woman’s safety, and we could all use more of that these days.

This might be wishful thinking, but would it be nice if someone did something for you that would blow your mind. Like a heartfelt love letter, poem or even a serenade underneath your window.

Maybe today this could look more along the lines of making you a cup of coffee in the morning, leaving cute post-its with love sayings all over the apartment, hiding chocolate in your purse. These little big things would knock any girl off her feet.

It’s good to unplug from time to time. Our phones take our time and our attention. We don’t listen to half of the things the other person says.

That’s why it would be great if the two people on a date would turn off their wi-fi (or at least avoid checking their phone every 5 seconds) and just talk to each other like in the old days.

This should definitely be applied these days, and all of us would have better chances for love. We get impatient, skip the steps that lead us to a relationship, and jump straight in, hoping for the best.

The old school way had its own pace, slower but greater in quality. There was no need to rush anything. They enjoyed the process and made an art out of dating.

10. Dating for the sake of dating and not to get into somebody’s pants

Sex is a part of a relationship. It shouldn’t be a taboo anymore. But we’ve taken it to another extreme where it’s assumed and expected. That’s not right. The expectations of having sex after a first or fifth date are burdening.

I don’t want to sound like a prude, but it would be nice to date somebody who wants to get to know you, talk to you, and know a bit more about you than your first name.

Feeling connected with somebody on a personal and emotional level makes sex even better and more meaningful.

11. Fixing things instead of giving up

This is a crucial point in old school dating. People back then had a whole different mindset. They were fixers and not quitters. They were ready to solve problems and really hear each other out.

Relationships demanded work back then just like they do now, but love was always worth of all the efforts and investments.

That’s probably why their marriages lasted, and they got the chance to grow old with somebody they cared for. 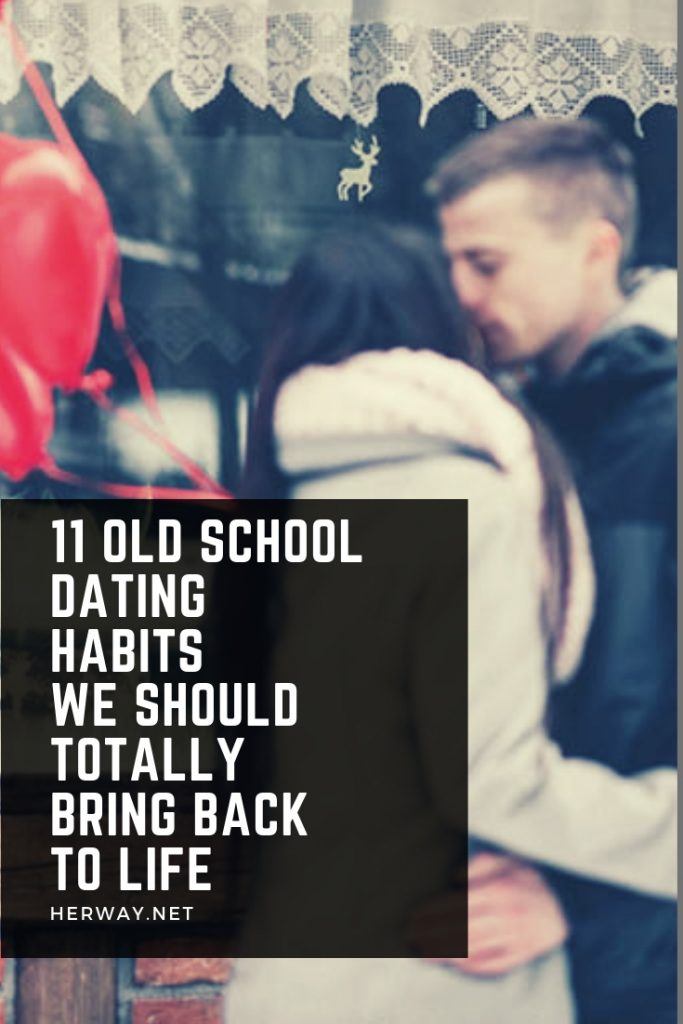