1. He opens the door for you when you enter or exit the room. Yes, there are still some gentlemen left out there.

2. He texts you in the morning. It doesn’t have to be anything complicated, just a good morning text.

3. He pays attention to what you say and he remembers everything. He takes you seriously, so even when you talk about trivial things, he is all ears.

4. He treats you like a lady because you are one. He cares about what you think of him because he loves you. Therefore, he wants to leave a good impression.

5. He always has an excuse to be close to you. He hates distance between the two of you because it hurts him not seeing you often, preferably every day. That’s nothing in comparison to the fact that he wants to spend a lifetime with you.

6. He makes plans with you because he knows that you are going to be together for a long time. He is committed and he’ll never let you go.

8. He calls you to ask your opinion about something. He trusts you enough to let you influence his decisions.

9. He does the house chores—even if you’d rather he doesn’t because you have to do it all over again—but he does them anyway because he really wants to help you.

10. He rushes in while you are in the shower just to give you a big kiss. He feels he needs to and wants to do it that second, so he does it.

11. He buys your nephews toys and hangs out with them like they are the same age.

12. He lights up when you walk into a room. To him, you are always the prettiest one whenever and wherever you walk in.

13. He brags about you to his friends all the time. He is so proud of you and he loves you so much that he can’t hide it.

14. He brings you water when you don’t feel like getting up from the couch and he turns the lights off because you’re too tired (and lazy) to do it. He loves you—nothing is hard.

15. He steps in front of you in the road, so you don’t get splashed by a car racing by in the rain.

16. He always remembers what to buy at the grocery store. If he doesn’t, he’ll call just so he won’t miss anything.

17. He holds your hand so tightly when you are in a crowd, so you don’t get separated. He goes first and holds you while he gets through the crowd. And he looks at you every second to see if you’re okay.

18. He’ll call you right away when something funny happens to him—even if you are in the middle of something so important. He just needs to share it with you, no matter what.

19. He teases you and gets on your nerves—but in a cute way.

20. He hates getting dressed up and going to important events with you, but he will do it anyway.

21. He takes you everywhere he goes—if you want it, of course. He is not hiding you from anyone and walks the streets proudly along your side, holding your hand.

22. He surprises you all the time when you least expect it. Even on just a regular day, he will pop up at your office with flowers or whatever it is you like.

23. He’ll go shopping with you and wait patiently while you’re trying on dresses. He’ll do pretty much anything just to be with you.

25. He gets that you are irritated when it’s your time of the month and he’ll do anything to make it more comfortable for you and to make you feel more relaxed.

26. When you come back home from work, he meets you at the door and hugs you immediately. Even if it’s pouring rain outside, it doesn’t matter. He’ll hug you anyway.

27. He takes out the garbage without you reminding him to do it.

28. He puts a blanket over you when you fall asleep next to him while you’re watching a movie. He wakes you up gently and helps you get to bed.

29. He buys you shampoo without you saying it because he notices that it’s running low.

30. He is the happiest person alive when he manages to get you to smile even when it’s the last thing you want to do.

31. He will never stop trying to make you laugh.

32. He’ll embarrass himself just to get you out of a tricky situation. He’ll do it to get all the attention you don’t want off of you. 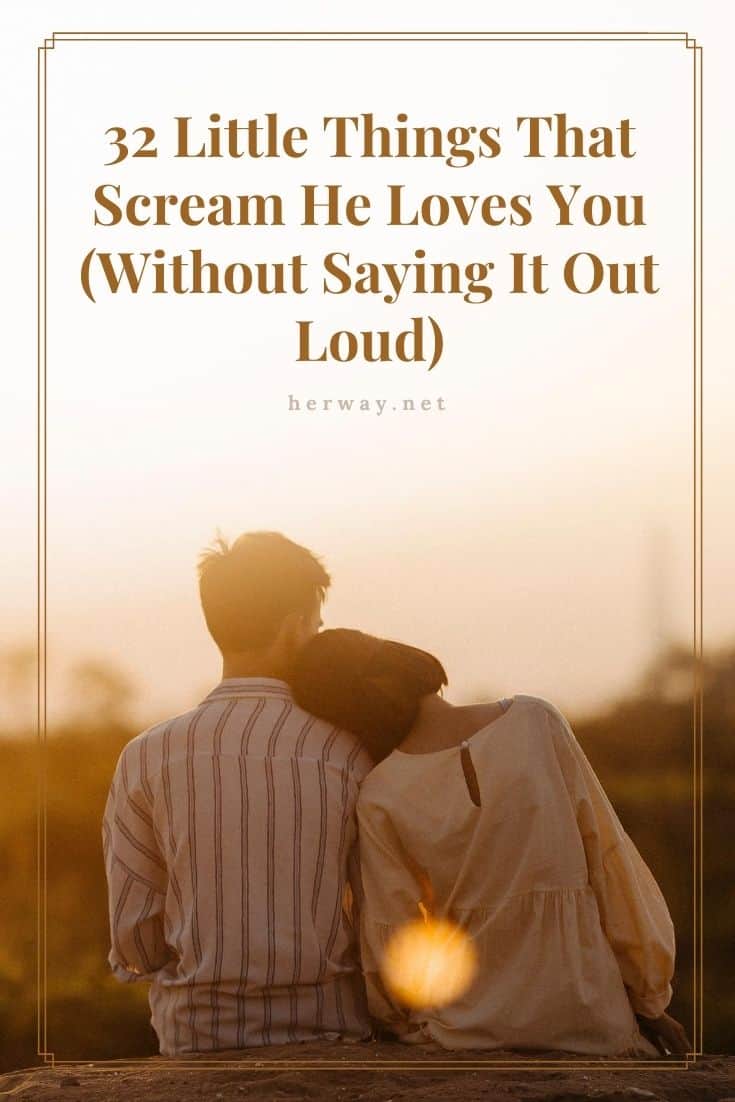 If You’re Dating A Unicorn Man, He Will Have These 45 Traits

[…] not just big on words. He tells you he loves you, but he also does a million little things every day to remind you of […]

Is Your Gut Feeling You're Meant To Be With Someone Right?

[…] topic. Your opinions are similar, and even when they’re not, it’s easy to accept. From little things to big life decisions, it feels like compromise is possible every step of the […]

What A Virgo Man Wants To Hear: 15 Things To Tell Him

[…] and finds even the smallest details you tell him interesting. He’s going to remember the little things you tell him for a long time. This can make you feel like you can tell a Virgo man secrets that you […]

When A Guy Looks Down At Your Body, What Is He Thinking?

[…] a lot because he has a reason to smile. He’ll smile with his eyes and give you a toothy grin. The little things you do will endear him because it’s you. His laughter when he’s with you won’t be […]

Give Him 3 Days – The Magic Behind This Powerful Dating Advice

[…] you a good morning or simply tells you how he missed you deeply, then things are pretty clear: he honestly loves you and doesn’t want to lose […]