Do you ever think of the time when you were naive and struggling to survive in the jungle called the dating world? And now you’re probably laughing at every single thing that made you feel frustrated because you’re totally over it. You’re totally over men.

You no longer give a damn what they will think of you or how you should behave because you’ve finally found your inner peace and happiness. You have become your number one priority and being single is the best thing that has ever happened to you.

Contents show
1 1. You’re no longer anxious when it comes to first dates
2 2. You have different priorities
3 3. Hot guys are simply overrated
4 4. The good guys are not as good as they seem
5 5. You have an aversion toward overly romantic things
6 6. People are no longer interested in your love life
7 7. You look at sex differently
8 8. Shaving is not something that you bother yourself with

1. You’re no longer anxious when it comes to first dates

Before, you would be so nervous when it came to first dates that every single date would start with a vomiting session and an eternal readjusting of your make-up and outfit (until you were finally ready). But now, you just couldn’t give more of a damn.

You don’t give a shit how they will perceive you because if they don’t like you the way you are, they certainly don’t deserve you. First dates are like picnics to you and if the two of you are not compatible, at least you’ve enjoyed the food.

2. You have different priorities

You will now always choose Netflix and chill before going on some crappy dates that you know you’ll be bored on. You choose to enjoy your own company before going on a date with someone whose personality is as boring and annoying as paying bills.

You’re totally over all of those hot guys you used to be interested in before because your perspective on them has significantly altered. In your eyes, hot guys are simply overrated and they are not worth a second of your time.

Players, narcissists, manipulators… You know in advance which lies they are going to sell to you and you’re simply bored with going through all of it again and again.

4. The good guys are not as good as they seem

And when it comes to good guys, they might seem good at first but when you dig deeper, they are actually far from it. They might be good at one thing and a total failure at other things.

And you’re certainly not interested in being with someone whose sexual skills are equal to a potato. They might shower you with gifts and attention but at the end of the day, you know that you will get bored of all of it. After all, you are looking for originality and not some lame copy-paster.

5. You have an aversion toward overly romantic things

Romantic comedies, constantly holding hands, excessive hugging and kissing are things that make you want to vomit again (and this time for other reasons). You’re just sick of all of these romantic gestures because in most cases, you know that one of the partners is not being genuine. So, you would rather hug your teddy bear than indulge in some mainstream romantic sessions.

6. People are no longer interested in your love life

They no longer ask you about your potential daters or your love life in general because they can probably see that you’re single and killing it. Your love life has become like some kind of a holy grail and they simply know that they shouldn’t bother you with some silly questions.

And if you had something to say, you would have told them a long time ago, so they don’t need to worry about your love life. The only thing they ‘need to worry about’ is that you aren’t overdoing having fun and having the time of your life.

7. You look at sex differently

You don’t need a man to fulfill your needs because you’re capable of doing it yourself. You’re enjoying exploring your body and every single day, you find some new spots and triggers that you didn’t know existed before.

You no longer look at sex as your need. It is something that you either choose to do or rather to not do (if your partner is not that good at satisfying your needs). And why would you waste your time on someone who is not capable of reciprocating?

8. Shaving is not something that you bother yourself with

Before, you would shave yourself twice or thrice a day if needed, only to make sure that you had that silky, smooth skin but today you couldn’t give a damn about it. If you don’t feel like shaving, you don’t shave.

It’s as simple as that. And even if you get into some action in the middle of which you realize you’re not shaved, you still don’t give a damn. You’re proud of your body the way it is and if they don’t like it, fuck them. 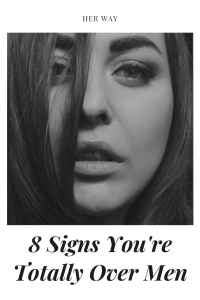 I'm Done With Boys' BS, I Want A Real Man