To all the men out there: A real woman is not someone who tolerates all of your bullshit and dances as you play. Period.

Real women know how to love unconditionally, but they also contradict you when you’re being wrong and drop you to the ground when you’re flying too high.

They have gone through a lot. They’ve learned to value and respect themselves and others who deserve the same treatment.

And they’ve also learned to let go of those they cannot change. Real women come with complications because they have standards and are not eager to tolerate any of your bullshit.

They have soft hearts, but they also have boundaries.

If you’re wondering whether you’re dating one, here are 8 signs you’re dating a real woman who deserves to be treated like a queen. (So, you better roll up your sleeves and start giving her the treatment she deserves).

1. She has high standards

A real woman isn’t satisfied with mediocrity because she was born for greatness. She has high standards because she doesn’t have time to deal with toxic people, liars, and manipulators. And if you don’t treat her right, she will most certainly not settle for less than she deserves.

2. She knows how to have fun (without you)

Yup. She doesn’t just sit and wait for you to propose something fun to do. If you haven’t planned something a week in advance, be sure that she already has other plans.

She will also make sure to fulfill her promise to herself that she will not tolerate any of your shit. She doesn’t wait. You’re either there or you’re not. There’s no grey area with her.

4. She is intolerant of your bullshit

If you have a valid reason for your behavior, she might consider giving you a second chance, but you need to know that she is intolerant of bullshit.

She knows what she’s bringing to the table, and she expects the same from you. If you’re not able to reciprocate, she will not be able to waste a second more on you. It’s as simple as that.

5. She doesn’t waste her time nagging you

Nagging is a word that doesn’t exist in her dictionary. A real woman believes only in the following words: self-respect, effort, reciprocity.

If she sees that you’re not making an effort to improve things and that she’s the only one trying, be sure that she won’t waste her time nagging you to change.

Confidence is her second nature. She’s confident enough to be her true self and humble enough to appreciate other people’s opinions. But, no amount of your bullshit will ever destroy her believing in herself.

She will contradict your beliefs, but she will be willing to hear you contradict hers as well because she knows that is the only way to self improvement.

7. She has goals and dreams

She fights for what she believes in, and she supports you and others around her to fight, too. And she’s always ready to help others because he has more priorities than just her own happiness.

8. She is open minded

She is open to trying new things, and she will inspire you to join her. She’s not someone who is willing to be stuck in the same routine, and that is why she will always be in pursuit of something new to experience with you.

A real woman is driven by her adventurous spirit. She is fierce and ready for challenges, and that’s one of the many reasons why she deserves to be treated like a queen. 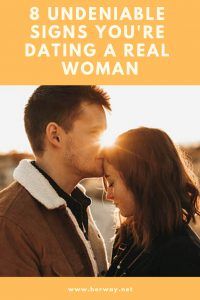