Here you are again, wondering if he is in love with you, wondering if you mean something to him and if you have a future together.

You wonder what his role will be in your life and if it is going to end up in heartbreak or if you will get the opportunity to live your happily ever after.

You can’t stop thinking about him and you wonder if you have finally met the man of your dreams who will be your loved husband and the father to your kids.

You imagine living with him and waking up every morning with him while your kids play around you.

Then, you figure out that you are just daydreaming and that you shouldn’t get attached to someone you barely know.

We all have doubts sometimes and it’s OK to double-check. To know your man is truly in love with you is one of the most sacred things there is in this world.

Just think about it: What woman wouldn’t like to know if she’s truly loved or not? 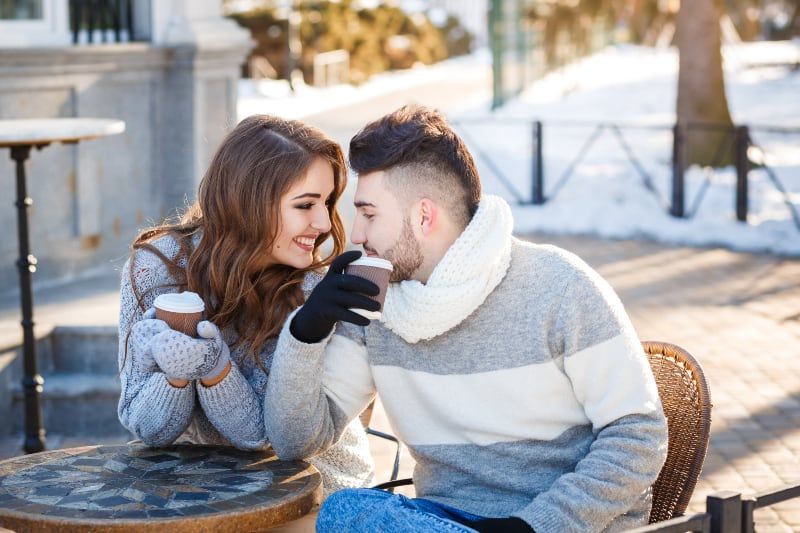 What woman wouldn’t like to know if she possesses the most sacred thing there is in this world—the true love of a man she adores?

Men are not as unpredictable as they would like to seem and sometimes, it’s easy to see what’s going on in their hearts without the need for them to speak their minds.

You don’t have to be a wizard to see how, but you do need to pay attention to some of the things he does and to the pattern of his behavior.

You can’t just rely on everything that comes out of his mouth but you also need to check his body language from time to time because it can reveal a lot about him.

That’s why we decided to mention some of the most common signs of true love from a man, so you don’t have to bother your pretty little head about it.

1. He is truly in love with you if he can’t hide his telltale body signs 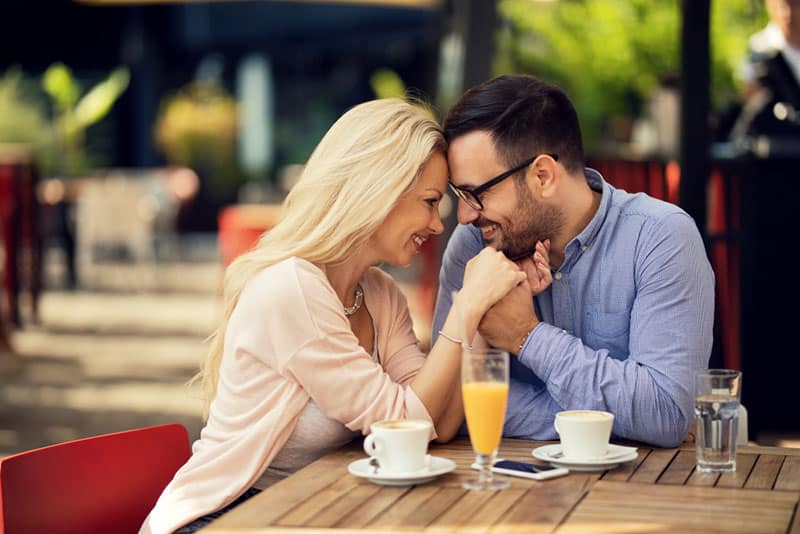 When he’s with you, he often gazes your way or has the constant need to touch you in a non-sexual way.

Smiling at you is something that is completely natural to him when he’s around you and, most importantly, you should pay attention to how he moves.

If he runs his hand through his hair often, if he rubs his hands when he’s around you or if he appears clumsy at times, it will reveal through his body signs that he’s into you.

Also, if he doesn’t know what to say so there is that awkward silence between the two of you or if he blushes because of that, he is definitely head over heels in love with you.

He really cares about your opinion and doesn’t want to act stupid in front of you. That explains all these body language signs that are fun to see.

2. He is truly in love with you if he shows his love publicly 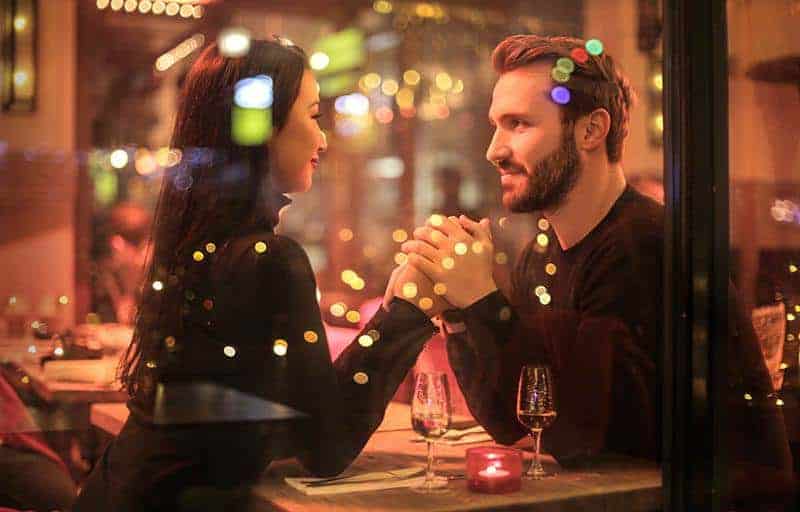 Also, it’s not strange for him to kiss you all of a sudden in a mall full of people or at a restaurant while you’re ordering food.

If he hugs you in front of your friends and family, if he’s close to you regardless of who you are surrounded by, it means he truly loves you and he has no intention of hiding it.

A man like this doesn’t care about what others will say. He wants to live his life to the fullest and if that means showing his love to the woman he is in love with publicly, he is going to do it.

If you were lucky to meet a man like this, cherish him because he is a real keeper.

3. He has introduced you to his friends and family 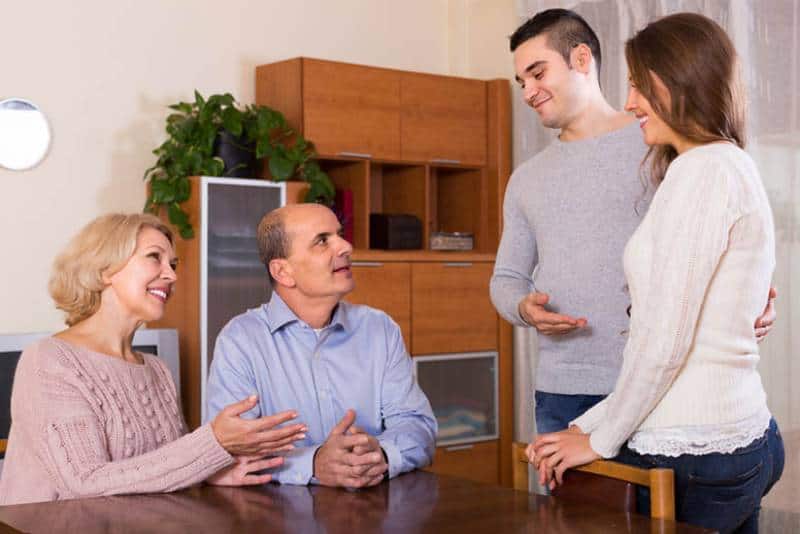 He wanted the whole world to know about the two of you so he let you into his world.

He introduced you to the most important people in his life and presented you as ‘The One’ to them.

It means that he has some serious plans with you and that he wants you to have a good relationship with all the people he loves.

And it’s not like just any woman gets a chance to meet the parents, I hope you know that.

Meeting his parents means you’re special and that should tell you how serious he is about you.

So you can expect him to pop the question soon and to make you the happiest woman alive.

4. He jokes around you all the time 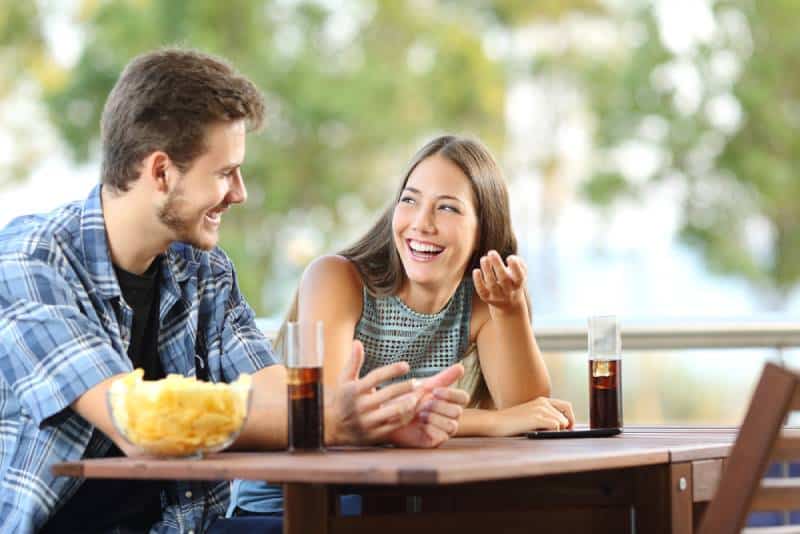 He’s not high or anything, he’s just in love (although love affects your brain in a similar way to drugs sometimes).

Maybe you could argue that he is high only if you accept the fact that you’re his only drug.

When a man falls in love, the sweetest sound to him will be hearing you laugh and that’s why he’ll be silly around you.

He’ll crack jokes all the time and he’ll go out of his way just to see you smile.

He knows that all girls fall for guys who have a sense of humor, so he continues to make you laugh even more.

You will see that he is trying more than any other guy before him because he badly wants to be with you.

If you see a guy doing this for you, there is no doubt that he has some strong feelings and no matter what he says about that, you can be sure that he is head over heels in love with you.

5. You catch his gaze turned toward you often 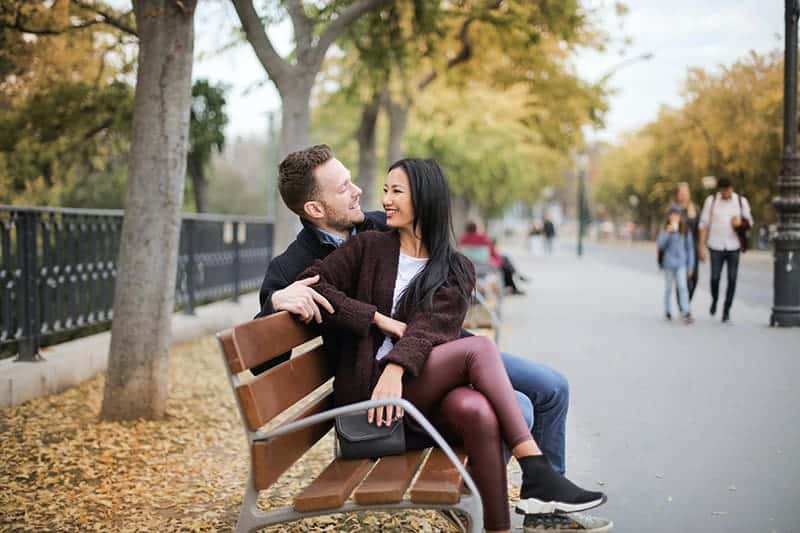 When you catch him looking at you, it’s something beyond describable.

He looks at you like you’re the most sacred thing there is in this world.

He finds you so beautiful and attractive that he can’t take his eyes off of you and he feels a little bit uncomfortable when you catch him staring.

When you catch his gaze, it’s like he is sending all his love toward you without speaking, without touching you. And you see that spectacle very often.

Bear in mind that only the one who likes you very much will do this since it takes a lot of courage for things like these.

6. He always has you on his mind 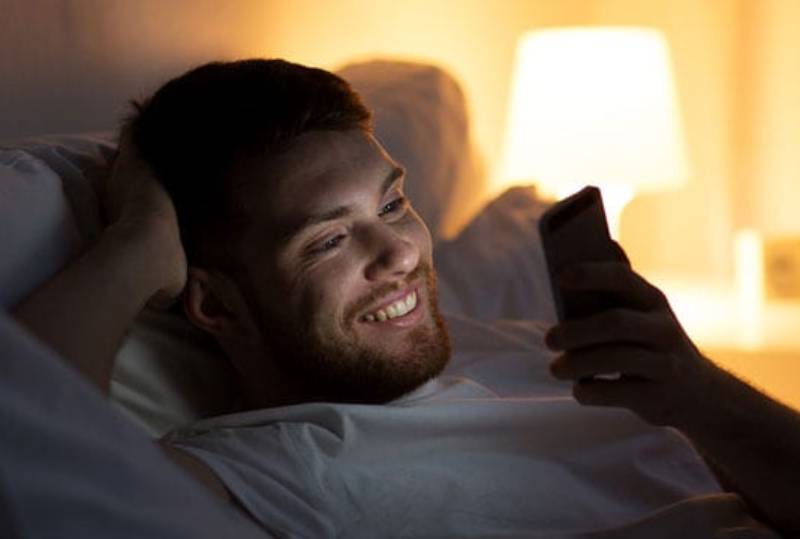 Before going for a ‘cold one’ with his friends, he’ll make sure you don’t have any plans for the two of you.

If he is thinking about some trip or a night out, he’ll double-check with you first.

Whatever decision he is about to make, you’re always there in the back of his mind, and he’s counting you in.

Whenever he is about to do something, he makes sure you won’t be affected by it in a bad way.

He doesn’t want to hurt you by choosing to go out with his friends instead of going out with you because he knows how he would feel if someone did that to him. How can you know if you’re on his mind?

It’s simple—he never intentionally hurts you in any way with any of his decisions.

A man like this is pretty rare, so make sure that you treat him just like he treats you and never let him go.

He is the type of man that is worth the wait and if you choose him, you will probably get all that you want because he appreciates women and he would do anything for the love of his life.

7. He surprises you occasionally 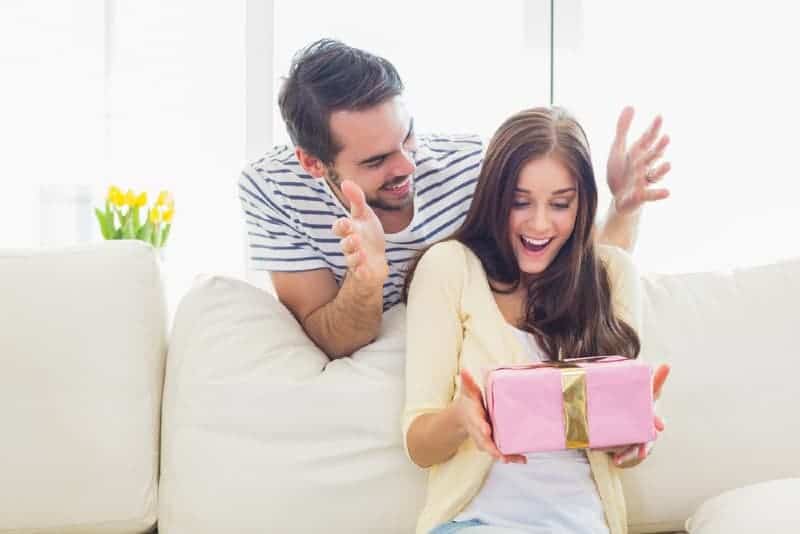 He likes to see you stunned by his actions, so he does everything there is in his power to sweep you off your feet as often as he can.

He throws you birthday parties, he never forgets your anniversary and he even buys you gifts without there being any occasion.

He pays attention to the little things, so if there is something you like and you’ve shared that with him, he’ll do everything he can to get it for you.

Picnics, late-night rides—all of a sudden they are some of the things he enjoys doing for you.

He knows you’re one of those people who just loves surprises and nothing is too much work if it will make you happy.

He also knows that small things matter the most and that most women will fall for things like these.

He would do everything for a woman he loves and this is just one of the signs of true love from a man.

8. He enjoys touching you 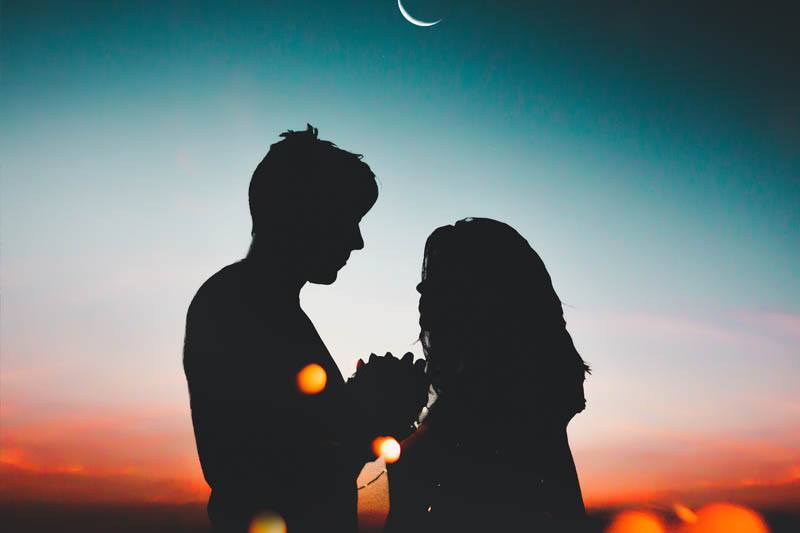 It’s just that whenever you’re close, he has this indescribable desire to touch you, to cup your elbow, to put his hand around your waist or just to kiss you on the forehead.

The surroundings are irrelevant. If he feels like doing it (and he usually does), he’ll just do it.

He wants to enjoy every second spent with you and doesn’t mind if people will look at you in a strange way. Screw others if they think it’s impolite.

It’s his way to say to the world you are his and he truly enjoys those small touches together with your hugs and kisses.

He is the type of man who truly loves and when he does that, he doesn’t need anyone’s approval.

He likes to touch you because in that way, he experiences a deeper bond between the two of you and that feeling makes it seem to him as if he’s on cloud nine.

So, don’t be too harsh on him if he constantly touches you—it is just a way to show you his great love and affection.

The ultimate one is:

9. He’d Give Up Anything Just To Be With You 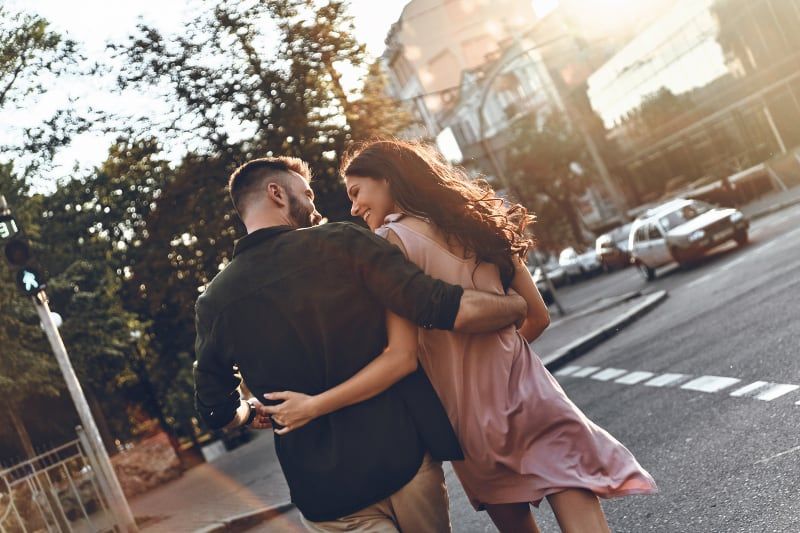 It’s irrelevant to him what is at stake. When it comes to his priority list, you’re always at the top.

There is no other thing that could pull him away from you. You are his choice from dusk to dawn and he makes sure you’re aware of it.

The rest of the world could stand on one side and he’d still pick the other side if you were standing there.

You are the one who fulfills him and who he sees as the future mother of his children.

He already imagines you being his wife and spending your whole life with him.

People say the moment you can see yourself married to someone and having children with that person, that’s the ultimate sign of true love. 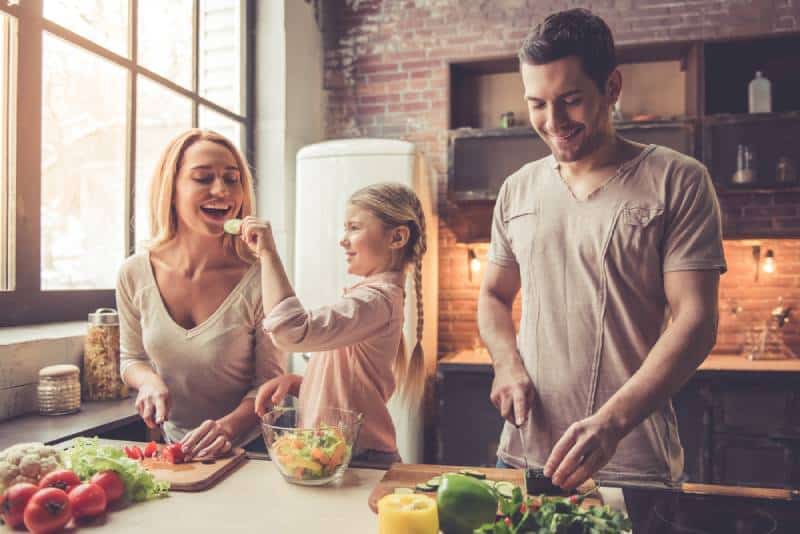 So, in case you had any doubts, it’s time to resolve them all now. No more questioning, no more doubts, no more overthinking. Let go of all your bad thoughts and enjoy the love your man has for you.

There is no need to panic or be afraid that something is going to end up badly just because it’s been good for so long.

It is time to forget all those bad love experiences because now is the time to enjoy a love that lasts.

It is time to move on from the past and to focus on the present and the future.

If you have already found a man who gives you all that you have been craving, stick to him because heaven itself sent him to you to show you what real love is all about.

You deserve a man who truly loves you, so I hope you recognized your partner in these little signs. 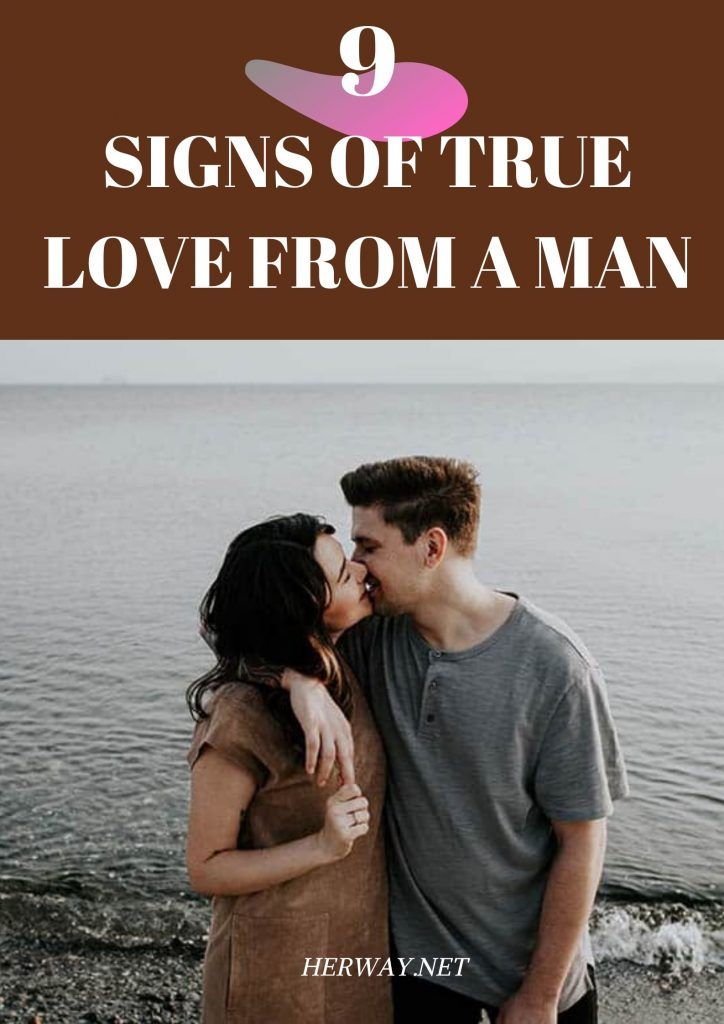 What Are The Signs Of Love In A Man? – QuestionCast