Some believe that when it comes to love, there is no grey zone. Either you’re in love or you’re not. There’s no room for anything in between.

But what happens when the one you’re in love with wants to spend time with you but doesn’t want to commit? He wants to be with you, but he doesn’t want a relationship? Why would he show interest and then bail on you?

I feel your frustration. It can be so confusing when someone is so attentive toward you, makes you feel so loved and then backs off and ghosts you for a while. It can be so challenging trying to decipher what could possibly possess a man to behave in such a cruel way.

Regardless of how much it kills you not knowing and trying to get to the bottom of his behavior, don’t waste your precious time and nerves on figuring out somebody who clearly has no idea what he wants and cannot appreciate a good thing, even when it’s standing right in front of him.

If you want the honest truth, here it is. Yeah, he likes you – just not enough to commit to you. And screw him for that!

This is why he always comes crawling back to you after you break up. Because he clearly loves your company, just not enough to make it a permanent commitment.

F*ck anyone who treats you like you’re not enough!

F*ck him for spending an amazing weekend with you and then refusing to take your calls for the entire following week.

F*ck him for telling you how amazing you are and then stringing you along for weeks on end.

F*ck him for sending a late-night text that he misses you so much but refusing to put a label on your relationship.

F*ck him for putting in zero effort, after assuring you he wants to be with you, but for real this time.

You’ve experienced enough lies and tricks from him to expect nothing more than empty words substantiated by occasional professions of affection, which usually translates to sex and a few scattered texts.

You’re better than a booty call, remember that, no matter how good of a lover he is or how smoothly he can talk you into forgiving him for the billionth time. Enough is enough. F*ck that.

The most important thing here is to know better than to take it personally. You should know by now that it most definitely isn’t you. It’s him. It’s not your fault that he can’t appreciate you for the amazing woman that you are.

Never change who you are for someone who won’t know how to appreciate you either way. Never change how you see yourself due to somebody not being able to see you in your full glory. And never let someone diminish your worth by treating you like you’re only what he makes of you.

I know you’re hurting right now. But the reason for that is not because you’re losing the guy who’s right for you because he’s not.

The reason you’re hurting is because your ego has been rocked by his inconsistent pattern of behavior. Don’t let that faze you too much. He’s not important enough to shatter your self-confidence.

This sucks, sure. But you can’t force people into feeling things that aren’t there. As brutal as it is to hear this, it’s true.

All you can do is cherish those who know your worth, and let go of anyone who make you feel less than.

You’re a smart, badass, sexy specimen of a human being. And no temporary man can prove you otherwise. Let that f*cker go, and make yourself available for when the right guy comes along. 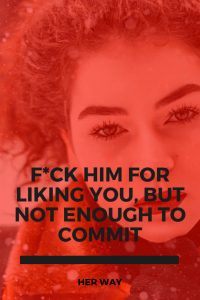