Love is a true miracle. You can never know whom you going to meet tomorrow or who is going to capture your heart and make you smile with the feeling of butterflies in your stomach.

Love can be uplifting, disappointing, unrequited or real. But, one thing is for sure. You can never choose the person with whom you’re going to fall in love with. It might be someone of your years, younger than you or rather, older than you.

And there’s absolutely nothing wrong with dating an older guy because every difference between the two of you has its charms. And it also has its ups and downs as well as any other relationship.

If you feel comfortable with dating an older guy, you should follow your intuition, and do whatever makes you happy.

I remember one girl who was really into an older guy and that was really surprising because all this time she had been saying that she’ll never be with someone who is much older than her.

But, it somehow magically happened that she fell in love with that guy, and at first, she didn’t want to admit it to herself because it would mean that she’s contradicting everything she’s been claiming all this time.

So, she forced herself to ignore him from time to time, and she was constantly sending him mixed signals. And the guy, of course, couldn’t follow her anymore, and he decided to give up on her.

Sadly, till this day, this girl is still grieving for the lost chance and perhaps the love of her life just because she was too stubborn to reject the prejudice of being with an older guy. If you’re having similar doubts regarding an older guy you really like, learn from this girl’s mistake.

Don’t let yourself lose the opportunity to be happy just because you’ve imagined that you should be with someone who is younger.

Catherine Zeta-Jones and Demi Moore are perfect examples of this. They could have had partners ten times younger if they had wanted to, but they don’t give a fuck what others will think of them. And that is how you should behave, too. You should never force yourself to quit on something that makes you happy.

So, when you decide that you want to date an older guy, you should know that it will be a unique experience in itself, and you should also pay attention to the following 8 things that you need to be prepared for.

The first thing you need to be prepared for is his children (if he has any), and chances are that most of them will have had children before you came along. With this, his priorities might drastically change sometimes.

He might shower you with love and affection, but he will always have in his mind that his children need the same amount of affection he’s giving to you. Sometimes his children will steal him from you when you need him most, and there’s nothing you can do about it. You can either be comfortable with it or you can be out of it, but there’s no gray area here.

Another issue that is also important is your potential children. Have you thought about having children with him? Do you think that he would want to have more children? Is he capable of becoming a father again? You need to understand that your vision of your potential motherhood will be greatly influenced by your older partner. And if you’re perfectly satisfied with his perspective on this, there’s no need to worry.

An older guy has obviously more life experience than you in most aspects. And that is why they already have a settled, firm life perspective which is almost impossible to be altered. What if you don’t accept that perspective?

Changing means replacing his life perspective with your own, and doing this is a dangerous thing. He might get mad and disappointed in you even though your intentions are utterly good. Always learn as much as possible about an older guy before you enter into any kind of relationship with him because this will save you nerves and time.

Once you know what you’re entering, it will be easier to adapt and maintain your relationship. You need to let his life perspective be your compass that will teach you a lot about life facts you haven’t learned yet.

If you decide to date an older guy, you need to be aware of the fact that your preferences may collide with his. He might be into some old Netflix series, while you’re into some new and modern ones.

It is of utmost importance to be flexible in a situation like this because your older guy will not be that comfortable with giving up things he’s been practicing long before you entered his life.

When it comes to going to the movies, it will be almost impossible to pick something both of you like except when the two of you have similar tastes regarding movie genres. And sometimes you will have to accept that your guy has gone somewhere without you just because he knows you’re not into something he prefers.

In that situation, you need to stay calm and not take it to heart because he’s subtly trying to tell you that he understands and respects that the two of you have different tastes in different things. You need to be ready to compromise and respect his preferences just as he’ll respect yours.

We all know that the older you are, the higher the risks that you’re going to get health problems. Your guy might be in perfect condition at the time you met him, but this doesn’t mean that things will not eventually change.

As your guy gets older, he will need to take special care of himself in order to prevent potential health problems. But, there are some inevitable health issues that strike people at a certain age, and there’s nothing you can do about it except accept it.

His health will influence your well being as well, and you need to be ready for the sleepless nights that are awaiting you and to be there for him when he needs you. Sometimes his health will prevent you from enjoying things you thought he’ll be capable of enjoying.

But, if you’re really into him and you’re ready to face any kind of an obstacle regarding his potential health problems, you’ll be just fine. You just need to be prepared for what is about to come in order to stay collected and avoid panicking or even worse, regretting dating him in the first place.

You need to be aware of the fact that your older guy might have a lower sex drive. Sometimes this can be a real issue if you’re a woman of action (if you know what I mean). But, there are also some benefits regarding his sexuality, and that is experience.

While younger guys have higher sex drives, your older guy will have more experience which automatically makes him great in bed. He will know how to satisfy your every need, and you will not have to tell him what he’s supposed to do in order for you to reach a climax.

As you can see, there are always some pros and cons, and if you can accept them, you’ll be more than happy in the upcoming days spent with him. Also, you need to understand that you can’t blame him if he simply doesn’t want to have sex as often as you prefer because it’s something he can’t really influence.

Although, his desire for sex might also change through time, and the only thing you need to do is to stay patient and enjoy as much as you can in the grip of an experienced older guy who will show you the essence of sex.

Another thing that you should pay attention to is his habits. We all have our unique habits that we’ve acquired during the years, and once you acquire something for life, it is hard to get rid of it.

Your older guy will probably have some weird habits like storing certain things in a certain way or eating something in a certain way and so on. You need to understand that his habits are a part of his routine, and changing them will be equal to impossible.

Compromising will require a lot of effort, and if the two of you succeed in it, there will still be this feeling of dissatisfaction because all of a sudden, both of you need to change your routines and give up on something you’ve been doing this whole time.

The best solution is to accept him for who he is and expect the same from him because if you keep on insisting that he changes, you will make things only worse, and his habits will remain the same.

While you might be expecting him to go on a trip somewhere, he might be thinking of giving that money to his children or something else that is of a higher priority to him. He will not do any of it on purpose, but his mindset will tell him that it is simply the right thing to do.

For example, you cannot expect him to spend his money on something luxurious when his wish is to put the money into a pension and safeguard his future. His financial commitments will vary from day to day, and you need to be ready to compromise.

8. His will to enjoy new things

Dating an older guy most often means saying goodbye to those spontaneous trips that you used to enjoy before. You need to know that your guy has probably experienced almost everything that is there to experience, and his will to enjoy new things will slowly decrease by time.

You cannot expect that he will be all joyful about some new hobby or sport that you’ve just discovered. While it may seem interesting to you, his interest will most probably not follow yours.

The age difference is the main culprit of this, but it doesn’t have to be so if you’re more of a vintage type of a person. His job, his children and all of the other things that are parts of his life will take a lot of his time, and his will to enjoy new things and be casual will be changed significantly.

He will no longer find himself suitable to go partying all night because his attention will be directed to something else most of the time. But, if you’re okay with that type of lifestyle, I’m sure you’ll be having the time of your life with your older guy. 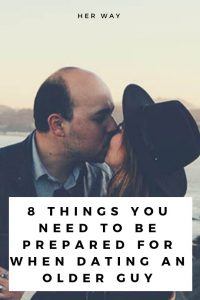