“He loves me. He loves me not…” If you’ve ever found yourself pulling the petals of the imaginary flower while wondering about whether he’s really in love with you or not, I totally understand.

Deciphering what is going on in a man’s head has become more like deciphering quantum physics (and I’m not even exaggerating). It took me some time to realize that the famous saying “Men are from Mars, women are from Venus” actually rings true.

After a few failed romances, I’ve realized this: Women are great at overthinking, men are great at not knowing how to express their feelings. (I think this is a great alternative to the Mars-Venus hypothesis.)

So, the main reason why women overthink things and act confused when it comes to romances is that men are not that good at expressing their feelings or knowing what exactly they want at the moment.

But, when a man falls in love (assuming he’s not a commitment-phobe), you will SURELY know it because everything feels different then. There are some not-so-obvious things a man does if he’s madly in love with you and that’s what you need to pay attention to!

(To eliminate any suspicion, we’ll also check if the fear of falling in love with you is preventing him from ‘entering romance’ and expressing his feelings for you.)

Contents show
1 Is he madly in love with you (but afraid of his DEEP feelings for you)?
2 This is how you know for sure that he’s MADLY in love with you:
3 If he does these things, then you know he’s totally SMITTEN with you!

Is he madly in love with you (but afraid of his DEEP feelings for you)? 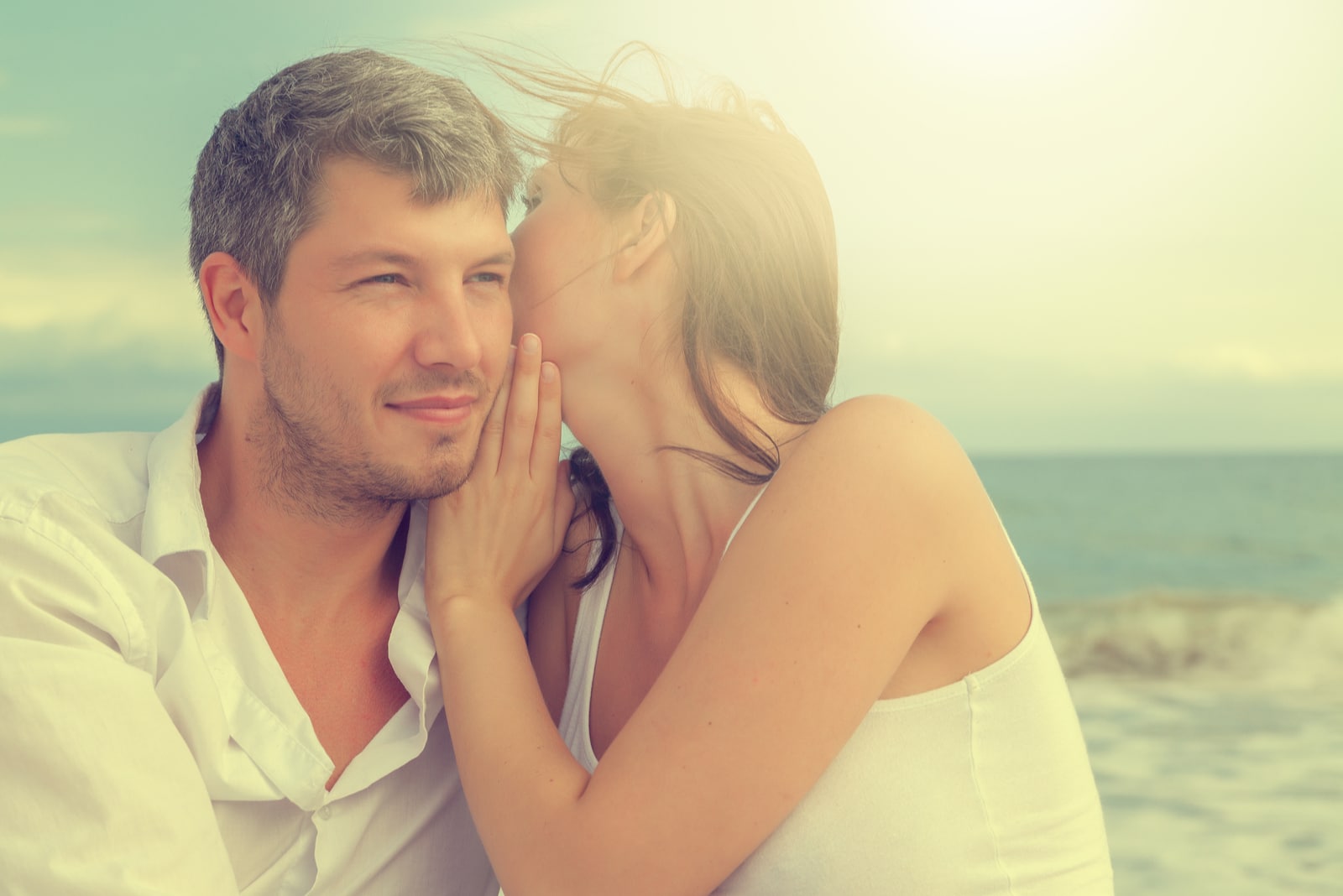 You probably already know the drill. You’re sitting next to your cell phone, waiting for him to text you back, but still, nothing happens.

Days and even weeks have passed, and right then, when you say to yourself that you will no longer wait, he comes back with some convincing excuse (or whatever) making you even more confused.

You give him a second chance thinking that things will be different from now on, but after some time, he repeats the same procedure (or should I say mistake).

It’s evident that he’s giving you mixed signals because he himself has no idea what he’s doing. One day, he showers you with the ultimate affection worthy of poetic love, and the next day, his affection shuts down and vanishes into thin air.

One of the main reasons why a man would do such a thing is because he’s afraid of his feelings for you. Besides just being men, there are many other underlying causes and factors that influence this, and it’s not that simple.

Next time you find yourself in the same or similar situation, pay attention to some of the most important signs he’s afraid to fall for you :

• Sending you a wide array of mixed signals

• Wanting to keep things light for as long as he can

• Yet, still, he’s always there when you need him

• Having difficulties opening up to you

• Thinking he doesn’t deserve you

• His past romances scarred him

• If some or all of the above things resonate with your situation, then you know he’s totally in love with you, but (for some reason) he’s afraid of showing it to you.

This is how you know for sure that he’s MADLY in love with you: 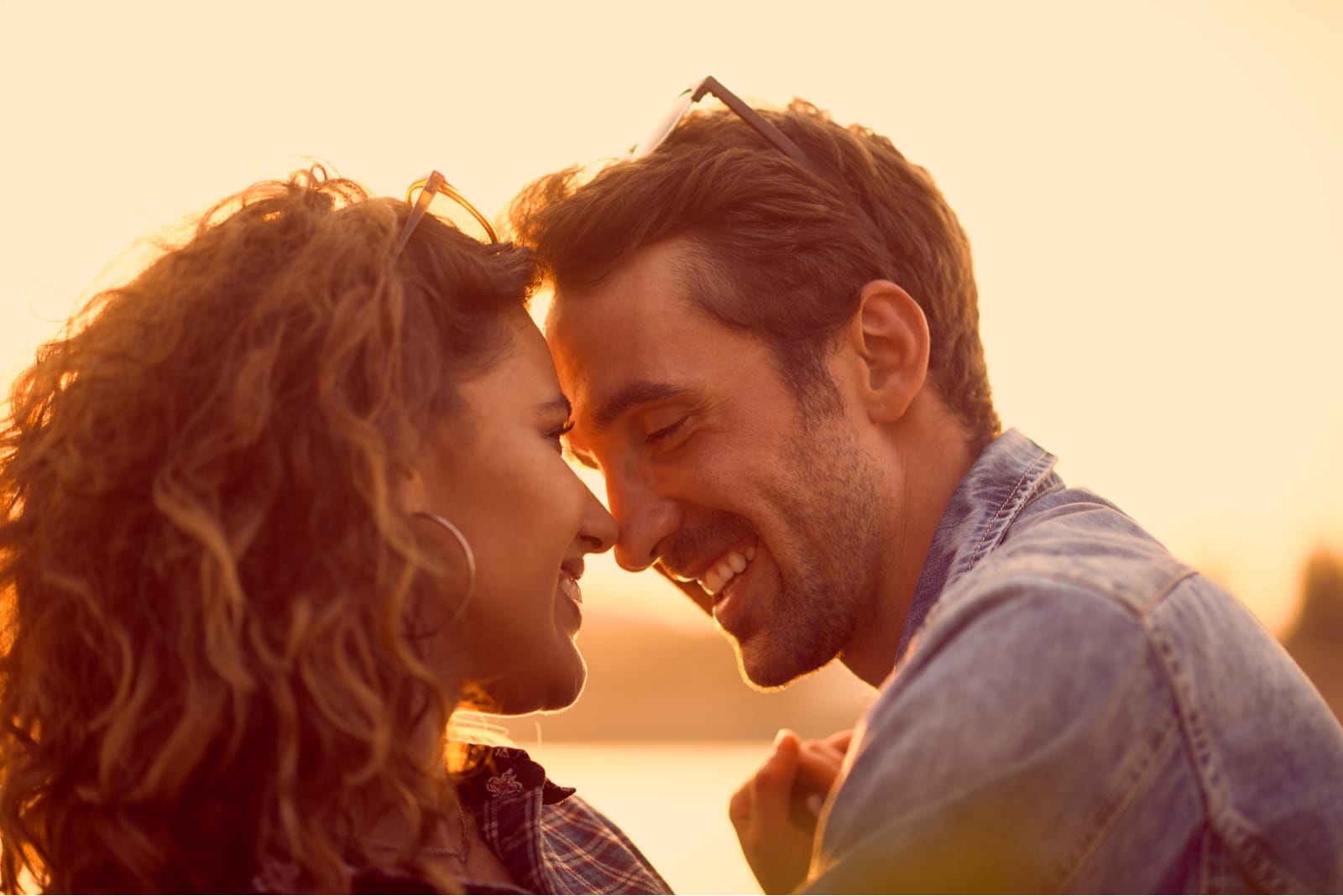 Let’s say that your guy doesn’t have a problem expressing his feelings, and he’s not afraid of falling in love with you. It sounds like a dreamland, right?

The thing is, we women have gotten used to dealing with complicated situations where even when everything is alright, we still think that there must be something wrong.

We still keep looking for flaws in our romance because we’re convinced that things can’t be that good and that simple.

But, what if I say to you that half of your romances are being killed by your overthinking? Sometimes (and I really mean sometimes), things are very simple indeed.

When a man falls in love with you (assuming he doesn’t have problems committing), his MAIN GOAL is to show it to you with his words and actions!

When a man is in love with you, he doesn’t play games, he doesn’t lie to you, and he doesn’t let you wait. Instead, he uses every opportunity to show you how much he cares about you.

He makes an effort, he spoils you with all those sweet romantic gestures, and he never makes you question his affection for you.

When a man is in love with you, he doesn’t make excuses. Instead, he steps up his game and decides to become the best version of himself.

When a man falls in love, he does everything in his power to win you and make you stay in his life.

That’s the only truth. When you wake up in the morning, read his romantic text message and think to yourself: “ This couldn’t be real.” But, know that it is real and it’s happening. It’s happening because he loves you! 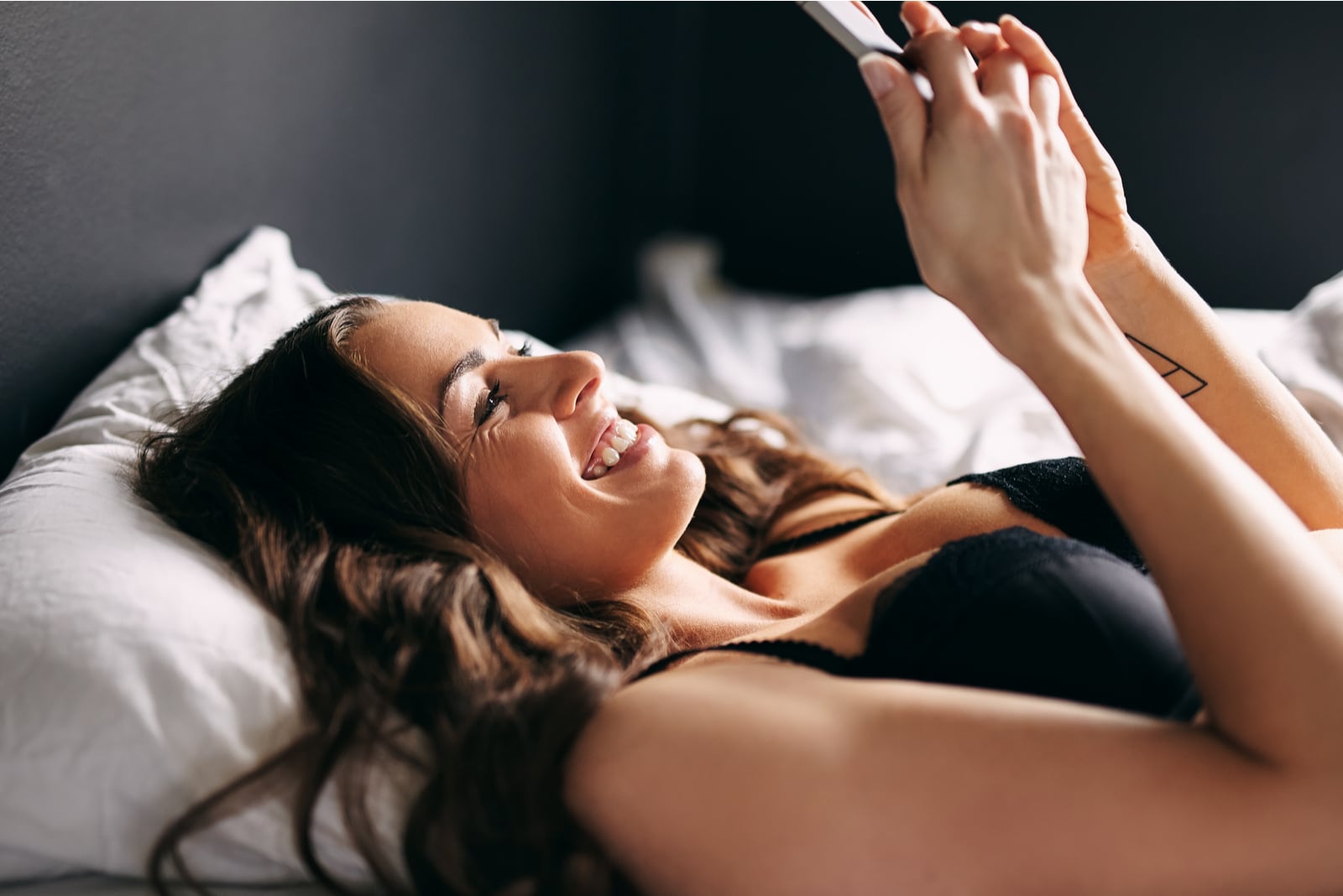 That’s how you know that he’s MADLY in love with you.

If you need more proof that his love for you is real, then here’s how a man acts when he’s falling in love with you:

• His kisses tell you more about his affection than his words

• He texts you MORE often

If he does these things, then you know he’s totally SMITTEN with you! 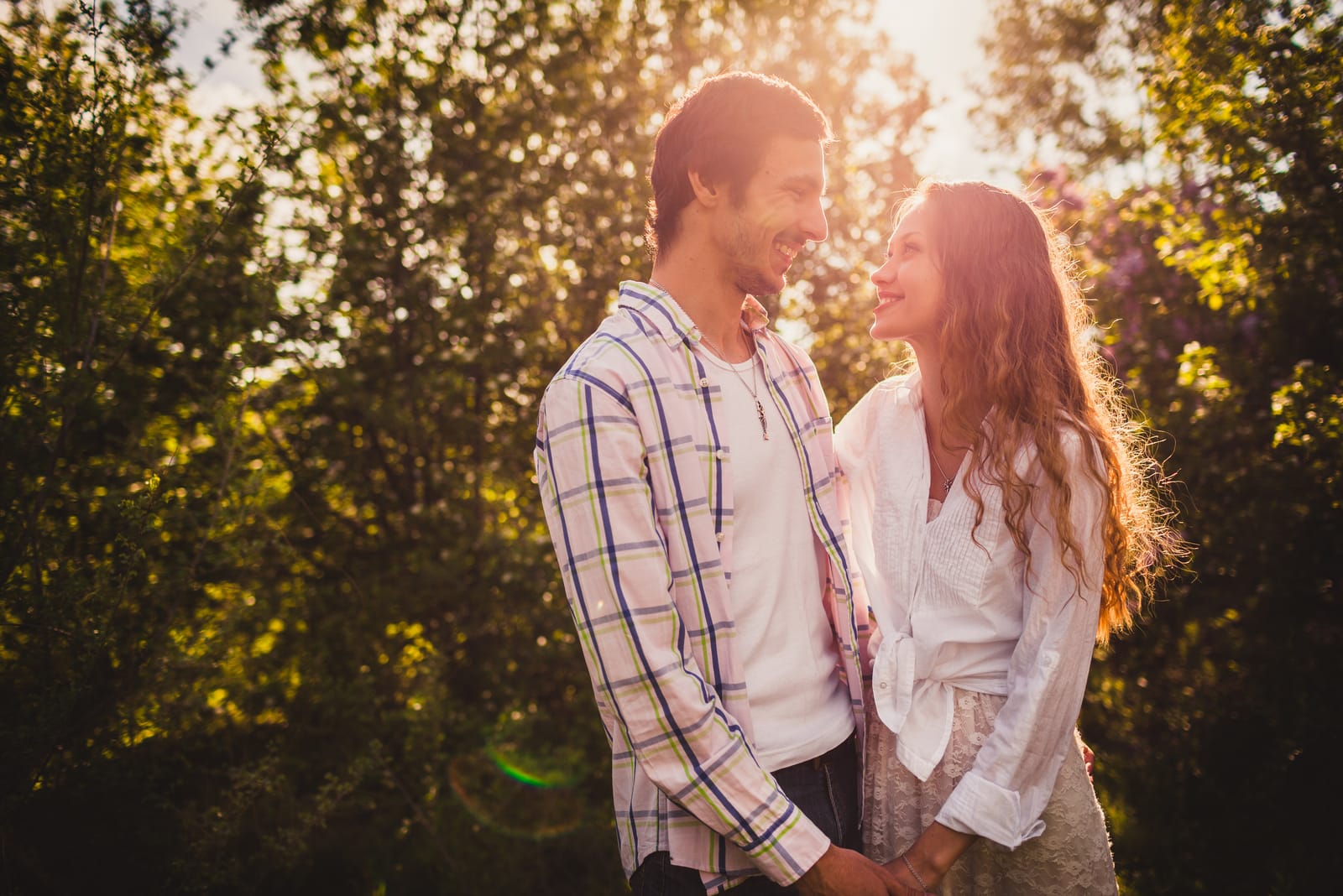 I used to think that by only observing his texting habits, I could tell whether he was into me or not. I’ll just say that this is partially true.

There are many things men do when they want to shower you with affection, and instead of decoding every single one of them, you need to look at the bigger picture!

The truth is, men are not that good at expressing their feelings like women are, but if you notice the significant changes in the amount of his effort, then you know he’s totally smitten with you.

You’ll notice this ‘effort improvement’ in every single aspect of his behavior.

He will not only text you more often and make his texts more interesting by spicing them up with emojis, but he will make sure to introduce you to his friends (and maybe family), make future plans with you, and brighten your day with all those little things that show he really cares about you.

It’s really difficult to draw conclusions from only one pattern of his behavior (like frequent texting). That’s why you need to expand your views and pay attention to other aspects as well.

I’ve learned the hard way that the worst thing a woman could do is make excuses for a man. For example, when he lets you wait for him to show up on a date, then informs you that he won’t even come, you think to yourself: Yes, he’s probably busy at the moment and that’s why he forgot about me.

Guess what? This shouldn’t happen. It’s not normal for a man to forget about a date with a woman whom he’s supposed to court, make her feel special, and show her that he’s worthy of being with her!

Don’t get me wrong. It’s okay if such a thing happens once, but if it happens on a regular basis, then making excuses for his behavior will only make things worse.

What I’m trying to say is that if a man is TOTALLY ready to win you and he’s FALLING IN LOVE with you, he will do everything in his power to show it and prove it to you.

That’s how you know that he’s madly in love with you.