I always thought you were mine. I thought that you don’t want to be anybody else’s but mine. I had the feeling that you loved me and that you were actually giving me all I needed to be happy. In fact, I considered myself lucky to have someone like you in my life.

What I didn’t see was that you didn’t give me half the love I deserved. You didn’t give me the amount of love I gave to you. I had that strange feeling that something was not right, but I thought it was something that happens to all couples.

I was so blinded with your sweet words, your games, and your actions that made me believe you were only mine. But the harsh truth was that you were everybody’s but mine. You gave your time and your love to women who didn’t deserve it.

You gave it so easily to everyone, but you never gave it to me. Even though I was the only one who loved you with all my heart, I never got what I had been dreaming of.

I never got that vintage kind of love. I never got the feeling that you loved me and that I was the most important person in your life.

I always had to find your love and attention. I had to chase you if I wanted you to be with me. But you liked that game since it was a giant ego boost for you.

You enjoyed every time I was losing my mind because you were sitting with another woman and watching her like you used to watch me. In moments like that, I felt like my whole world was falling apart, but you didn’t give a damn about that.

It was satisfying for you, and you kept breaking my heart step-by-step. You wanted to see what my boundaries were and if I will choose myself in the end or I will crawl back to you.

You loved to play with me, with my emotions, with my common sense. You would drive me crazy, and you would later accuse me of being a drama queen.

You could never understand why I acted like that. You could never see how much I loved you. To be honest, you didn’t want to even try.
That is how little you loved me.

While I was trying to save what we had, you gave yourself to every woman you bumped into that day. Everyone was better than me. Everyone was prettier, smarter, and funnier.

You know what? I was the beautiful one, the smart one, and the fun one in the past.

But you know what I turned into after you broke me?
I turned into a woman who doesn’t feel like dressing up and looking good because even if I did that, I wasn’t beautiful enough for you.

Because of you, I didn’t engage in conversations anymore, so people would think that I don’t know anything about your ‘affairs’ and that was the reason I didn’t not say anything.

Because of you, I stopped being the fun girl since you took all my positive energy away and left me to wonder if I was good enough. I became a living corpse. I would spend the whole day analyzing why we aren’t working out and how I can improve so you would like me more.

What I couldn’t see was that I was all you ever wanted, but you were too scared that I would be the dominant one in our relationship. You saw that I can make all my dreams come true, and you were so terrified that you wouldn’t achieve your goals and that I will be better than you.

You were a coward who kept hurting me but not letting me go. And that is what you are now as well. You are still a piece of shit, but I decided I will be happy.

I missed you, I admit. But it happened only until I realized that you were never mine. You were there with me physically, but you weren’t there in spirit.

All that you gave me wasn’t because you loved me. You did it to make me stay. In the end, you needed something you could name as a reason when I would say that I was leaving you.

And every time I planned to leave and start a new life, you would come and tell me that you would be lost without me, that I am the only light at the end of your tunnel, and that your life won’t have any purpose without me.

So, I decided to give you a second chance. And a third. And a fourth. But then I realized that you were not even trying to make me stay. You would try for only one day, and the next one you would continue as you wanted.

I still remember the sleepless nights I spent, thinking about you while you were probably in another woman’s bed. It took me so long, but in the end, I realized that I couldn’t miss someone who was never mine—at least not completely.

Now, when I think about you, I tell myself that you were just a lesson I had to learn. Sadly, in a tough way. But because of you, I will never let a man treat me like you did.

Because of you, my heart is broken to pieces so small that they can’t be glued back together.

Because of you – I fell.

But because of myself – I will rise. 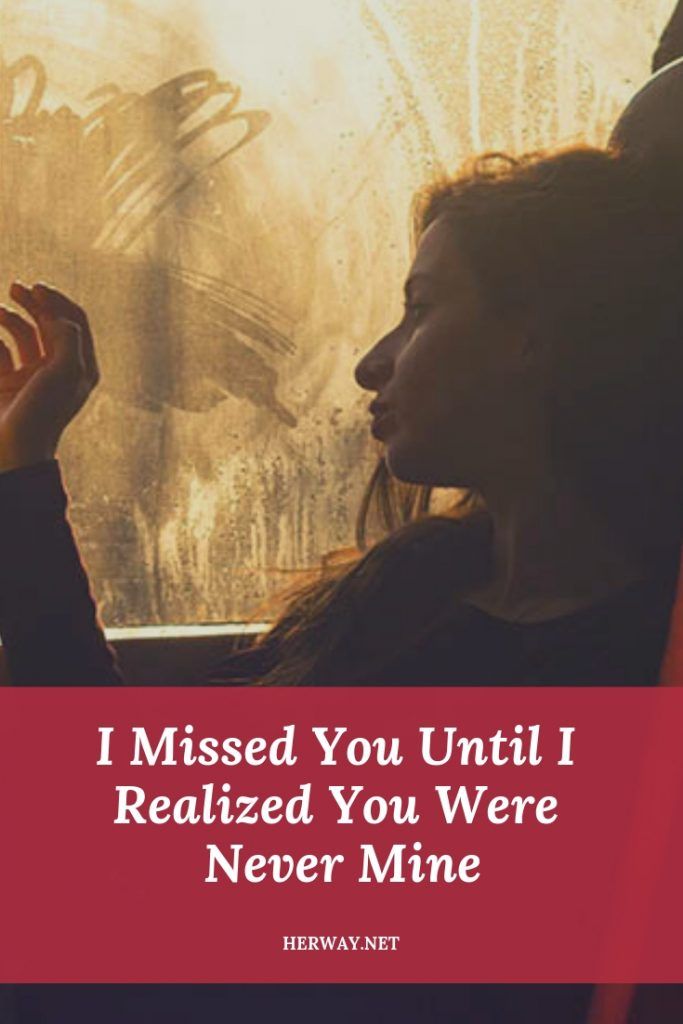 160+ Emotional I Miss You Quotes For Him And Her

[…] when I finally realized that he would never be mine, this realization hit me and it brought me back to […]