Life’s too hard when you’re alone.

You can lie to yourself and to others that you’re better off single than in a relationship but truth be told, that is only accurate when it comes to choosing between being single and being in a crappy relationship.

If the choice was different, if you were to choose between being in a happy relationship and single, which would you choose?

I want all of that. I want someone to help me get up when life kicks me to the ground. I need someone to tell me I’m good enough when I lose my self-esteem.

I want love but I don’t want heartbreak.

It is so hard to keep giving second chances and keep getting your heart broken every single time.

How can you break the walls around you and let someone in when you almost positively know you’ll end up hurting more than before?

I’m done making myself believe a guy wants me just because he said so. I’m done proving to myself that someone cares for me.

I’m done constantly being on the fence between thinking ‘he likes me, he likes me not!’

I want a guy who actually gives a fuck about me!

He’ll show me he loves me.

Words don’t mean shit. I can’t even tell you how many times I’ve sat down and listened to crazy promises and meaningless words.

How many times I have wanted to leave and he would get me back with a few clichéd lines, a few re-creations of romantic movies.

That used to work but not anymore. As I’ve said already, I don’t want to make myself believe he loves me.

I don’t want to latch on to one thing he said that seemed positive and hopeful and hold on to it, hardly believing it’s true.

He will start the car and warm it up before I do. He will make me dinner because he knows I’ve been working hard the whole day.

He will pop up at my work unannounced to take me to lunch just because he loves me.

He will talk me up because he’s proud of me. He won’t lie about me or try to convince people I’m that great just because he’ll look good.

He’ll genuinely believe I can do whatever I want and that I’m capable enough to pursue my dreams.

He’ll walk by my side proudly. He’ll be the man walking next to an independent woman. He’ll be my support, I’ll be his.

He’ll spend time with me but he’ll know when to give me some space.

He won’t act like he owns me. He won’t force me to live his life. He’ll encourage me to have a life of my own, he’ll support my independence. But still, he will spend time with me.

But when he sees that I need some time alone, he’ll give it to me. He won’t question our relationship and he won’t feel threatened.

He’ll know that I need to sort myself out and he’ll leave me to do so. He knows I won’t bother him when I can handle it myself. And he knows that any time I need his help, I will ask for it.

That’s what a man who really cares about you does. Unlike those who automatically think that you don’t love them and you’ve found someone else the second you want some time alone.

When he’s not around me, he won’t forget that I exist.

He’ll be with me even when he’s not. Because that is what true love is. You love someone equally when they are not there.

When we fight, he’ll leave me to cool off.

He’ll give me my space but he’ll never leave my side. Even if he’s angry with me, he’ll be there for me. He won’t be insulted about something I’ve done.

He won’t look at our fight as something that can’t be fixed. Even if he’s right and I’m wrong, he’ll reach out to me and try to make things better.

He won’t sulk and be silent for days because he’ll love me and he’ll care about my feelings, unlike every other man I’ve dated.

He’ll inspire me to be the best I could ever be.

He won’t tend to my every need because he won’t have to but he’ll challenge me and try to make me a better person every day.

Our future will be a happy one because we are meant to be with each other. We are fair to each other and we respect each other.

The guy I want will give a fuck about me because all those who don’t are no longer an option. I’m not settling for less than I deserve. Not anymore. 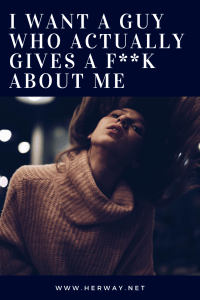