I won’t be the one who will tell you that it is wrong to stay with a sex addict and try to solve the problems. I also won’t try to open your eyes and show you what you are missing while he is leading you on. I won’t because you already know that—just like I knew it while I was living with a man like that.

I just want to tell you my story so you could see that you are not alone and that no matter how you feel now, things can get better. They have to—if you care, of course.

I was married to a sex addict and every day of my life with him, I felt like I was not enough. No matter how many things I would do to please him, it was never enough. He was constantly trying to find another way to have fun.

I thought that he will change because of me and our kids.

But he couldn’t even make an effort for us.

At first I stayed because I thought that it is not that serious and that he will change, but he refused to do that. He said that he needs sex as much as he needs air in his lungs. And every time he would say that, he would break my heart because I wasn’t the woman who could satisfy all his needs.

He didn’t care if he was hurting me and breaking my heart.

He told me that if I am not going to provide him with what he needs, he will find it in different place. I felt like crap, like I was not good enough and like I was not worthy.

Then I realized that the point of love is not to feel like crap.

When you are in love, you will do everything to make your partner feel good. You won’t hurt her and ask her to act like a slut just to satisfy your sick needs.

When you are in love you don’t fuck hard, but you make love. Because making love is full of feelings that make you feel special and getting fucked can’t provide you with that.

You see, you can have sex with anyone but you can make love only with the loved one. And there is a huge difference.

Too bad that love wasn’t the main priority for my ex.

He just wanted to get laid to feel better. He didn’t choose—he would hit on other girls in front of me while I was sitting in front of him looking at him and asking why he was doing all that to me. And every time I wanted my voice to be heard, he would manipulate me by saying that it was all in my head and that he loves me.

And again, I would fall into his net of lies, thinking that I was overreacting.

So I would keep living my shitty life with a shitty husband who didn’t know how to keep his dick inside his pants. He was a serious sex addict, but he never wanted to admit that. And all my conversations with him about getting help were in vain because he couldn’t and didn’t want to get rid of the most important thing in his life.

All the signs of his infidelity were screaming around me, but somehow, I refused to see them. Maybe they can help you to get away in time and to avoid the pain I went through. 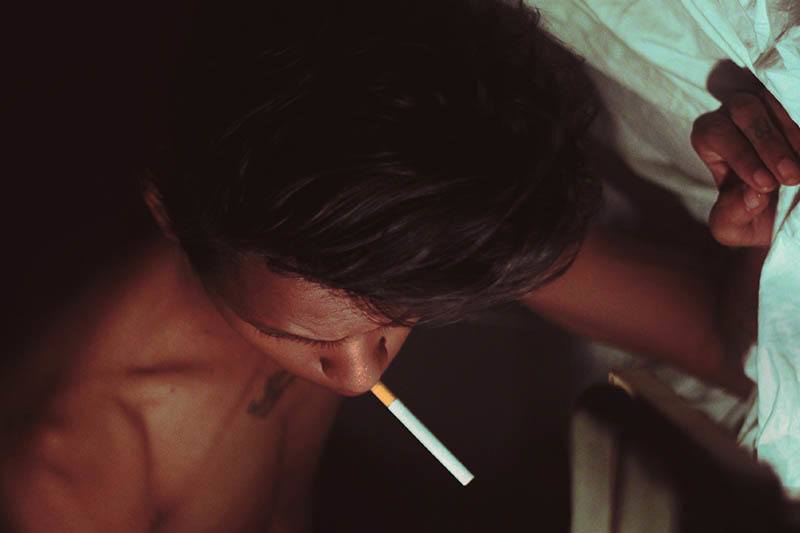 1. He was hiding his phone

Whenever I wanted to take his phone to see the time or something, he would jump from the other part of the house to tell me the answer by himself. He was so sensitive about me touching his personal stuff.

2. He was never logged in to any of his accounts

We had a shared PC.All my accounts were free but he would always log off his accounts even if he only went to the toilet. I just can imagine what kind of filthy stuff he had there.

3. He couldn’t explain the lack of money

We were spending more money than usual, but we didn’t have all the things that we needed. And every time I would ask him about money, he would say that we spent it but that we forget where and I shouldn’t make a fuss about that.

The worst thing was having sex with him and thinking that I gave 100% of myself to please him and while having the blessed smile on my face, trying to cuddle with him, he would already start beating off in bed next to me.

5. He was lying all the time

Whenever he would say that he was somewhere, I knew that he was lying to me and that he was probably with another woman in bed. He would come home smelling like booze and cheap women’s perfume, and drunk and smelly like that, he would want to have sex with me.

6. He always wanted to be the dominant one in bed

I must admit that he was a really good-looking man, but that wasn’t enough. He always had to be the dominant one in bed because that was turning him on. His sex craziness and even higher sex drive transformed him into a sex addict and he couldn’t even do anything to prevent that.

7. He was flirting with everyone

I couldn’t go to anywhere with him and feel good in my own skin. He would ruin every night out, every date and every friends’ gathering. He was hitting on my best friend while I wasn’t there and basically on every woman who was close to him.

The worst thing he did to me was that he tried to convince me that I am just overreacting and that it is all in my head. But I wasn’t crazy. I knew what I saw. I knew him better than any person in his life and I could see when he was lying.

9. He made me feel uncomfortable in bed

Whenever I was in bed with him, it was like I was in a competition. I didn’t get to enjoy myself, but he made me feel like I had to go the extra mile to make him feel good.

Every time we would finish, I would feel like a piece of shit because of his ugly comments—telling me that I should do some things better kept echoing in my head and because of that I lost my self-esteem.

10. He was always treating me with suspicion

He was the one who cheated, the one who couldn’t get rid of his addiction, but he blamed me for everything. Just because he was in his ‘sex world’, he thought that I was cheating on him and that I have many men in my life besides him.

And whatever I would say, he wouldn’t change his mind and kept torturing me by telling me that I was just a slut and that I am not a good example for our kids. He wanted to put all the blame on me and no matter what I would say, I was never right to him.

Those are just some of the things my ex did to me and the rest is something that I am trying to forget. His bad behavior toward me left me with low self-esteem, asking myself if I am good enough and if I will ever attract a man who will truly love and respect me.

Even though we are not together anymore, he still has an impact on me. Every time I meet a new man, I am trying to find red flags that he might be sex addict as well. And that’s why every new relationship ends sooner than it actually begins.

At times, I think that I should have done something to get away from him before. Yet, that is the easiest thing is to say. In reality, it takes a lot of courage to do—to leave him, especially if you are financially dependent on him.

On the other hand, I didn’t want my kids to go through all that mockery of their dad being represented in that way. I just know that I put up with his crap for a long time, but I finally decided to break free from him and stop living in a hell he made just for me.

Now, after so many years, I have been able to regain my self-esteem and to be the old me again. Now, I can see that the problem was with him and that I didn’t want to see that. In fact, I was defending him for some reason. Maybe it was easier for me to neglect all my problems than to confront them. But I did and that was the best decision of my life.

Now I am a happy woman and he is the same piece of shit. I guess some things never change!