The media has definitely raised the bar when it comes to romantic gestures, so we don’t even expect men to make those grand romantic gestures, like rebuilding the house where you made love for the first time (like Noah did for Allie in the The Notebook) or screaming ‘I love you’ from the biggest skyscraper.

We’re satisfied when they show up on time, don’t forget to say ‘Happy Birthday’ or text back without making excuses. But this shouldn’t be so.

While you shouldn’t expect them to make those grand romantic gestures, you also shouldn’t be satisfied with them not making an effort because real men don’t just speak; they act. And only a real man would make these 8 romantic gestures because he actually gives a damn about you, he cares about you, and he loves you and he wants you to know it.

1. Surprise you with a romantic dinner

Not being good in the kitchen is definitely not an excuse to not surprise you with a romantic dinner from time to time and real men know it. Even if he’s a total anti-talent at cooking, a real man wouldn’t give up that easily; he would find the perfect recipe and figure the whole thing out.

He would make an effort to buy scented candles and create a genuine, romantic atmosphere so that you feel comfortable, relaxed and taken care of.

2. Write a list of the things he loves about you

Instead of just saying ‘I love you’ once a month, a real man knows that this is simply not enough and that you deserve so much more. He rolls up his sleeves and starts writing a list of the things he loves about you because he has more than one thing to say to you.

He wants to make sure that you know how much he loves your smile, your quirks and your silly rituals. He doesn’t assume that you already know all of this and if you do, there’s nothing wrong with reminding you.

The easiest way to apologize is to just say ‘I’m sorry’ but a real man doesn’t just say it; he shows it. He shows it by sending you flowers, giving you special treatment, making a DIY gift and so on. And he does it like he really means it.

4. Write (and play) a romantic song for you

Not all men are able to play an instrument and that’s more than okay. But a real man knows that not playing an instrument shouldn’t be a barrier to surprising you with writing a romantic song for you instead. He knows that you’re not expecting him to be a pro at writing it but simply expressing his emotions and showing you that he cares would be enough.

5. Go out of his way to protect you

6. Compliment you on a daily basis

A real man doesn’t think of you as being needy if you expect him to compliment you on a daily basis. He sees it as something he enjoys doing because it makes you feel good and your happiness is his priority.

He reminds you of how beautiful you are when you least expect it. He tells you how much he appreciates your efforts to look your best. He cheers you up with uplifting and heartwarming words when you’re feeling down.

7. Give you a massage when you’re feeling tired

No matter how tired he is too, a real man would always put your needs before his. He makes sure to give you a massage when you’re tired without you even asking him. He doesn’t see it as something that he’s forced to do. He’s happy to release you of pain and remind you of what a great man you have.

8. Surprise you at work

A real man always makes sure to remind you that he’s thinking of you. Even if you’re at work, this doesn’t stop him from surprising you by ordering a lunch delivery, your favorite sweets or sending you an encouraging letter if you’re having a hard time at work.

If a man is determined to make his woman happy, nothing can stop him. So, stop making excuses for their lack of romantic gestures. Wait for the real one who will make an effort to prove to you that he’ll do anything to keep you. 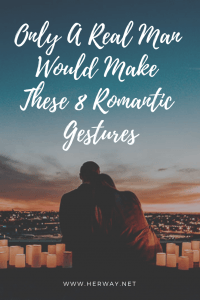 What Do 50-Year-Old Women Want In Bed? 16 Essential Things

[…] of the romantic gestures only real men do is prepare a romantic dinner. If you want to show your older lady how crazy you are about her and […]

25 Emojis Guys Use When They Love You (+ Their Secret Meanings)

[…] also know that he appreciates the way you make him feel. Consider this emoji a romantic gesture and proof of his devotion to […]