The funny truth about all human relations is that we have a tendency to justify the actions of the people we care for deeply.

Actually, we want to justify to ourself the fact that we love someone who clearly doesn’t deserve our love and who doesn’t deserve a place in our life so we make excuses for that person’s behavior.

We feel humiliated and foolish for caring for someone we know is not good for us and maybe is not even a good person in general but our heart refuses to accept this notion and constantly tries to see what lies behind this person’s behavior toward us.

It’s the same with you and this one guy in your life. From the moment you met him, he made some things clear.

He made it clear that he is not someone who is willing to commit and someone who can give you the love you deserve.

Even though he probably never told you something like this out loud, he sure did show it to you through his actions.

And ever since you met him, he has done nothing but cause you pain. You suffered a lot because of him and the way he’s been treating you but even all of that didn’t chase you away from him.

So it’s evident you have something that keeps you around this guy.

Of course, it is evident that you have some deep feelings for him. You love him and you would do anything for him to love you back.

But somehow, that isn’t happening, despite all of your efforts.

Although this man is a jerk to you most of the time, whenever you want to leave this situation, he does something to make you rethink your decision.

He does something which makes you give him another chance, even though he clearly doesn’t deserve it.

He gives you a little bit of his love and attention—just enough to keep you around. And this is something you hold on to for months.

After a lot of thought, you’ve reached a conclusion. You’ve come to think that this man is actually emotionally damaged and broken and that this is the cause of all of his problems.

This is the cause of his behavior toward you and this is what has made him the man he is today.

Because he has obviously been hurt in the past and he is not willing to allow this to happen again.

You simply assume that this guy needs your love to change, that he needs your guidance and support through life and that you can’t leave him hanging.

You see yourself as this superwoman whose task it is to save this man and to heal his heart.

Well, I hate to be the one to break it to you but chances are that this man is not emotionally damaged or broken.

Chances are that he is probably just a toxic man who plays mind games without any reason.

I know you are trying to get to the bottom of his behavior and that you are trying to find the reason for the way he’s been treating you but it’s time to accept that some men do this and there is nothing you can do about it.

I know this is painful for you to hear but I don’t want you to think that this guy loves you somewhere in the depths of his heart and that you just need to try a little bit harder for this love to come to the surface.

I don’t want you to think that he is actually running away from his feelings for you because he is scared of their intensity.

I don’t want you to think that he is petrified that you would hurt him and that this is why he refuses to give himself completely to you.

I don’t want you to think that there is a vulnerable, little boy, waiting to be loved, hidden inside of this man.

Because none of it is true.

This man has simply been using you and your love and kindness all along.

He is using you for his ego, for sex or just because he enjoys being loved by you or always having someone there for him.

Either way, the point is the same—stop justifying him because it’s about time you look the truth in the eyes. 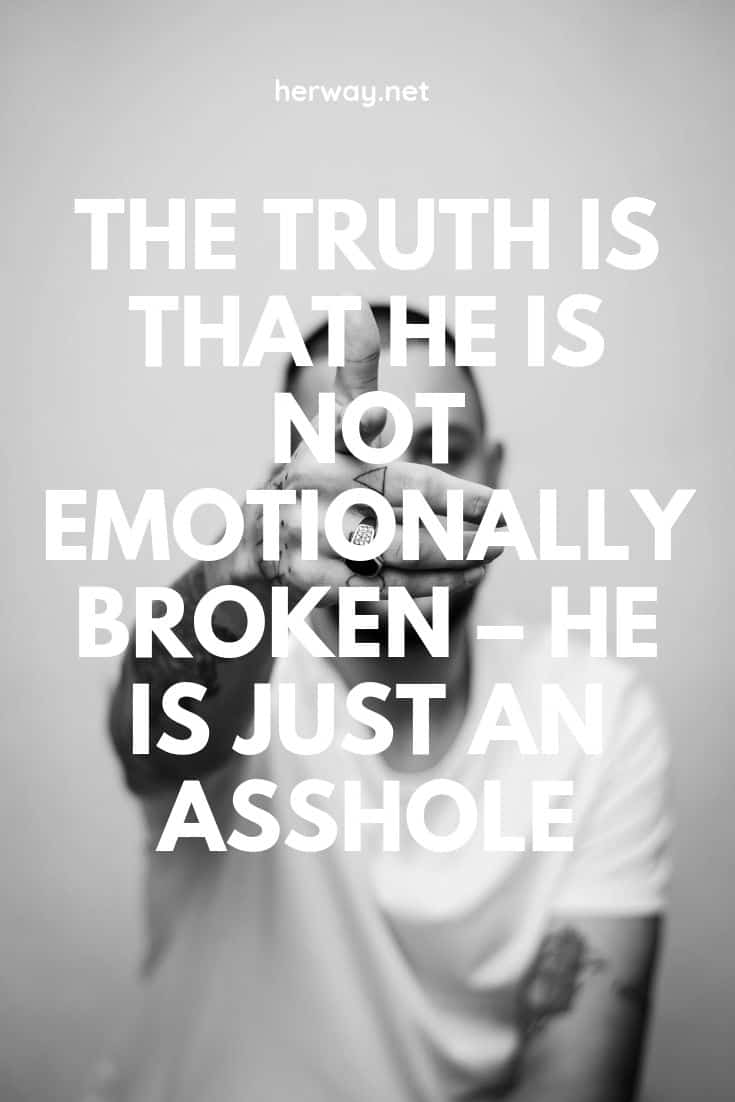 Hits so close to home. I finally believe it too. After the things he said to me when he discarded me. Wow. I can't imagine being so heartless and cold. It grosses me out to think I'd been sleeping with the enemy.