Spotting a nice guy in a crowd of toxic losers is a real challenge. Especially if you’ve spent great amounts of your time with the toxic ones who made you forget the traits of a nice guy. But, believe me, not all guys are assholes.

There are some good guys out there who are waiting for you to discover them and encourage them to make a move on you. You’ve probably seen them multiple times by now but somehow bad boys were always the first ones capturing your heart.

But, you realize this when it’s too late and you curse the day when you’ve decided to date a toxic manipulator like him. And then you start wondering where have all of those good guys been hiding from you and the rest of the world?

The thing is, they do exist but you were unable to spot them because all this time you were blinded by the toxic ones. In order to fix this, pay attention to the following tips on how to spot the nice guy in a sea of toxic ones.

1. He will be intimidated

Nice guys are often intimidated by women because they aren’t use to being approached by them. If you see that he seems nervous, fidgeting and avoiding eye contact at all costs with you, know that he is a good guy but your presence intimidates him (which will change with time).

A nice guy is not into any of those manipulative games you might have witnessed before him because he’s simply unable to deceive you. His feelings and reactions are genuine and they will never pretend to be something that they’re not only to get you to like them.

If you’re not sure whether he’s a nice guy or just another toxic guy (not worth your time), pay attention to his friends. I’m sure you’ll notice the difference between him and his friends (if there is any) and this difference will tell you whether your guy is what you’re looking for.

If his friends are noisy, pushy and dominating while he’s the total opposite, know that he is definitely a nice guy. Nice guys will always be in shadow from the bad ones because it’s in their nature to stay humble.

3. He will not try to amaze you

You will know that he’s a nice guy if he’s not trying hard to amaze you. It is because they are a little bit insecure about themselves and they have a fear of failure. They are afraid that you’re going to misinterpret something they’ve said to you and that is why most of the time they choose to play safely.

They respond normally and don’t try hard to show you affection (even if they really like you) because they don’t want to scare you off.

A nice guy will be 100% honest with you and you’ll see it in his eyes. You will never second guess anything he says to you because you’ll feel that everything he says is nothing but the truth.

Sometimes he’ll be honest to the extent of hurting your feelings but they do it subconsciously because they are wired to be honest no matter what. Nice guys are appalled by mind games and that is why they value honesty before anything else.

5. You feel comfortable talking to him

You know he’s a good guy if you feel utterly comfortable talking to him. Your conversations don’t seem pushy or fake. You feel the positive energy in the air and hours feel like seconds.

You enjoy spending time with him and you don’t find it hard to open up to him because it feels like a natural thing to do. You feel like you really trust him and that you’ve known him for years even though the two of you have just met.

6. He always texts you back

You don’t wait hours for him to text you back. Instead, he always makes sure to text you in a decent amount of time because he respects you and enjoys talking and texting to you.

A nice guy will never let you wait when it comes to texting because they don’t really plan their actions (because their ulterior motives are not toxic). They see your message, they answer it and then they hope for the best.

7. He sticks to his decisions

If he says that he will text or call you, know that he will. A nice guy will always stick to his decisions and promises. If he promises that he will do something for you, he will make damn sure to finish it in time.

He appreciates you as a person and respects your boundaries and wishes. He will never do anything that makes you feel uncomfortable or something that will make you question his intentions.

Yes. You will know he’s a nice guy if you feel that he’s different from everyone else you’ve been dating so far. And it is different, because it’s true. He treats you like a lady and he makes sure you feel entertained and safe with him.

Once you experience the magic of being with a nice guy, you’ll never think about the toxic ones who were definitely not worth your time. And once you target your nice guy, hold on to him and never let him go. 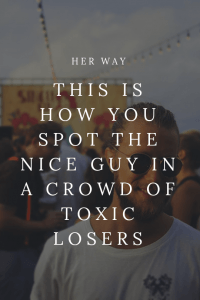