I didn’t intend to be in an almost relationship; I simply stepped into it without even noticing. I opened the doors that led my heart to the wrong man.

We went out on one date and one more and one more. We talked endlessly and we had so much fun, the emotions were building up, the chemistry was there and the relationship just progressed naturally.

I thought we were on the right path to something more meaningful until I started noticing all the regular signs that I was in an almost relationship.

He never called me his girlfriend, I never met his friends or family, we spent most of the time in my apartment, he kept avoiding all the serious conversations and reality suddenly hit me—I was in an almost relationship.

He had been going out with me for a few months and he was going to leave it at that, without ever progressing to something more.

I confronted him about it and he just went on and on about how things were not as easy as it seemed, how he needed more time, how we should take it slow… and I played along.

I was patient, I tried to be understanding but I was just falling deeper in love and he was still keeping his distance. By giving him time, I only made things worse for myself.

And let me tell you this; a heart breaks just as much after an almost relationship as it does after a real one. A heart can’t tell the difference, it just loves.

I guess I held on to hope that something would change. I chose to see the good in him and I ignored the bad. I ignored all the red flags waving in front of me and I kept waiting and waiting for him to be ready.

He never was. I don’t know if he will ever be. Maybe men like him never mature, maybe they are never ready and they never evolve, they never allow themselves to wholeheartedly love another human being.

It was so hard to get over him. To get over all the what-ifs and all the potential I saw in our relationship. But time took its course and I managed to heal.

I actually managed to do more than that and now I thank God for my almost relationship because although it was beyond painful, it was also a learning experience I had to go through.

Now I know how to read the signs. I won’t shut my eyes and hope for the best anymore. I will ask the right questions sooner and I won’t allow anybody else to string me along.

I will pay more attention to what a man does than what he says. Because when he was behind the screen typing me messages, he would tell me the sweetest words and things that made me think that we were getting closer.

In person, it was a whole different story. He wasn’t as vocal. He kept dodging all the personal topics, he asked more about me than he ever shared about himself.

He kept making promises he never fulfilled. He said the most beautiful words to make me stay by his side and left it at that, he never did anything that showed we were more than almost.

Because the longer I stayed, the more I cared about him. We made more memories that are impossible to forget. He became somebody mine without actually being mine.

I stayed where I wasn’t appreciated, where I wasn’t treated as enough, where I started to ask myself if I was girlfriend material, asked what was wrong with me and why he wasn’t stepping up his game.

I don’t ask myself those questions anymore because I realized it was never about me. It was always about him and his emotional unavailability.

I am more confident now because my confidence was shaken by an almost relationship. I almost lost it completely and I had to build it from scratch.

I had to reinvent myself and I learned what I am made of. Now I don’t allow anyone to take me for granted and I ask for what I deserve.

And for starters, I deserve to be someone’s girlfriend, I deserve someone who is sure about me and isn’t afraid to feel. 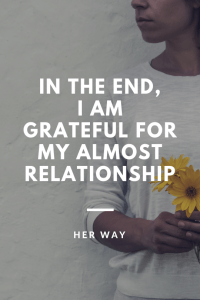