Okay, so you probably have that one guy on your social networking site who always texts you but never asks you out.

You two talk all the time. Your conversations are fun and interesting but that’s pretty much it.

He just doesn’t mention anything about wanting to go out with you.

This situation probably makes you confused and frustrated. It makes you sad because all you want is that one date with your crush and it seems you are not getting it anytime soon.

You are definitely wondering why he texts you all the time without asking you to go ever go out with him.

Well, here are some of the reasons why this happens:

Contents show
1 1. He is bored
2 2. He sees you only as a friend
3 3. He thinks you are physically attractive but he does not want commitment
4 4. You are his backup plan
5 5. He wants you to make the first move!

It is not such a pleasant thing to hear that the guy you truly like texts you only because he is bored. Well, ladies, this happens a lot.

This guy probably knows that you like him and takes advantage of it whenever he gets bored.

He knows you will answer his messages and do your best to entertain him.

You boost his ego with your huge desire to leave a good impression and he enjoys that. He is wasting your time and killing his.

If you think the guy you like is texting you because of this reason, then consider getting rid of him as soon as possible. He is not worthy of your time.

2. He sees you only as a friend

This guy texts you only to talk about his life problems. He knows you will give him the best pieces of advice and he appreciates you for that.

He sees you as a problem-solver. This does not mean that he is taking advantage of you. He does like you but only as a friend.

If you think the guy you like is texting you because of this reason, then you should search for a guy who will like you in a romantic way.

3. He thinks you  are physically attractive but he does not want commitment

This guy likes you and thinks of you as a very physically attractive girl but he just does not want a relationship.

Yes, he flirts with you pretty often but he is not sure if he is ready to commit just yet.

By texting you pretty often, he is keeping you hooked so that you will accept to date him once he feels he is ready to.

This guy probably wants more time to himself and his friends and he does not want to give up his freedom and engage in a love relationship.

If the guy you like is texting you because of this reason, then consider if it truly pays off waiting for him to be ready.

4. You are his backup plan

If you are his backup plan, it means he either has a girlfriend already or he is also texting his first option girl.

So if by some chance he breaks up with his girlfriend or if his first option girl rejects him, there will be a girl waiting for him—you.

If you are his second option girl, he does like you but not as much as to have you as his first option, so chances are he’ll never text you first but will reply when you text him.

In any case, you should ditch this guy from your life. You don’t deserve to be anyone’s second choice.

5. He wants you to make the first move!

This is quite rare for a guy to do. He dares to text all the time but he does not have the courage to ask you out.

It really does not make much sense.

I am not saying it is impossible but it is highly unlikely. The guy who likes you will ask you out no matter how shy he is.

It can be in a subtle way or directly but he will. 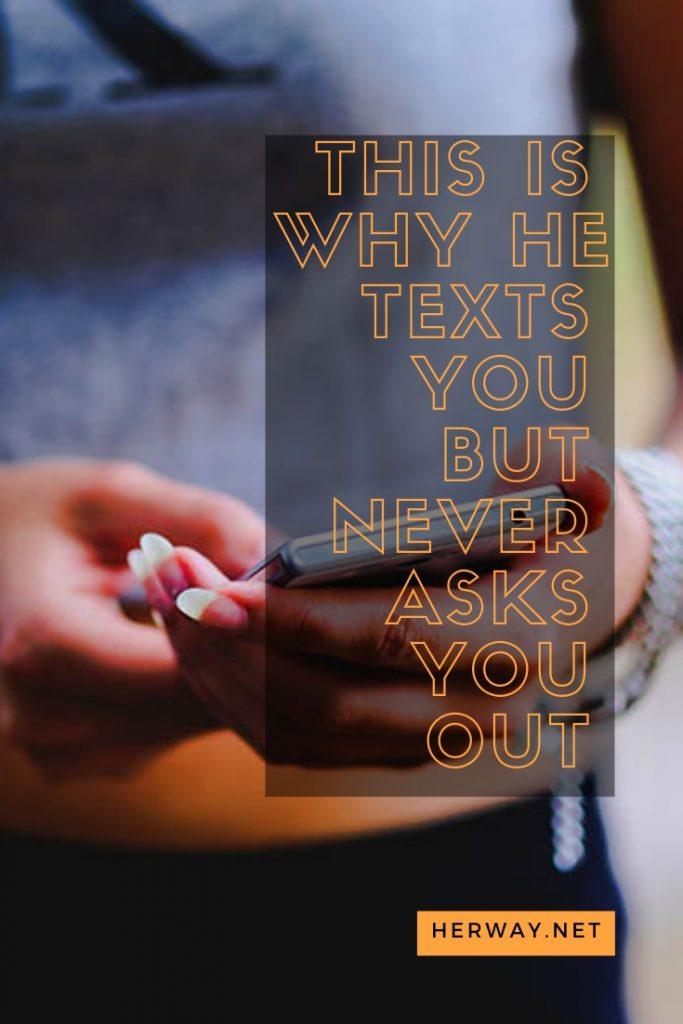 Does My Crush Like Me? This Is How You’ll Know For Sure!

10 Clear Signs He Is Getting Ready To Ask You Out

[…] he send you text messages or ask you in person about your plans for the weekend or your schedule in general? If […]