When you fall in love, you want a real-life fairy tale. You want someone to knock you off your feet and to give you butterflies and excitement.

You don’t want an ordinary love. You want to feel like you are on top of the world and like you can achieve anything as long as you have that special someone next to you.

And this is everything this guy is giving you. Ever since you met him, you feel like you’ve lost all control of yourself and as if you are going through a roller coaster of emotions. And the best part is that you like it.

But you also want certainty and stability. You want to have someone you can rely on and someone to always be there for you.

You want a man you can count on through thick and thin and a man who will be your biggest support on good and bad days. A man who will take care of you when you are sick and who’ll worry if you’ve gotten home safe.

You want a man whose feelings you’ll never have to question. A man who will love you the same at your best and at your worst. Someone you can be yourself in front of and someone you can plan a future with.

But this is not what you have with your boyfriend. And when you think of it, all that you are getting from him is a ton of maybes.

You might see him tonight, the way he promised. But maybe you’ll fall asleep all dressed up, with your phone in your hand, desperately waiting for his call or text. Maybe he’ll find time for you tomorrow or he might go see his friends because you are at the bottom of his priority list.

Maybe he simply forgot to text you back because he was too busy. Or because you were the last thing on his mind.

He might be playing hard to get and fighting his feelings for you or he might be just playing mind games with you. Maybe he sees your relationship as something serious or maybe he thinks of it as a meaningless fling. You might be the only girl in his life but there is also a possibility that he is seeing a bunch of other women simultaneously.

Maybe he loves you in his own way but there is also a possibility that he doesn’t care about you at all. He might be incapable of loving at all or he is just taking advantage of your feelings for him. He might be emotionally broken or maybe he is just a selfish asshole.

But have you ever asked yourself if his almost love is what you need in life? Is the guy who can’t seem to make up his mind about you really what you deserve or want? Or are you just settling for this Mr. Maybe because you hope that someday he’ll come to his senses and become Mr. Right?

Well, guess what? He won’t. He will never change and he’ll never become the mature man you hope he’ll be. He will always remain Mr. Wrong and it’s time for you to accept this.

It’s about time for you to accept that you are entitled to more and better. Time for you to walk away from this man because that is the only way for your Mr. Right to walk into your life.

Because he will come along when you least expect it. And when he does, you’ll be certain of his love, like you’ve never been sure of anything else in your life. And you’ll have no doubt that he is the one for you. 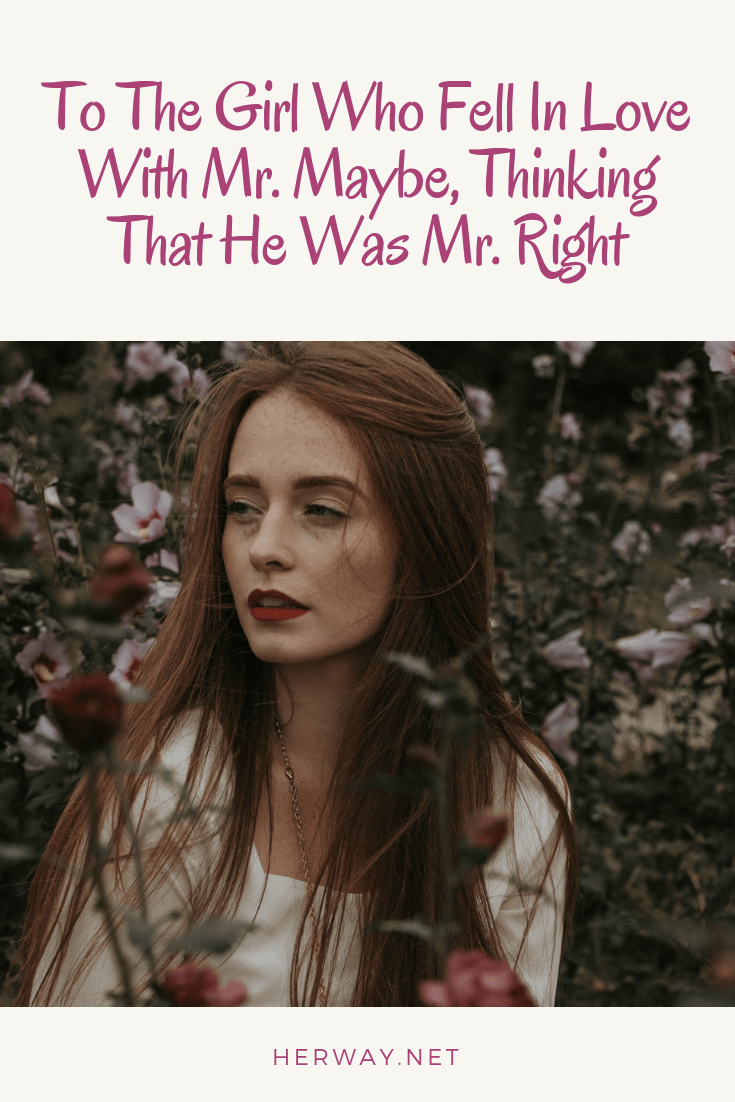