If you are making efforts, it’s only natural to want and need them back from the man you are with.

So if you find yourself with somebody who is not prepared to pull up his sleeves and invest in the relationship as much as you do, you are in the wrong relationship and trust me when I say that’s not where you want to be.

Nothing ever grows from wrong relationships, they only worsen with time. That’s why you are better off making yourself happy instead of staying with someone who makes you miserable.

Unless he is mature enough to handle a real relationship, you are better off single.

Someone who is ready to work on his insecurities or any kinds of issues he might have because he wants to be with you and that feeling overpowers everything else.

Unless putting a smile on your face is on his to-do list, you are better off single.

A man willing to put an effort into making you happy is a man worth keeping. You don’t need another douchebag who doesn’t care how you feel and all he is interested in is himself.

Don’t waste your energy on someone who doesn’t understand the depth of your emotions. Save those emotions for the right one. For the one who will appreciate them.

Unless he is willing to make you a part of his life, you are better off single.

Sure, for starters, it’s quite normal that it’s just the two of you and that you are getting to know each other gradually.

But after some time, as the relationship progresses, you should get to know the important people in his life. You should feel that he is sure enough about you and your relationship to invite you to family gatherings or to hang out with his friends.

Unless he takes the initiative and makes plans to see you, you are better off single.

It should go without saying but sadly, most men today are used to getting everything and giving nothing in return. You shouldn’t always be the first one to call and make plans for you guys to see each other.

He should ask you on Monday what your plans for the weekend are. He should put the effort into seeing you.

He should give you his time without you having to ask for it all the time. When a man cares, he makes things happen; everything else is excuses.

Unless he understands that a relationship is a two-way street, you are better off single.

It’s not just about making plans to see you, it’s about meeting you halfway. It’s about investing as much as you do. You will never feel like you are taken for granted or unappreciated when you are with a real man.

So, don’t settle for someone who wouldn’t move his ass from the couch for you while you move mountains for him. If he doesn’t value you, if he doesn’t at least try to match your efforts, he is definitely not the right man for you.

Unless he makes sure you know you are loved, you are better off alone.

You shouldn’t have to wonder if he cares about you as much as you do for him because it should be visible in everything he does.

Simply saying, “I love you,” after treating you poorly isn’t enough to make all the wrongs right. A real man will put his words into actions.

He will be there for you on your sunny days and when you are feeling under the weather. He will be drowning in work but he will find five minutes to check up on you and let you know that he is thinking about you.

He will keep his promises. He will show up and be present in your life.

He will do all those little big things that show just how close to his heart you actually are. And it will all come naturally to him, he won’t feel burdened or pressured, he will be ready to make you feel his love. 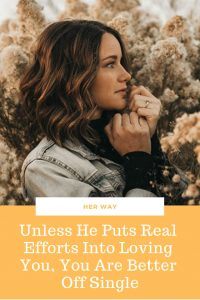