Skip to Content
Contents show
1 1. You’ll finally be with somebody whose words match his actions
2 2. You’ll know where you stand with him right from the start
3 3. He won’t lift you up just so he can bring you down later on
4 4. He won’t hide his baggage
5 5. He will respect you fully
6 6. You will be inspired by the things he does
7 7. He will like every version of you

1. You’ll finally be with somebody whose words match his actions

You expected him to cancel on your date at the last minute, but he showed up five minutes earlier.

He told you he’ll text when he comes home and he actually did. He said you are the only person he is seeing and it’s the truth.

You are used to a man who is inconsistent, who always says one thing and does the complete opposite.

Finally, you will have someone you can fully trust and it will be the best ever.

2. You’ll know where you stand with him right from the start

If he is looking for a relationship, he will tell you. If he doesn’t want anything serious, he will also tell you. He is honest and straightforward.

There is no beating around the bush, sending mixed signals, and playing games with your heart.

A real man would never do that. You will feel safe and relaxed in your relationship with him.

3. He won’t lift you up just so he can bring you down later on

A lot of men these days give you a perfect beginning.

They wow you, make effort, tell you they love you, and then either disappear from your life or reveal their true colors.

A real man would never do that. He would never leave without giving you closure or at least some kind of explanation.

He wouldn’t resort to manipulations, love bombing, and pretending that he is someone he’s not.

He would never intentionally hurt you and you will know that as soon as you get to know him better.

4. He won’t hide his baggage

You will know who are you dealing with early on in the relationship.

If he had a bad breakup, a divorce, or spent some time doing things, he will tell you.

He won’t be afraid to be honest and vulnerable in front of you. He knows that’s the only way you can become closer.

He has both his good and bad sides just like the rest of us and he won’t hide it. 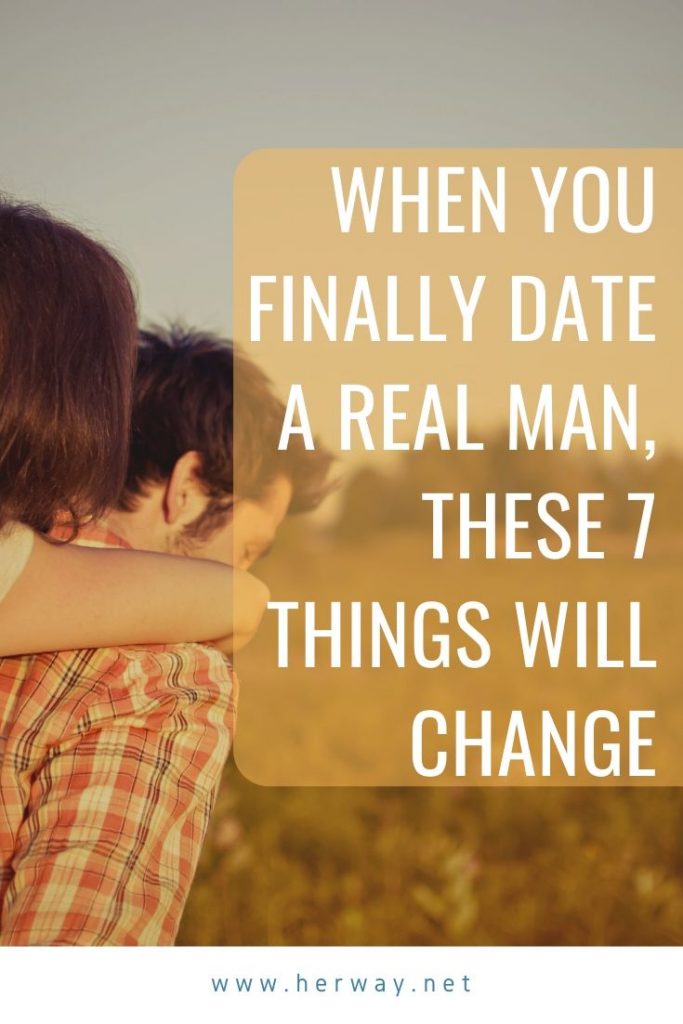 5. He will respect you fully

Respect – the most integral part of a relationship and the most common one to get overlooked.

A real man will respect your feelings, family, friends, work, life, space, privacy, you, and everything about you.

He will respect and acknowledge all the things you do for him and for your relationship, and he will never take it for granted.

He will be like a breath of fresh air in this world filled with disrespectful men.

6. You will be inspired by the things he does

For the first time in a long time, you will witness the most normal behavior a man could have and you will be blown away by it.

It’s not a surprise; most men you dated were immature in every element, lacked interest, and treated life like it’s one big game.

A real man plays hard too, but he always works harder.

He has interests and hobbies outside of his work, he is driven ambitious, and he will serve as an inspiration for you to improve your life and habits.

The best thing about him is that he will always find time for you and it’s actually a quality, loving, and caring time that you both need.

He won’t expect you to be perfect all the time. He won’t come by just when things are rosy and you are in a good mood.

He will be there through the smiles, tears, and anger.

He will be there through occasional emotional meltdowns and days of extreme happiness.

He will be there when there is nothing fun to do or talk about because being close to you is all he needs.