You took someone’s trust and you played with it. You took love and gave pain and misery in return. Is there a bigger crime than this one?

She gave you her trust and you were supposed to keep it, but instead you just showed her how big of a mistake she made choosing you.

She went all in—literally, with all her heart she choose to love. She didn’t think about the consequences and you know why? This girl you broke doesn’t have a mean bone in her body.

That’s why. She thought that just because she loves you, you’ll choose to love her, too. She wouldn’t never  do anything to hurt you and that’s why she thought you’d never hurt her either.

You took all and gave nothing in return. Instead of loving her the way she deserves, you sent mixed signals, you flirted with other girls, you were never there when she needed you and you never for a second cared for her.

You thought she’s this never-ending well and that she’ll have an  abundance of inexhaustible love to give. But you were wrong.

Her heart dried out. She kept on giving you her love until she had nothing left. If you had loved her back, if you had treated her the way she deserved, she could’ve loved you for a thousand years more.

But instead you broke her. And by breaking her, you launched an avalanche of other bad things that came along and changed her.

You broke her trust.

The worst part is you have no idea how heavy these words are. This girl who trusted others so naively no longer trusts anyone.

She was such an emotional, beautiful creature and you messed her up. Because this girl doesn’t trust her own shadow—let alone someone else. And this one is on you.

You made her build walls.

Nobody can get to her anymore. She simply doesn’t let people in after what you did to her.

Before you, she believed that everyone deserves a chance and that nobody is guilty until proven otherwise. Now it’s all opposite.

Every person who comes close to her is guilty of the crimes you’ve committed. She sees everyone else as potential heart-breakers and that’s why she’s always with one foot on the run.

Her walls are so high that the Great Wall of China would envy her.

You broke her soul.

You know that free spirit of hers she had and that positivity she’d plant everywhere she’d go? Well, that’s all gone now thanks to you.

People remembered her by her smile and the smiles she’d bring to other people’s faces. They remember her as a restless soul who never gave up.

She is remembered as a girl who lifted everyone else’s spirit and now we only get to hear tales of how she used to be.

You convinced her that true love exists only in fairytales.

She did everything right. She tried so hard. She didn’t made a single mistake. And yet she didn’t get the love she deserved. She should’ve, but she didn’t.

This girl who wore her heart on her sleeve, this girl who loved without ever expecting anything in return, this girl who believed in love more than she believed that the earth is round no longer believes that love exists at all. You did this to her.

You introduced her to pain.

Not only did you introduce pain to her, but you also made it the main component of her life. Not that she wants it there, but she doesn’t know how to get rid of it.

Times when she’d get up happy and eager to seize the day are like a distant memory to her. Now, she barely forces herself to get out of bed and she drags herself throughout the day, only looking forward to the night because she can sleep and not think about what loving you brought her.

You took away her light and you pushed her into darkness.

The damage you’ve done is immense. If you look into her heart, you’ll see no love, no light no end in sight because you’ve cut her heart open and taken it all away.

You poured your venom into her heart and now what was red and bright has turned into darkness.

But it’s you for whom I’m afraid.

This girl did no harm to anyone. And she deserves all the best in the world. For now, she has received only the worst, she got you. But this doesn’t mean that she will never get back up on her feet. But you…

You might feel superior now. You might have had your five minutes of fame. You might brag about how you played a good girl, but it won’t last.

Once the karma gets to you—know that karma always comes to collect—once the favours are returned, and once life knocks you to the very bottom, I’m not sure you’ll be able to get back to your feet.

To be honest and perhaps even a bit cruel, because of the things you did to her, you don’t deserve anything other than to be left at the very bottom where you’ll be able to feel how the darkness really feels. 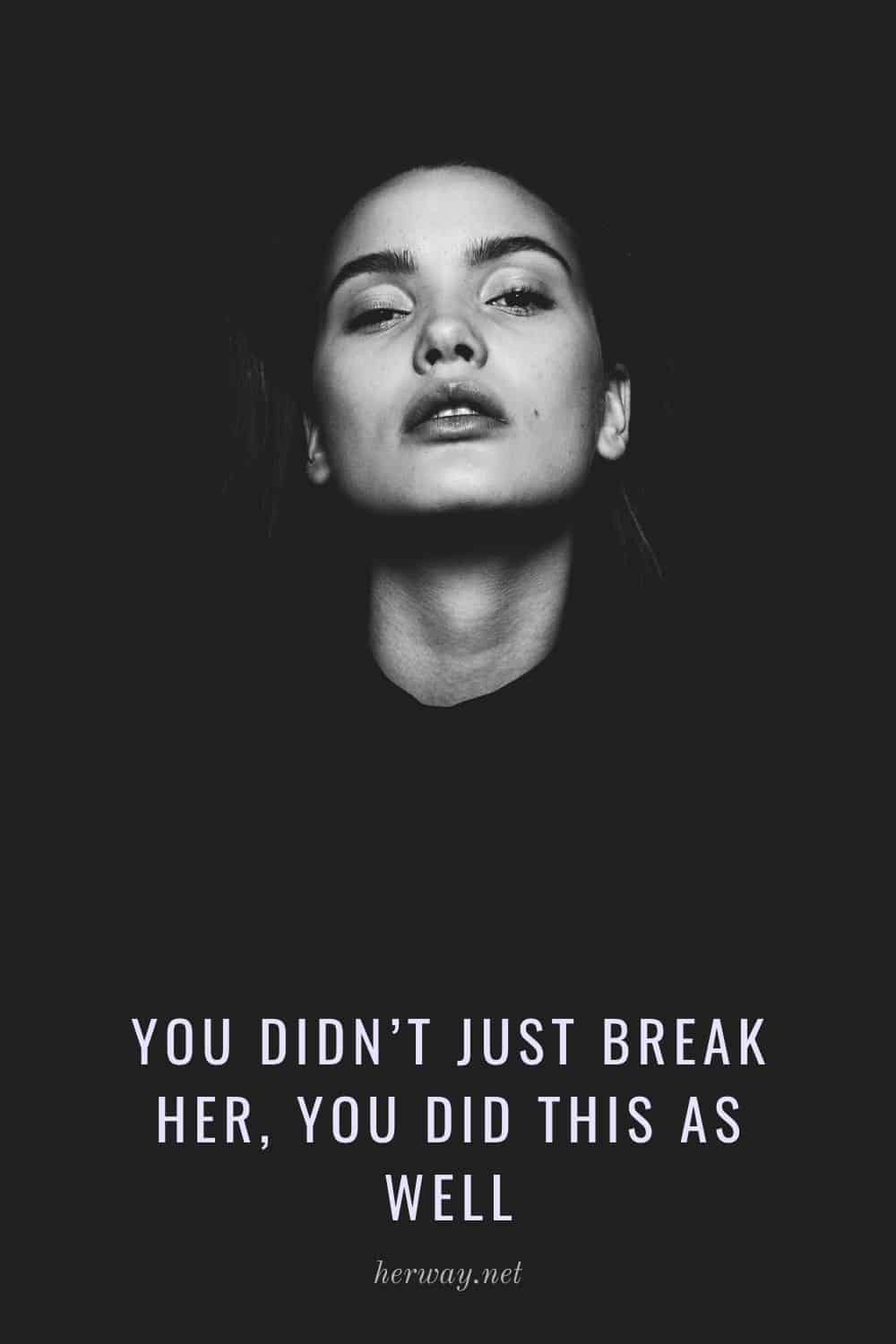 Your writing is helping me cope. I am where you are. xo