Let’s face it—even though being single rocks, it is not all roses and unicorns. There are times when you wonder if there is something wrong with you and if you are destined to end up alone.

Nevertheless, what you don’t know is that the women who stay single for longer actually end up the happiest and here are 5 reasons why.

Contents show
1 1. They are mentally stronger
2 2. They’ve had enough time to figure out exactly what they want
3 3. They didn’t waste their energy on relationships—they focused on themselves
4 4. They won’t enter a relationship for the wrong reasons
5 5. They won’t settle for less out of the fear of being alone

1. They are mentally stronger

Women who choose to be single for a long time are accustomed to going through life on their own. Yes, they have their friends and family but at the end of the day, it’s just them, their struggles and their inner demons.

These girls don’t have a man they can count on any time or someone to hold their hand, telling them that everything will be OK. Instead, they learn to fight for themselves, without anyone’s help.

What is even more important, these are the girls who got used to wiping their own tears away and putting a smile back on their own face, without expecting someone else to do it instead.

Yes, when you first look at this, you might think of it as sad but it is actually anything but that. You see, being their own hero gave these women incredible emotional strength and mental power and that made them unique and special.

2. They’ve had enough time to figure out exactly what they want

A girl who stayed single longer didn’t waste her time on multiple wrong guys who were making her life a living hell. Nevertheless, it certainly doesn’t mean that she doesn’t have a clue about romance and relationships.

On the contrary, girls like these have always been bystanders and observers. They’ve looked closely at other people’s relationships and it helped them understand what it is that they want and don’t want from life.

They’ve had more than enough time on their hands to realize what kind of man they need by their side.

No, this doesn’t mean they are too picky—they’ve just acquired a set of standards and conditions their potential boyfriend has to fulfill in order to get a place in their life and this comes in handy when choosing a future partner.

3. They didn’t waste their energy on relationships—they focused on themselves

While all the other girls spent years of their life trapped in toxic relationships, these girls remained single and dedicated all of their time to themselves.

While all the other girls were giving their best to save men who didn’t want to be saved, these girls pushed themselves forward.

While all the other girls gave all of their energy and efforts to work on their romantic relationships that were doomed to fail, girls who stayed single worked on becoming the best possible version of themselves.

Most importantly, while all the other girls were too busy desperately chasing the love of some man who never deserved them, these girls learned to love themselves.

And they succeeded in doing so.

No, this doesn’t mean that they’ve become selfish or egocentric—it just means that they are very well aware that one of the most important preconditions for happiness is knowing how to put yourself first.

4. They won’t enter a relationship for the wrong reasons

Once a girl who’s been single for a long time opens her heart to a man, she’s doing it only when she is certain that she’s found the one. She’ll do it once she sees that this man is right for her and that she can give him all of her unconditional love.

She’ll never get into a relationship for the wrong reasons—to get over someone toxic from her past, to heal her broken heart or to hurt someone just because her ex did the same to her.

5. They won’t settle for less out of the fear of being alone

The last thing a girl who remained single for most of her life fears is solitude.

This girl knows that being lonely and alone are two different concepts and she doesn’t need a man just to make her life complete or worth living.

This is why this type of girl will never settle for someone mistreating her or abusing her in any way.

Instead, this girl would rather remain single until the right guy comes along. Remember—she will never give up her amazing single life just to make a place in it for a man. 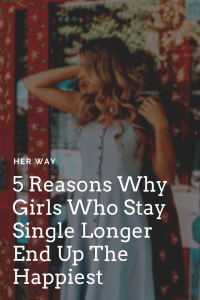