Skip to Content
Contents show
1 1. He makes plans with you at the last minute
2 2. He doesn’t introduce you as his girlfriend
3 3. He reaches out only when he wants
4 4. He doesn’t want to meet your friends
5 5. He disappears and doesn’t contact you
6 6. It takes ages for him to reply to your texts
7 7. He says his ex was a bitch
8 8. He invites you over just to have sex with you
9 9. He makes zero effort to win you over

1. He makes plans with you at the last minute

Let’s be honest, he probably had some plans with his friends but since they ditched him, he called you because he doesn’t want to sit in a bar alone.

You are his last option and he would rather spend some time with you than go home and be bored.

2. He doesn’t introduce you as his girlfriend

If he doesn’t introduce you as his girlfriend, it’s because he doesn’t see you as one. It is a sign that he probably has someone else (or more of them) but he wants to keep you as an option.

He doesn’t think you are important in his life and he doesn’t want to introduce you to the people who matter to him.

3. He reaches out only when he wants

If you caught him texting you at 2 A.M saying he misses you and that he wants you to be close, it means that you are nothing more than a booty call to him.

He just uses you to get what he wants and he doesn’t want to commit at all. He plays games but it is up to you how long you will put up with them.

4. He doesn’t want to meet your friends

Even if you said that there are people in your life who are extremely important to you, he will never want to meet them. In fact, he won’t even want to get to know you better either.

He just wants you to be there when he is into it and to leave him alone when he needs space. If you see these red flag signs, you should tell him that you are not his puppet and that he can’t do whatever he wants with you.

A man who is into you will tell you if he won’t be available because he knows you would worry. But if your boyfriend disappears for a couple of days and acts normal when he comes back, you should know that he doesn’t respect you.

A man like that will never love you. If he is doing all these things at the beginning of your relationship, you can imagine what he will do once things become serious.

6. It takes ages for him to reply to your texts

Okay, you all know that tactic to not reply to a text immediately after a guy or a girl texts you but a man who is interested in you won’t play any mind games.

He will show you that he is available at any time and that he is glad you reached out. But if he ignores your texts for a day or more and you see him actively answering other people then he is just a loser who doesn’t deserve you.

Move on while it is not too late.

Have you heard that saying: You should talk only good things about dead people and exes?

But if he constantly repeats that his ex was a bitch and that she is guilty of their break-up, there is a chance that he is maybe not over her yet and that you are just a rebound girl to him.

Also, if he talks like that about her, he will talk about you in the same way. He simply can’t stand the fact that he was the one who messed things up!

8. He invites you over just to have sex with you

If he invites you to his place just to have sex with you and tells you he has to get up early once you are done, it is a sign that he is not interested in you.

He will never love you and the sooner you get that, the easier it will be for you. He is just a fuckboy who wants to take advantage of you and he doesn’t have any plans to make any effort for you.

9. He makes zero effort to win you over

A guy like this has the attitude that he shouldn’t make any effort to win you over. He wants you to do all the work. And once you do all of it, he will then say he is not the right one for you and will leave.

The thing is that he really doesn’t know what he wants. He is just a spoiled brat who got every girl he wanted but he could never commit to any one of them.

So, if you see this behavior, don’t put up with it but instead give him a one-way ticket out of your life. 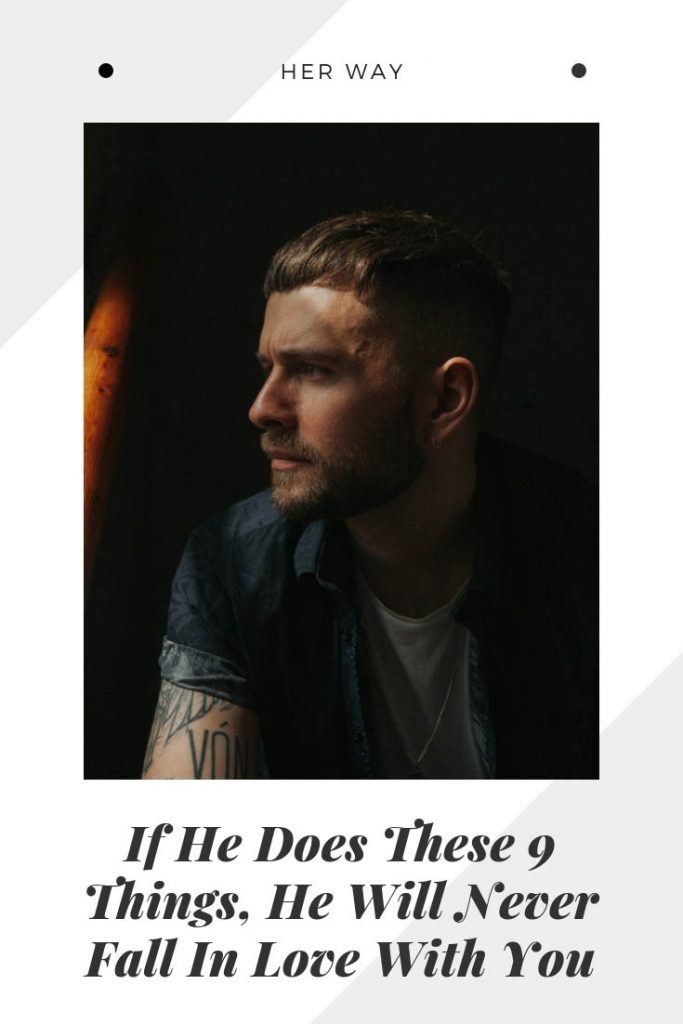