Distance no longer plays an important role in relationships. Now we have texting and social media platforms to always keep in touch.

If nothing else, this can even help you see whether he is into you or not.

You know that he can contact you anytime he wants. He has his phone on him all the time and there is nothing stopping him from texting you or checking up on you to see what you’re up to.

The point is, there is no more stopping two people staying in contact with one another.

This can tell you a lot at the beginning of your relationship. His behavior through texting can show you what he wants from you and what kind of a man he really is.

It can assure you whether he wants the real thing or he just wants something on the side. So, just to make sure he is jackpot material, these are the texts he will send you:

You may get disappointed when you get a text with just these two poor words. You may even be pissed off and you have every right to be.

I mean, is that the only thing he could come up with?

But, and there is always a but, if you look at this from his perspective, then you’ll see that he really couldn’t come up with anything better but he misses you badly, so he had to write something.

Even if it’s just, “Hey you”, it’s an effort which you should never disregard.

He wants to be the first thing you think of when you get up in the morning. Isn’t that just adorable?

He is some serious boyfriend material and you should not take him for granted. Enjoy his kindness and all the love he clearly has to give to you.

He cares for you and therefore he cares about what is going on in your life. He doesn’t ask this only because he has to. He is really interested in what you’ve been doing and how your day is going.

If you told him about an important meeting you have today, he’ll text you after he knows you’re done so he doesn’t disturb you and he’ll check if everything went well.

If it did, he’ll be happy for you and with you and if it didn’t, he’ll try to console and comfort you by lifting up your spirits because things are going to be better.

Your achievements are like his own. He loves you and he’ll do pretty much anything for you. So when you succeed in something it’s like he did it as well.

He’ll text you that he’s proud of you because he really is. Don’t be surprised if he tells everyone all about your success.

He wants everyone to know how competent you are and that is just one of the reasons he loves you.

He really wants to spend time with you. He misses you and he can’t wait to see you again. You should be so proud of that.

Usually, people tend to get sick of each other in a relationship. They seek a little time alone.

They want to go away somewhere by themselves to gather their thoughts and just rest a bit.

But he doesn’t need that. He feels whole when you’re with him and he wants to spend time with you. Isn’t that the perfect boyfriend?

This is clearly a sign of love. Why would he care about whether you have you eaten or not if he didn’t care about you?

You should be so happy that your boyfriend texts you just to check up on you.

He doesn’t want anything bad to happen to you, so he shows his concern and wants you to know he cares about you and your health. After all, he is planning on staying in your life for a long time.

Only a real man would do the responsible thing and talk to you face-to-face when there is something serious to talk about.

Sure, it’s easier to send a text, but it’s also much more immature. With sending this text, he shows you that he respects you and wants to talk to you like a normal, mature adult.

He values his time alone with you. He doesn’t care about fancy dinners in restaurants or going out to bars.

If you ask him, he will choose a nice and comfy evening cuddling with you on the couch.

You’re his priority and he would choose you over anything else, anytime.

You’re really making him want to be the best version of himself. You affect him positively.

Through your fighting and trying to be the best you can be, you’re encouraging him to do just the same.

Your success is both his joy and his challenge. Your dreams that come true are a huge push for him to try to do the same.

Is there anything better to hear than someone saying he loves you? I think not. Sure, it’s not just about someone saying those words—acts are the things that count as much.

But if he acts like he loves you and writes it to you out of the blue, then you are one lucky girl because you’ve landed yourself a jackpot boyfriend. 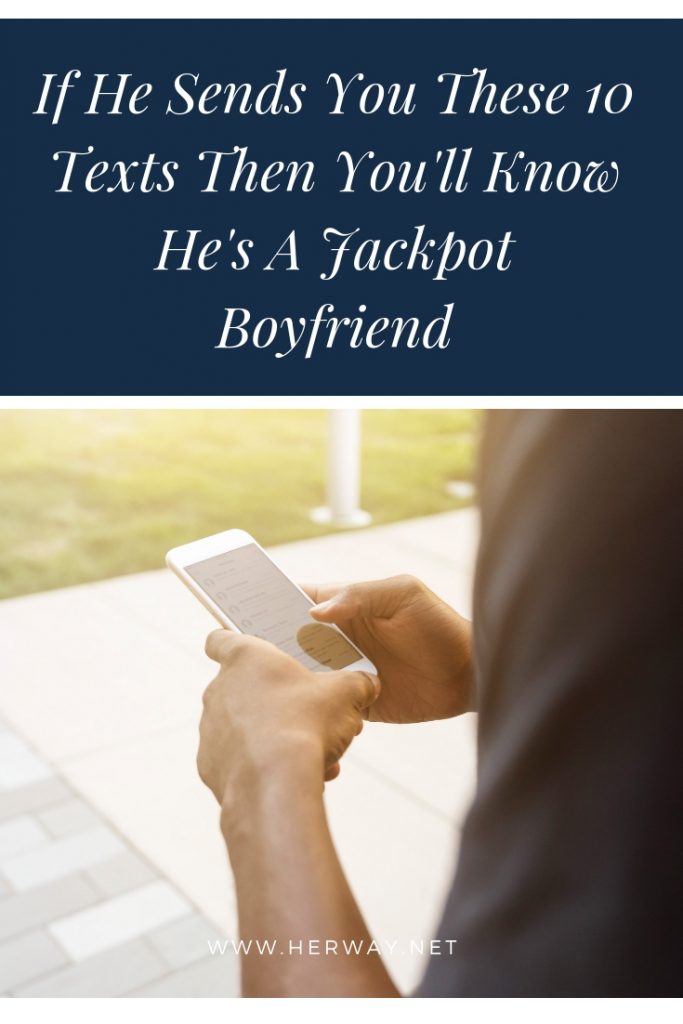