She kept asking herself: What if everything goes south? What if he breaks her heart? What if he messes up bad, will she survive? She was full of what ifs when they first met. Life taught her not to just trust a pretty face or flattering words.

But there was something inside of him, both devilish and angelic, something so strong that kept her hooked on him. She ignored her intuition because she thought it was just fear and she took a chance on him. And no matter how much it had broken her, she would do it again.

No, she wouldn’t go back to him. But she realized that she was not about to spend her life full of regret. All those moments with him were the best and the worst she had ever experienced. They were the closest things to heaven but they were also hell itself when it all went down in flames.

When she met him, she felt alive again for the first time in a long time. That feeling of being in love made her so radiant. You could see sparkles of joy in her eyes. He was doing everything right. He gave her his undivided attention. She enjoyed the little things like good morning texts and kisses goodnight. He bent over backwards to show her just how much she meant to him.

He was someone she could have fun with and laugh with but also have serious conversations with, about anything, for hours. It felt like he was somebody she could lean on. Finally, someone she could trust. But she couldn’t be more wrong as that was just a mask he was wearing to win her over.

It seemed like he was doing everything purposely, like he had it all calculated and figured out. He was like an angel until he won her over and until he made sure that she was all his no matter what. It was almost like his master plan was to use her love against her.

When he knew for sure that her love was genuine, that’s when the manipulations started. She hardly recognized the symptoms because he was very skillful. He knew what to say and how to say it. Every time she got mad at him she ended up apologizing or talking about something completely different. He had this capability of spinning every story to suit his needs.

She was blinded by the love she had for him. He manipulated the way she saw things. He wouldn’t call for days and would come back saying it was her fault, that she should have tried harder. Every time she complained about not seeing him as much, he would always call her clingy or too needy. Not to mention that every time she had a rough day he would make it even worse by calling her overly sensitive.

She had no idea what had happened to that sweet, kind and supportive man. The man that was right next to her would tell her he loved her but he would treat her like shit most of the time. He would ignore her, made her feel worthless and irrelevant, and then after he saw that she was already down, he would come in and save the day; that same day he had previously, single-handedly ruined.

She felt like her perfect dream had turned into the most horrible nightmare that she didn’t know how to wake up from. Things were getting worse and worse. His behavior got so hard to handle that he would call her names and put her down every time he could and she was just holding on tighter and tighter to him, trying to fix the unfixable.

He left her one day, out of the blue, and moved on to his next victim. She thought that he must be sweet-talking his new victim like he did with her years before. She cried a lot while she was in the relationship with him but she cried even harder when it was all over, until the point that her tears dried out and she was numb.

Him leaving broke her so hard, even though people kept telling her she was better off. She had saved herself from his toxic paws. She should be thanking God because he had let her be. She was listening and she knew they were right but that didn’t make the pain any less.

She went through a bad period for a while there. She felt so numb that she couldn’t feel all the good, all the people in her life trying to help her. She was beyond help until she decided to help herself, once she suddenly felt something shift inside of her. She felt some kind of hope and she discovered that she still had enough strength to fight for herself.

She succeeded. She showed him, everybody around her and, most importantly, herself, that there is no pain that could leave her down forever. She felt like she had been awakened. For the first time, she looked back and saw everything as awful as it was. She saw all the ways in which he had manipulated her and made her feel worthless. She saw him for the bastard he truly was.

He left her in ruins long before he actually left her life. He drained her emotionally. He ruined her self-esteem. And all those mind games made her question her sanity. She was so relieved that it was all over. She thanked God for moving him away from her. It was the best thing that ever happened to her.

She is now the woman she was always supposed to be. She is still a bit fragile but nevertheless stronger than she ever was. She took her life into her own hands. She found her way back. She laughs, works, persists, dreams, lives and loves herself and her life more than ever before. 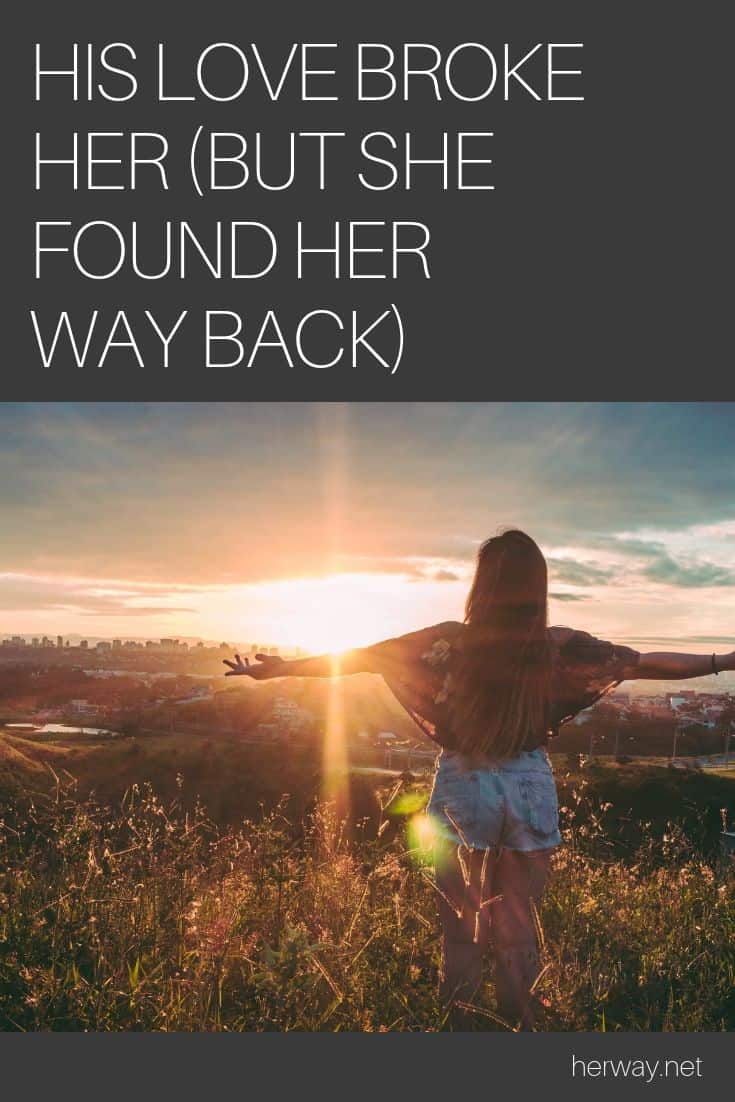