I was always someone who believed in fairy tales. I thought true love could conquer and defeat everything and everyone, just if it was strong enough. I don’t think I looked at life through rose-colored glasses—I expected it to be difficult and challenging but I believed in happy endings.

But most of all, I believed in our happy ending.

But most of all, I believed you were my destiny.

I believed in soulmates and I believed there was only one person meant to be for everyone. And no matter what happens and where life takes you, this is the one person for you—this is your forever person.

But most of all, I believed you were my soulmate.

I believed you were the one for me. I believed we were meant to be.

When we first met, I put all of my cards on the table. When I saw you, I felt like I’d known you for my entire life. I felt like you were the one I had been waiting for all along—you were my missing piece. I saw all the signs that you were definitely my soulmate.

What we had was breathtaking. I thought this then and I still think this now—we had a love like no other. We completed each other in a strange way, like we were one soul in two bodies. Everything was like in the movies—we finished off each other’s sentences, we understood and supported each other. And most of all, we loved each other unconditionally.

Whenever you see two people who share a love and connection as intense as ours, you expect them to end up together. You expect a happy ending. But ours was everything but happy.
If someone had asked me why we didn’t work out, I swear I wouldn’t know the answer. All I know is that we both got tired of fighting all the time. We got tired of each other’s stubbornness, of each other’s jealousy and each other’s hot temper. We were so much alike and we started to hate our own flaws once we found them in one another. But if someone had asked me what the last straw was that killed us, I wouldn’t know.

All I know is that I hated myself for a long time for not trying harder. I hated you even more for moving on with your life while I was still trying to pick up what was left of me. And I hated the universe. I blamed destiny for everything that had happened, because I was certain that we were meant to be together.

You were my soulmate, my forever person, my love, my Mr. Right, so how come we didn’t work out?

During one of my lamentations, a friend of mine told me: “If the two of you were meant to be, you would have stayed together.” At first, I got angry at her. Who was she to tell me something like that? Of course we were meant to be together—for God’s sake, we were made for each other, everyone could see that. She just didn’t understand it because she had never experienced something similar to our love.

But after a while, I grew to realize that she was actually right. It was one of the hardest things I had to face in life, that we were really not meant to be. For me, it was more difficult to accept this notion than the fact that we didn’t work out.

This realization helped me the most.

I realized I could never move forward until I stopped looking back on the past.

I was certain I could never love again until this helped me:  Recapture that Special Feeling and Learn to Love Again. And then I realized that this was all happening because of my fixation that you and I were meant to be together.

But actually, we were not. I realized that you weren’t right for me, no matter how much I wanted for you to be.

It doesn’t mean that we didn’t love each other, because we did. We were just not made for each other. It is quite simple—those who are meant to be together, stay together. 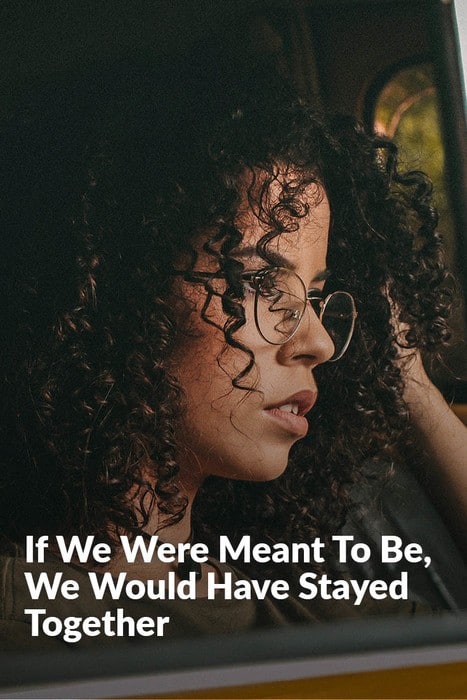