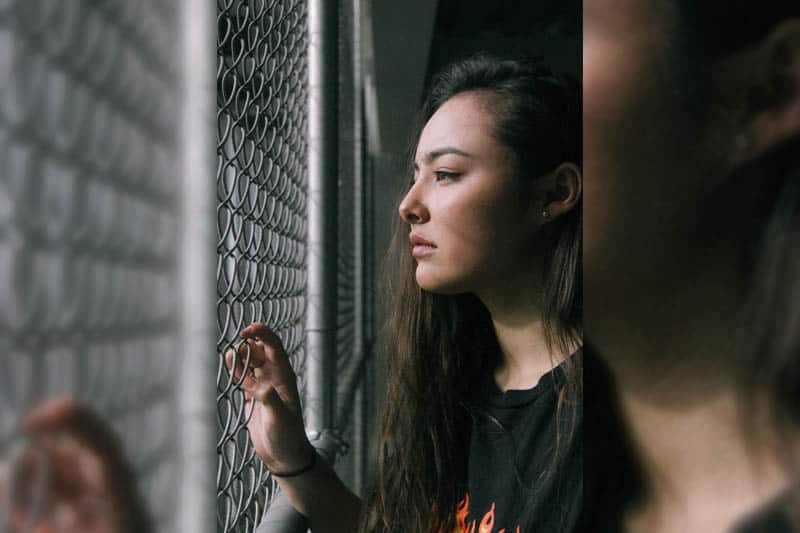 Can’t you see you’re all that she ever hoped for?

Can’t you see she’s trying so hard just for you?

Any sane man would choose her without needing to think about it twice. And yet here you are, letting her slip away.

She knows she isn’t perfect, but she’s trying.

She’s trying to be good for you with every atom of her body, with her whole heart and her soul. She is restless and no matter how hard she hits your walls and bounces back, she’ll always choose to try one more time. And one more. And one more until she finally succeeds.

The truth is she’s more than enough.

But you’re too much of an idiot to be able to acknowledge it.

So, don’t you dare tell her or anyone else how she’s not good enough. Don’t you dare tear her self-confidence down because of your inner demons or your insecurities.

Don’t let your fear of commitment make you lose a good girl.

Don’t allow it to be something you’ll regret the most when you look at your past.

She just wants someone who loves her enough to match her efforts. And that’s it. Things are so simple with her. Why can’t things be simple with you too?

She fell for you hard and she’s unable to hide it. Not that she’d want to anyway.

She isn’t ashamed of loving you. But she will be ashamed of giving you her everything if you turn out to be worthy of nothing.

When on one hand she’s trying her best to be enough for you, even though she’d probably be more than enough for anyone else, you are out there fighting for a Guinness World Record in coming up with excuses.

Where she stops talking about you with admiration.

Where she stops visiting your social media profiles.

Where her eyes don’t light up when you enter the room anymore.

When she stops getting butterflies in her stomach at just the thought of you. Because once she stops with all of this, you lost her forever.

You’re afraid to let everything go. You’re afraid you’ll be missing out on too much if you commit to a single person. You’re scared of the expectations and the efforts you need to put into a relationship.

It’s easier that way, isn’t it? To not commit, to not tie yourself to a single person, to not have anyone who expects anything from you.

To wander from one person to another without ever making your heart fall for someone completely because you’re scared someone might break it.

But all this leads you to waking up in a cold bed, to feel lonely even in the most crowded room, to feel cold on the inside even if it’s 100 degrees outside.

Even though you don’t see this now, it’s the truth.

If you continue seeing only her mistakes, she’ll get tired.

If you continue seeing her as someone who can’t do anything right, or if you keep focusing on her imperfections, eventually she’ll see herself as someone who’s isn’t good enough for you.

She won’t leave because she doesn’t want to be with you. She’ll leave because you’ll convince her with your behavior that she isn’t good enough for you.

She’ll leave because she’ll think in doing so, she’s making a spot in your life for someone who’s worthy of your love.

Before you mess up both of your lives, before you break her, stop for a second and think.

You’re just too damn blind to see it now.

But you’ll open your eyes eventually.

Eventually, you’ll see her worth and how she was a one of a kind girl. I just hope it won’t be too late.

Because if you let her go, if you convince her she isn’t good enough, she’ll bear that cross as long as she lives.

She’ll walk through her life thinking there is something wrong with her when in fact you only needed to bring up her flaws so you could have some kind of excuse to not commit to her.

In reality, she is perfect, but it’s easier for you to mess her up than it is to stand up and face your demons.

Don’t project your insecurities onto her.

Don’t bring her down so that you would be able to keep yourself on the surface. She deserves more than that.

If you aren’t ready, let her go.

Thank her for everything and set her on her way. Don’t keep her at arm’s length because that’s killing her.

Let her be happy with someone who’ll know she’s perfect the way she is, who won’t see her as if she isn’t good enough.

Let her find her own happiness if you aren’t ready to choose her. Because there will be someone who’ll appreciate her efforts and who’ll be able to make her a priority.

She wants it to be you, but truth be told, it doesn’t have to be you. Sometimes God gives us the biggest gifts by not accepting our prayers.