She was positive you guys were on the same page. And who could blame her? You never said anything to make her think otherwise.

She remembers telling you that she was sure about you, that she was there to stay a lifetime. She remembers you telling her that you felt the same way. That’s why nothing that happened later on made any sense to her.

You see, she is totally unlike you. She doesn’t have an insincere bone in her body. She meant every word she said. And for you, it was nothing more than just words.

It was you telling her what she wanted to hear so that every time you would let her down she would have something to hold on to.

You lost her bit by bit. It didn’t happen overnight. It wasn’t one big thing that drove you apart, it was millions of little things that accumulated over time.

It was one disappointment after another. The last thing you did was just the tip of the iceberg.

She felt like she was with you and all alone at the same time.

You lost her by serving her lies when she gave you nothing but the truth. You fed her false promises until she could no longer hear any of it. She would know that anything coming out of your mouth was a lie.

You lost her by making it all about yourself instead of looking at the two of you as a team. She felt left out. You made sure your needs were met and you didn’t pay much attention to hers.

At least not anymore. You used to before. She wanted you to change your ways so much but she never imagined it would be for the worse.

You lost her because she could no longer recognize you. You weren’t the man she fell for. That sweet and loving man who had all the time in the world for her was no longer there.

Your visits were shorter. You would wait longer and longer to reply to her texts. You would ditch the plans you made with her if something better turned up. You were there only when it was convenient and not a moment longer.

You lost her because you made her think that she was the sole cause of your problems. You told her that she was not all that innocent in all of it. That a lot of issues you had were with her.

She lacked understanding, she hadn’t supported you enough and so on and so on. Your claims were unfounded because even though she admitted she knew she wasn’t perfect, she knew that she had done her best for your relationship.

You lost her because you apologized in vain. Saying, “I am sorry,” meant nothing to you. You would say the words and go ahead and do it again.

You would know how to soothe her and get on her good side again. But she started seeing right through you. She saw that all your sorries were worthless.

You lost her because you never really valued her. You mistook her kindness for weakness. You took her for granted. You couldn’t see how amazing she was just because she was so grounded and humble.

She would always put herself in your shoes before making a decision. You couldn’t recognize all the efforts she made to understand you better.

You lost her by treating her like she was your safety net. You knew just how much she loved you so you figured that you could come and go as you pleased.

But you reached that limit inside of her. The limit she herself was unaware of. At that point, she knew that enough was enough.

That if she kept on forgiving you it would be a lifetime all right but a lifetime of misery. And misery was one word and one feeling that she couldn’t connect with love. She chose to make herself happy by refusing to let you continue making her unhappy.

That’s why this time, her goodbye is final. She can’t wait anymore. She can’t be the one who understands and forgives anymore.

Don’t even try to get back with her. She no longer has time to waste on you. You really lost her for good this time and you have nobody to blame but yourself. 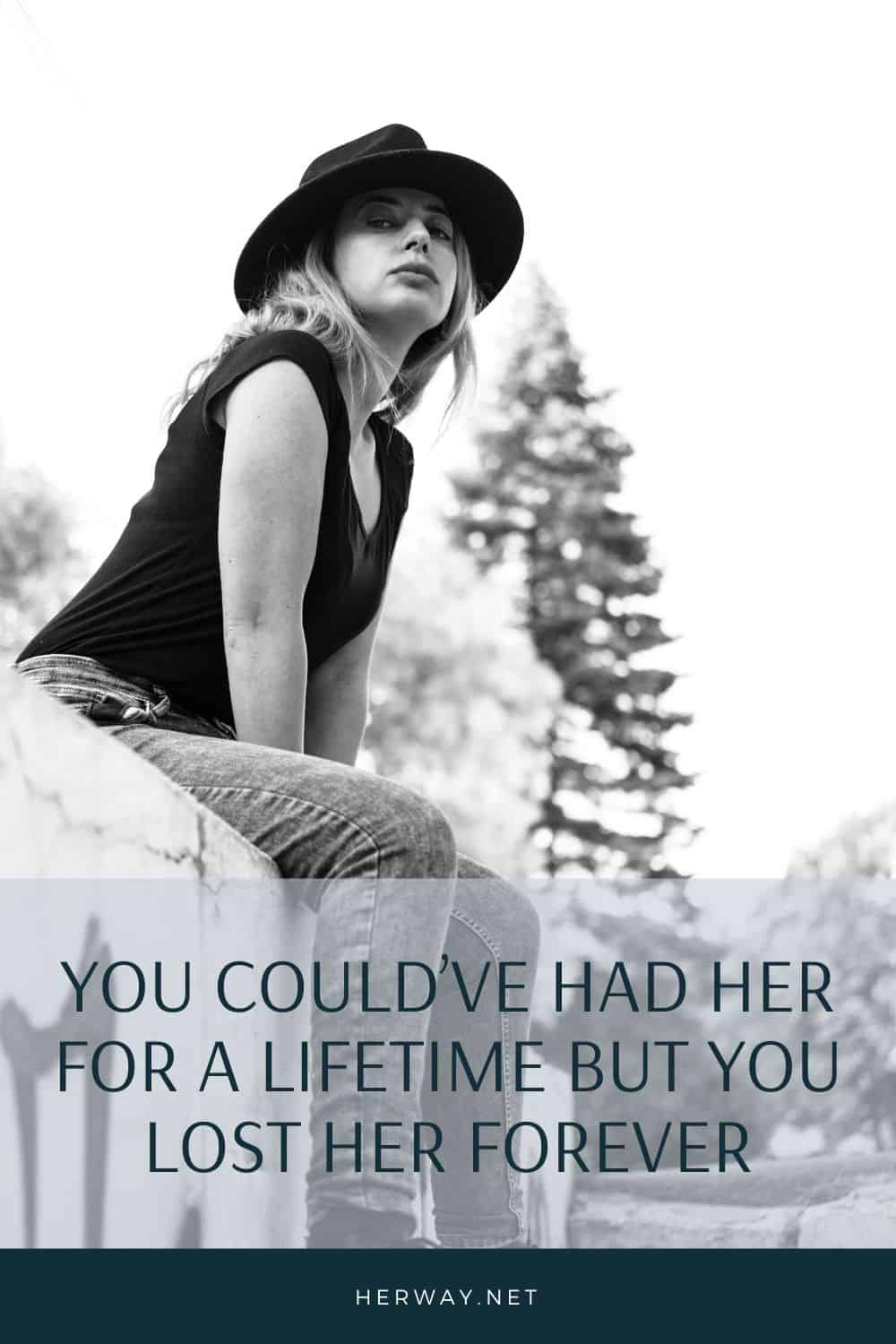 You Are A Lesson I Wish I Never Learned

[…] day when you didn’t choose me, you actually lost me. You lost me forever and there wasn’t a way that you could bring me […]

[…] Congratulations, you lost a once in a lifetime girl. […]