I bet there’s not a woman out there who hasn’t sat on her bed, confused and pondering whether or not she should call him.

It’s really easy for us to give advice when our friends are in need of some but when it comes to ourselves, we’re helpless.

More often than not, I get asked by my girlfriends for advice on this topic, because it’s really easy for me to give the advice I feel is right when it’s not me who’s in question.

But when I get myself in the same situation, I end up completely clueless about what to do, because we, as women, are so used to being the ones pursued that actually taking things into my own hands and calling first seems a bit needy or desperate.

Now, I know that’s not the case, and I am learning to recognize when it’s okay to be the one to make the first move and when to allow a guy to woo me.

Sure, there have been times when I have mustered up the courage and called, and it sometimes backfired. But honestly, I’m glad. Because this is all a learning experience and how are you supposed to know if you don’t try?

I can’t tell you how many Saturday nights I could’ve spent in a more enjoyable way than by waiting by the phone for him to call and wrecking my head trying to get myself to call him.

The truth is, good guys are always going to like being called. They know that the ball isn’t always in their court and that girls are just as capable of picking up that phone and calling and why wouldn’t we?

I’ve tried to recollect all my experiences on this topic and those of my girlfriends and get to the bottom of the whole calling thing. Here’s what I’ve come to realize to be the case!

Contents show
1 The most important thing is to always follow your gut instinct.
2 If he said he was going to call you, wait, and don’t call him first.
3 If things are going great and you sense a connection, call him first.
4 We live in a modern era where it’s finally totally okay for a woman to be in control.
5 If you feel he’s playing mind games with you, do not call him.
6 If the guy seems a little shy by nature, it’s okay to call first.
7 Are you sure he has your number?
8 Sometimes, the guy just isn’t sure if you like him back.
9 Does it feel right to call him?

The most important thing is to always follow your gut instinct.

Deep down, you always know the answer. Your gut always has a way of telling you and all you have to do is pay attention and follow it. Never force anything, it has to feel genuine and organic.

If you feel like the date went well and you got on, then it’s okay to call him. If you feel like he was genuinely interested and had fun, then there’s no reason to question yourself.

But if the date didn’t go to plan and it wasn’t as comfortable and there was nothing from his side to let you know he was that interested, then it’s probably best not to call.

If he really liked you, he’ll call you but if you feel he wasn’t biting, it’s probably best to not be the one texting or calling first. There’s plenty more fish in the sea.

If he said he was going to call you, wait, and don’t call him first.

I truly stand by this. If a person tells you they are going to call you, believe them, keep your fingers crossed and wait (but don’t wait desperately by the phone all day long).

If he seems like he likes you and he openly tells you that he’s going to call, there’s no reason to beat him to it. Give the man a chance to prove himself.

Also, this is a good test to see if he is a man of his word or if you’re dealing with a bullshitter. If he calls, that’s awesome, there’s something there but if he doesn’t, you got rid of potential trouble.

If things are going great and you sense a connection, call him first.

Do you like the guy? Are the dates going well and do you feel a connection and a mutual liking? Then why not call first?

There is nothing wrong in sometimes being the one to initiate things! It’s one thing if he explicitly said HE would call but if that wasn’t made clear, then by all means, call the guy.

He’ll most probably be really pleased when he sees you reaching out first and you’ll set up another date!

Sometimes, men are just as scared as we are! And when you help them out, things usually work out for the best. Believe in the connection you have and give yourself a nudge and call the guy.

We live in a modern era where it’s finally totally okay for a woman to be in control.

Even if you haven’t been on a date but you flirt and get all pleasantly awkward around each other, get his number and ask him out. It can be a call or a text, it doesn’t matter.

But nowadays, it’s finally okay and not frowned upon for women to take control of things and be in charge of things. Nobody is going to find it weird and it will be pleasantly refreshing.

If he likes you, you’ll be so happy with yourself because you’ll probably get yourself a cute, little date and if not, at least you tried, you put yourself out there and you gave it your all.

It’s not the end of the world if the guy says no. Everybody deals with rejection all the time, life goes on and so will you!

If you feel he’s playing mind games with you, do not call him.

If you two have been hooking up at times and he is never true to his word, don’t call him. If you feel like he’s playing mind games and goes days without reaching out and getting back to you, screw him!

That kind of guy is not worth your time. Let him be someone else’s problem.

You don’t need anybody who will treat you like a piece of meat when he feels like hooking up but when you want to see him, he goes on a dry spell and is nowhere to be found.

If the guy seems a little shy by nature, it’s okay to call first.

Not every guy out there is the type they portray in the movies. Some men actually aren’t as macho and straightforward as movies make it seem and as much as they like you, they are a bit apprehensive about reaching out first.

It’s totally fine to lift some weight off his shoulders and be the one to reach out.

He’ll be really glad that you’ve called and it will give him the confidence boost he needs to call you at a later time. Don’t think twice and get yourself that second date.

Are you sure he has your number?

Nowadays, we all use social networks so much for all kinds of communication that exchanging phone numbers sometimes doesn’t even cross our mind.

We just give out our Facebook or Instagram and expect them to DM us there. So then, don’t wait for an actual call on the phone, because the guy might night actually have your number!

In this case, either give him your number or be the one who always opens that line of communication. You can talk on social networks but he’s not the one who can actually call your phone, so don’t hold a grudge, there’s no reason to.

Sometimes, the guy just isn’t sure if you like him back.

Again, guys are like us. They need a little nudge every now and again in the right direction to get them to do the right thing.

He truly might not be sure if the feelings he has for you are reciprocated so he doesn’t want to make a fool of himself and call, only to be left hanging.

Reassure him! Call him first. Let him know you do actually like him and that you had a nice time and you’re more than open to another date.

That way, he’ll be encouraged to call you after the next date and you won’t be the only one in charge of it. Sometimes, it’s really that simple.

Does it feel right to call him?

You are the only one who truly knows the answer to this question. It is only up to you to ultimately make this decision.

We all have our own experiences when it comes to our love life and all one can really do is try and listen to what our gut is telling us!

There all these signs you can follow and use as a guideline to make the best decision for yourself but sometimes, things aren’t as black and white as we make them out to be.

Sometimes, you just have to be bold and take the leap and deal with the consequences. It’s really not that big of a deal. If after reading this you feel that’s the right thing to do, then call the guy and whatever happens, you did nothing wrong and can only be proud of yourself.

Do what feels right for you. That is the best piece of advice you can get. Only you knows what that is, so go for it, and remember–no regrets. 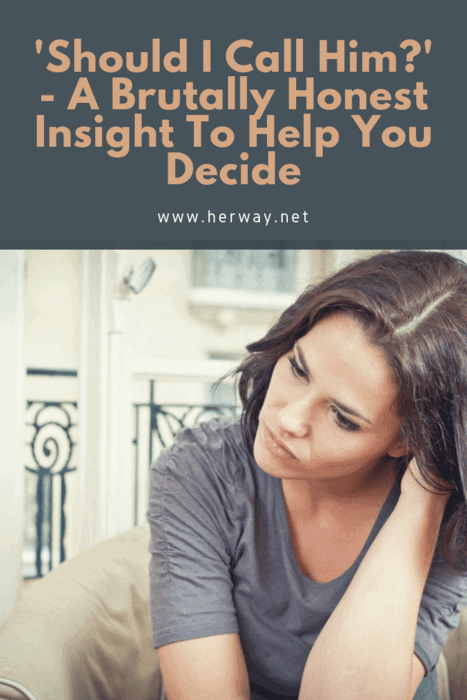