Sometimes, you need to lose a person to see their true worth. You need to feel their absence to start seeing the true value of their presence.

Sometimes, you need to have some people abandon you just so you could understand that they deserved you to love them much more and for you to treat them way differently than you did.

For them to walk away from you just for you to see that letting them go was the worst mistake of your life.

That is exactly what happened with you and this girl. With the girl who loved you more than she loved herself and who was ready to do whatever it took just to see you happy.

With the girl who was always there for you as your biggest ally and teammate. Who was the only person you could always call and the one you could count on, no matter what.

The girl who loved you at your best and at your worst. Who believed in you and who was ready to confront the world just to defend you.

The girl who took care of you, even when you didn’t take care of yourself and the girl who tried to save you from everyone, including yourself. The girl who was ready to move mountains just to see you smile.

Nevertheless, you never appreciated her or the sacrifices she was making. You took her love for granted, thinking that she’d forever remain a fool who would love you unconditionally despite everything you were doing to her.

That she would forever continue to try around you, while you never even thought of putting the slightest effort into your relationship. That she would waste her entire life trying to make you become the man you should have been from the start.

However, that was where you were wrong. After years, you’ve finally done it—you’ve chased her away.

Well, guess what? You really should have. But you should have done it in time, while she still cared because now she has opened her eyes, now the roles have switched and now she couldn’t care less about you.

You see, she doesn’t need your love now. You should have given your entire self to this girl while she desperately waited for you to give her the place she deserved in your life for you to commit to her. While she waited for you to get your shit together and show her that you cared.

I know that you miss her because you finally understand some things but it’s too late for it now. You should have chosen her over your shitty friends and all of those other women in your life while she was prioritizing you and craved you to put her first. While she begged for breadcrumbs of your love and while the only thing she wanted was your undivided attention.

There is no use in desperately trying to reach her now. No use in calling her friends, asking to give you her new number, no use in walking by her house, hoping to see her and no use in showing up at the places you think you might encounter her.

You should have called her all those times she fell asleep in a fancy dress, waiting for you to pick her up, like you promised, while you were too busy drinking with your buddies who are now nowhere to be found. You should have answered all of her late-night calls when she was sick with worry and while you were banging some random chick you picked up at a bar.

Instead of trying to return to her life, be man enough and just let her be. Let her be happy far away from you because you obviously could never give her the happiness she deserved and let her heal the heart you broke.

Just one more thing—don’t ever hope that you’ll find someone like her. Don’t bother looking for her in every woman who comes your way because trust me—she is nowhere to be found.

You had your one-time chance for happiness with this girl and you blew it. And this is something you’ll have to spend the rest of your life regretting. 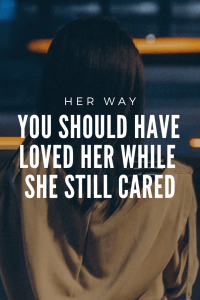