Perhaps, I didn’t want to complicate things by entering an overthinking realm, so I subconsciously decided to just go with the flow and listen to their words instead of paying attention to their actions and, most importantly, their BODY LANGUAGE.

I capitalized the terms body language for the sake of accentuating its importance that is often underrated. I’ve learned this the hard way.

If I had paid more attention to what their bodies were telling me, I wouldn’t have experienced so many plot twists, the disappointment of fleeting romances, and unnecessary suffering due to modern dating.

Lucky me that I know how to turn my mistakes into valuable life lessons and stories that will help others (you) avoid going through the same things. 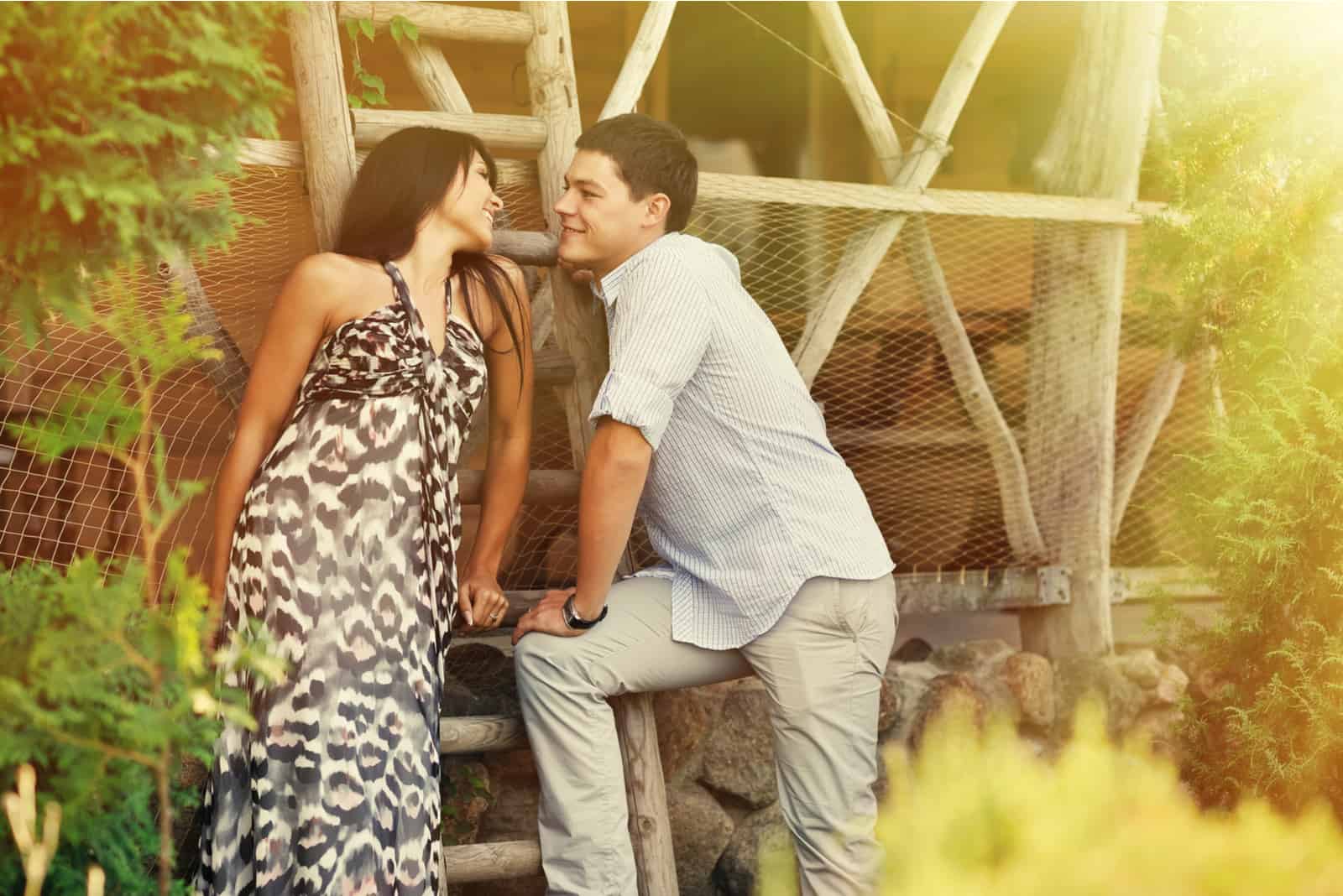 We often forget that body language is also a part of our communication and our way of exchanging thoughts and feelings. Our facial expressions can tell others so much about how we feel at a certain moment without needing to say a single word.

Our body movements can tell others if we’re feeling uncomfortable, disappointed, vulnerable, happy, in love, or not in love.

“Body language is a very powerful tool. We had body language before we had speech, and apparently, 80% of what you understand in a conversation is read through the body, not the words.” – Deborah Bull

The funny thing is that we often don’t pay attention to other people’s body movements, even though they make up 80% of what we understand in conversations.

Maybe I should rephrase this into the following:

We either don’t know what a certain body language sign says about other people’s feelings and intentions or we subconsciously decide to ignore it and rely on other communication aspects such as words.

And, that is how, my ladies, we end up overthinking: He seemed a little bit reserved yesterday, but he said that he liked me a few days ago. When we’re together, he barely ever looks me in the eyes, but he texts me every day how much he cares about me.

If you’re really into that one guy, chances are you will unwittingly decide to ignore all of his negative body language signs. By doing that, you end up living in an illusion, convincing yourself that everything is going smoothly.

And then, after some time, you realize that you tricked yourself into believing that this guy genuinely cared about you when, in reality, you felt the exact opposite. His body language was desperately trying to tell you that, but you refused to acknowledge it.

RELATED: He Says He Loves You, But This Is How You Know If He Means It

If he really likes you, then his body language will confirm that! 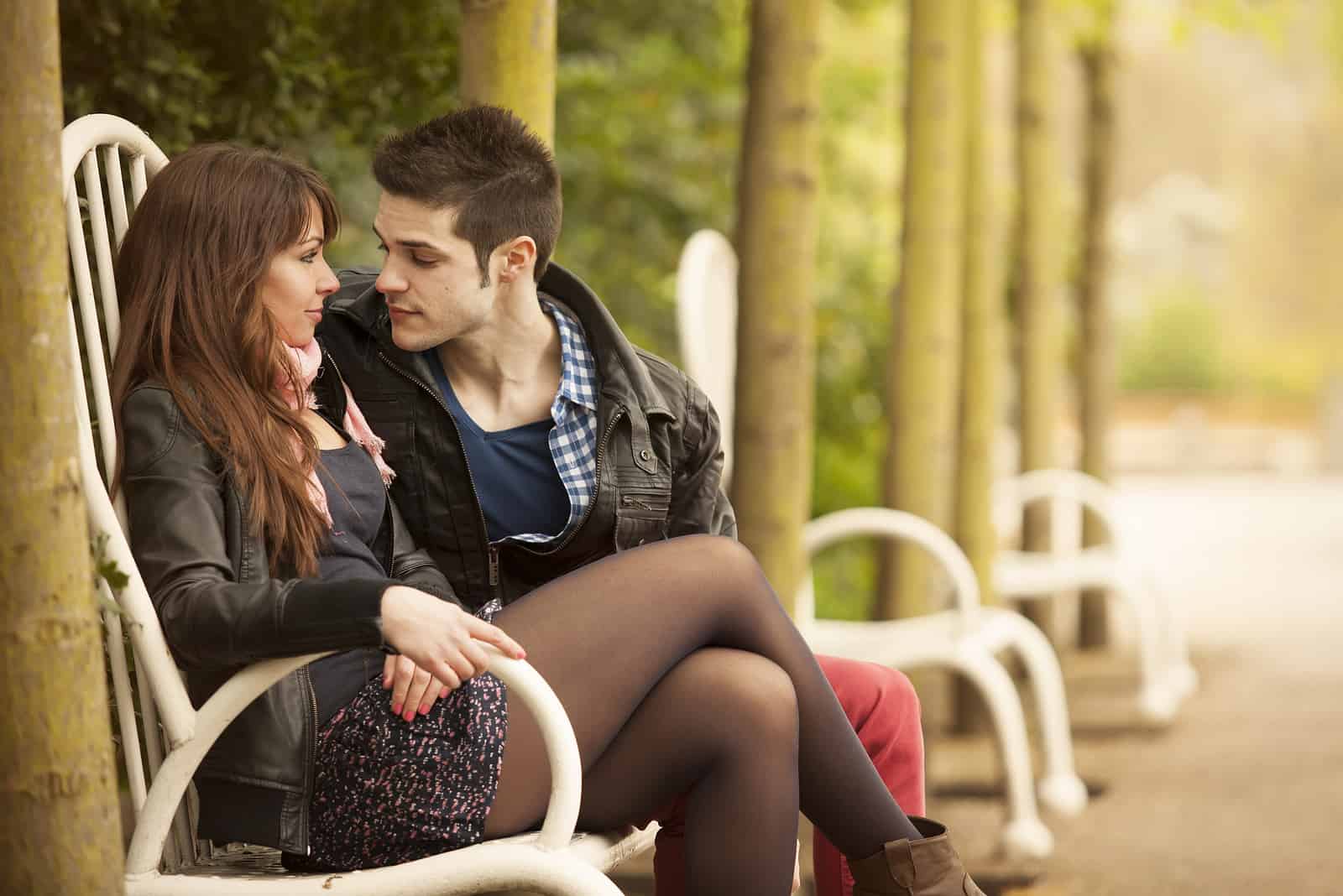 When a guy genuinely likes you and finds you attractive, he either:

a) Tells you that openly and honestly ASAP.

b) Tells you after some time.

Lord knows that those guys under the a) category are in the minority. The only time a guy would say exactly what he means and how he feels at the most reasonable time possible is when he knows exactly what he wants and when he’s not afraid of expressing his feelings.

The chances for that to happen are extremely rare, if not non-existent. That’s why we have the second category of guys who decide to tell you how they feel about you after some time, which is, in a way, okay.

The most challenging category of all is the last one. When a guy doesn’t tell you anything about how he feels about you, there’s nothing you can do about it but rely on the oldest “romance method” called overthinking.

You can waste tons of your time trying to figure out what exactly is going on in his head and how you can help him open up to you. There’s nothing worse in the universe than falling for someone who is obviously not on the same page as you.

Well, you can either do all that OR you can pay attention to what his body language says about him. When his words fail to express his feelings, his body certainly won’t.

Here are some of the most obvious body language signs he secretly likes you:

It’s one of those stupid smiles when he nor you have any idea why he is in a smile mode all the time. Don’t get irritated by it because this is a good thing. His body language is telling you that he can’t help himself but feel energetic and exude positive vibes in your company.

RELATED: 13 Unmistakable Signs He Wants To Kiss You

Why would he do that if he wasn’t interested in you, right? Obviously, he wants to impress you with his looks, and that’s why he has to make sure to fix his hair and outfit.

Well, that’s really embarrassing, but it can happen to anyone who really likes the person they’re hanging out with. His legs and hands will evidently shake, and you might think he’s having a seizure. Don’t worry, he isn’t. Nervousness is one of the biggest signs he’s totally into you.

Never underestimate the power of a subtle touch. The reason why a guy subtly touches you is because his brain commands him to do so. He has this strong urge to be as close to you as possible, so even a subtle touch will provide him the desired satisfaction.

If he’s not into you, his body language won’t deny it 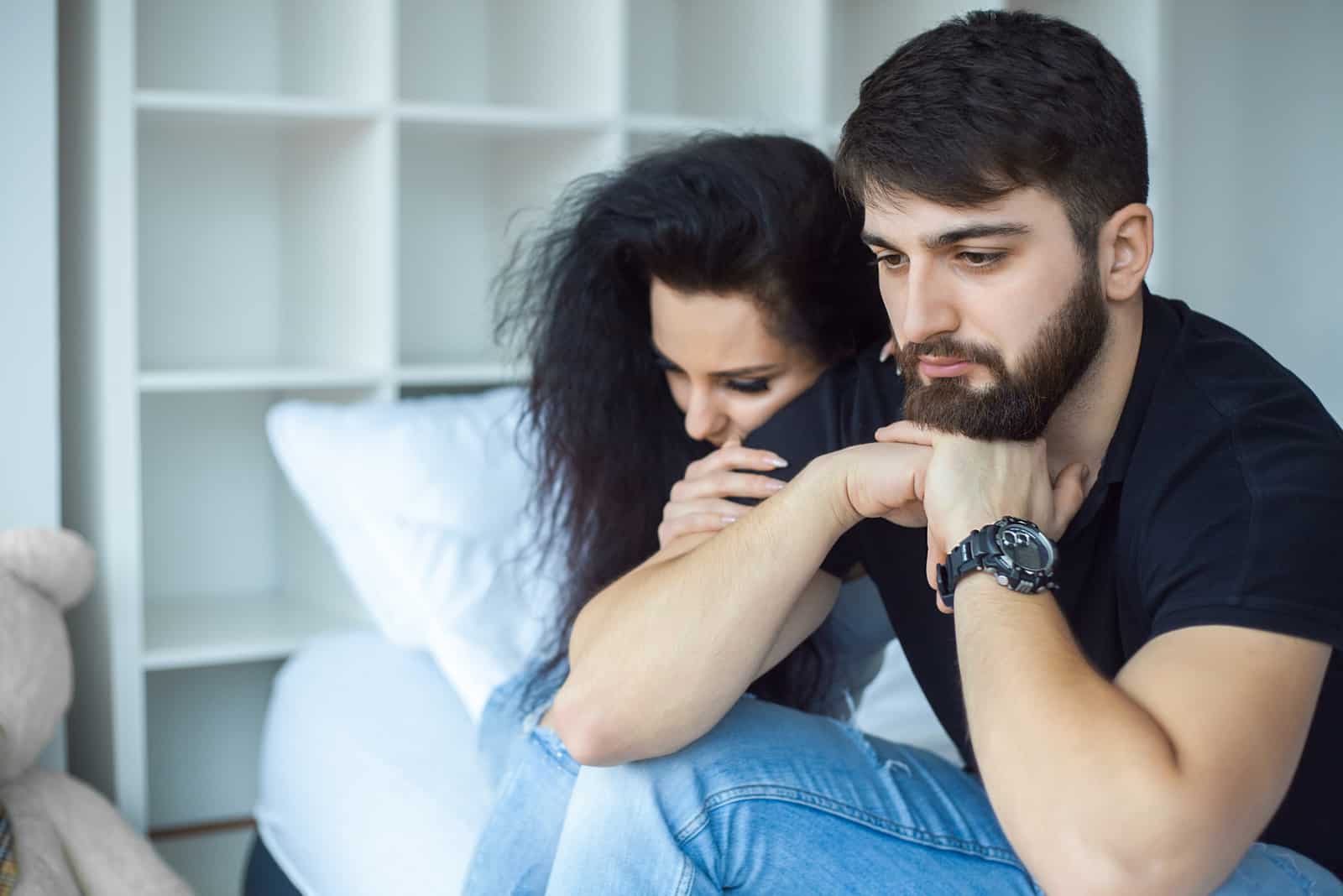 If a man is not into you, the first signs you’ll notice are the following: making lame excuses, acting super weird, sending mixed signals, waiting too long to text you back, annoying you in every possible way.

Even though we’re perfectly aware of all these things when they happen, we still can’t help ourselves but start making excuses for his behavior like: Oh, he’s probably too busy, and that’s why he didn’t text me. He has probably had a bad day, and that’s why he’s acting weird.

NO MAN is ever too busy to send one text to you. Everything else is just excuses.

NO MAN can have such a bad day that it will make him feel weird for the next few weeks. Everything else is just excuses.

You have a choice here. You can believe what he says to you and keep making excuses for his behavior OR you can focus on what his body language says about him. I recommend doing the latter.

Here are some revealing body language signs he’s not into you:

If you notice that a man avoids eye contact, this is a huge red flag. He’s doing that because he’s obviously not interested in what you have to say to him. He just pretends to listen to you while his mind wanders to other spheres, such as thinking about drinking with his buddies later.

If there’s anything I hate most in life, it is fake laughter. Why in the world would you fake your smile? To make others feel good about themselves? Or, to hide some sneaky intentions of yours? I bet the latter is the case, so that’s how you know he’s not worthy of your time or attention.

If his arms are crossed when he’s with you (assuming that it’s not cold), it means the following: Woman, I’m trying to create some kind of barrier between you and me. Don’t you see it?

He’ll do that when he doesn’t feel comfortable in your company, and obviously, isn’t on the same page as you.

If you see a man scratching his hair while talking to you, know that he’s TOTALLY confused and he’s probably not that into you, but has no idea how to tell you that. Yup.

Body language is your best friend because words are overrated 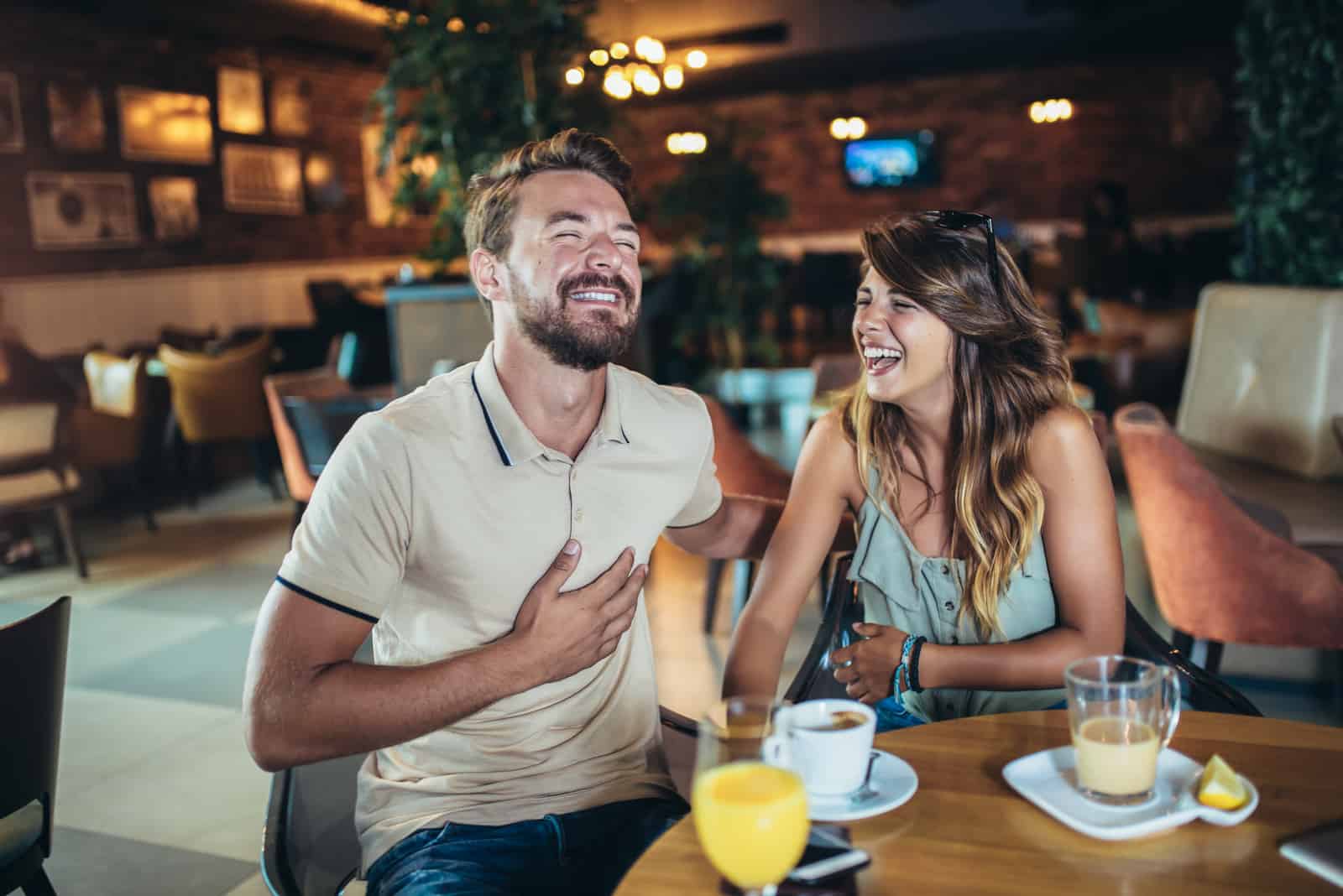 Let’s be honest. Men can tell us anything they want… they can pretend to be something they’re not, and they can keep hiding things from us. But, they will never know that one thing is not in their control, and that is their body language.

We live in times when words have never been more overrated, so it’s time to step up your game and implement body language signs into your romantic endeavors.

Protect yourself from the cruelty of unrequited love, commitment-phobes, players, narcissists, and other types of men who aren’t worthy of your overthinking and tears, let alone, your affection.

So, when in doubt, don’t make excuses for his shitty behavior, but check his body language signs and you’ll know exactly what’s going on inside his mind.

How To Tell He Loves You By His Kiss? 20 Common Types Of Kisses

[…] kisses and body language, on the other hand, tell a lot. Body gestures are key to knowing if he really enjoys kissing […]