In all the years I loved you, I can’t recall a single day where I had a peace of mind. A single day where my heart didn’t feel like it was about to jump out of my body and my mind going berserk from the emotional instability that had plagued us.

In all the years we loved each other, stability and security were the furthest things from what it felt like to be bound to you and your love.

I often asked myself if that was it for me. If that was what love was supposed to be like, because at the time I really didn’t know any better. All I had were the ideas in my head of a romance that would sweep me off my feet and make me feel like I could fly if I wanted to…

But reality was nothing like that. It was hard. Real life was something completely different and now I can’t help but wonder… was it my youth and inexperience that fooled me into thinking we could actually keep going that way or was I just a sucker for love?

You were my first real love and you will forever be engraved in my memory. You will forever be one of the crucial pieces of the puzzle I needed to feel whole… and as volatile as we were, it was real. We were the real deal.

I remember the beginnings of our love story… I was just a girl with a head full of ideals… who was so adamant she would find her Mr. Right and live her happily ever after, like it was the simplest thing in the world.

You were a rebel who wasn’t exactly in touch with his emotions but you fell for me, faster than you will ever admit, and our lives became intertwined so quickly and so strongly that it took us both by storm.

Neither one of us was ready for what came next.

It didn’t take us long to become completely, utterly addicted to each other. You were like the air I had been missing my whole life and meeting you made me finally breathe.

I was like a drug to you. A drug you desperately wished you could quit but the more you tasted, the more you were drawn to it and the more addicted you became.

I don’t know if we were aware of it at the time but we spent an upsetting amount of time with each other. I remember waking up and the first thing on my mind was you. If I went a day without you, it physically hurt… and I wasn’t strong enough to take it.

I needed to be with you. I needed to feel your presence next to me in order to feel like myself. You were my addiction, just as much as I was yours. There was no me without you and vice versa.

I finally realized how seriously disturbing this thing we had was becoming… and I finally tried to break away, just for a little bit, to feel if the air without you felt the same.

I needed to know if I was able to be myself without feeling your breath next to mine. I knew that the mad love I felt for you was ruining me on the inside. I didn’t want to escape it… but I knew I needed to.

I know you loved me. I know how much you cared. But what you never realized was how possessive you became. You couldn’t deal with me having a life outside of us. You couldn’t help but accuse me of being unfaithful if I decided to have a few hours to myself.

You loved me… but it was too much. I tried to show you how unstable we were becoming but you wouldn’t listen. You wanted me all to yourself and the thought of me not being there made you act like the man I didn’t realize you were.

The more time passed, the more I realized how wrong we were for each other.

Was love supposed to feel so unstable and turbulent? Was it normal to be so addicted to your partner that you forget about the world outside?

I didn’t know that loving someone could hurt so profoundly. At times, it was the easiest thing in the world… and other times, I felt like my soul was on fire and I was about to explode.

I don’t know why you couldn’t let me find myself before being able to see if we were salvageable. I still don’t know if I was the one to blame, with my foolish hopes and dreams, rushing into it like it was about to disappear into thin air…

Sometimes, I catch myself reminiscing about us. I can’t help but wonder, if we had just been a few years older and a little bit wiser, could we have figured it out?

Would you still be the man who couldn’t bear letting me out of his sight, always firmly holding onto me, making me feel like nothing existed but us… or would you be mature enough to realize that we both needed time to breathe individually, before giving it a real shot?

And would I be smart enough not to jump into a relationship that was doomed from the beginning, simply because I mindlessly hoped that the first man I felt this insane amount of love for would turn out to be my Mr. Right?

I really did love you more than I thought was possible. I just wish we had met at a time when we were both more mature and more equipped to deal with such an all-encompassing love.

I managed to get off this emotional roller coaster but I will never forget about the ride it took me on. It may have been all kinds of wrong… but it was as real as it gets. 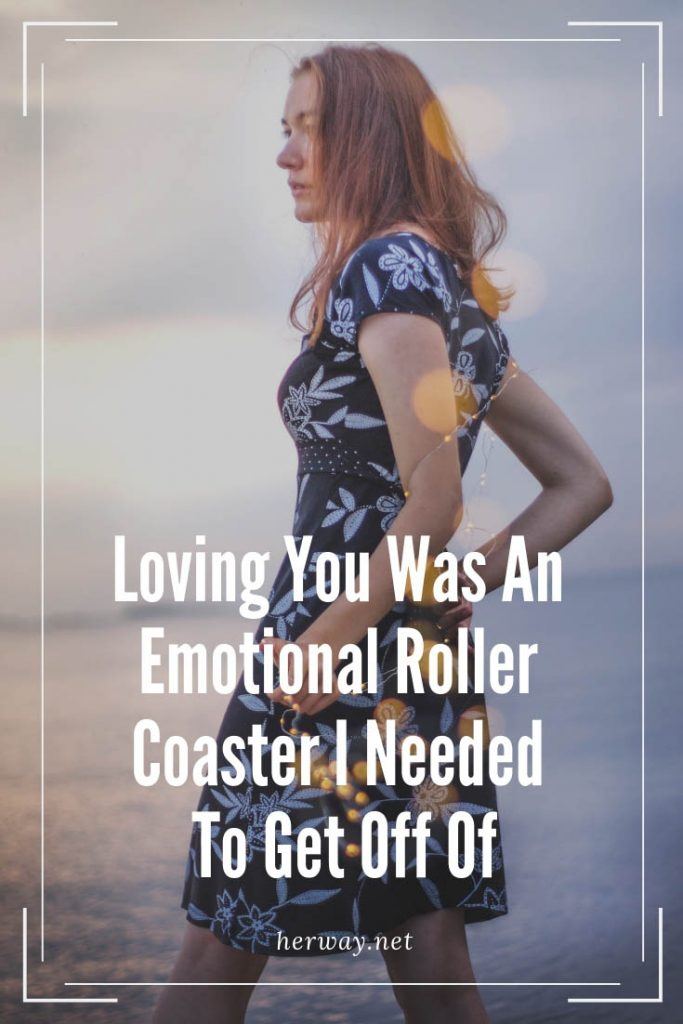